The Tropical Fruit Congress, held on 11th-12th May within the Macfrut fair in Rimini, was a sell-out. This first edition was dedicated to mango and avocado with speakers from across […]
Wed 16/05/2018 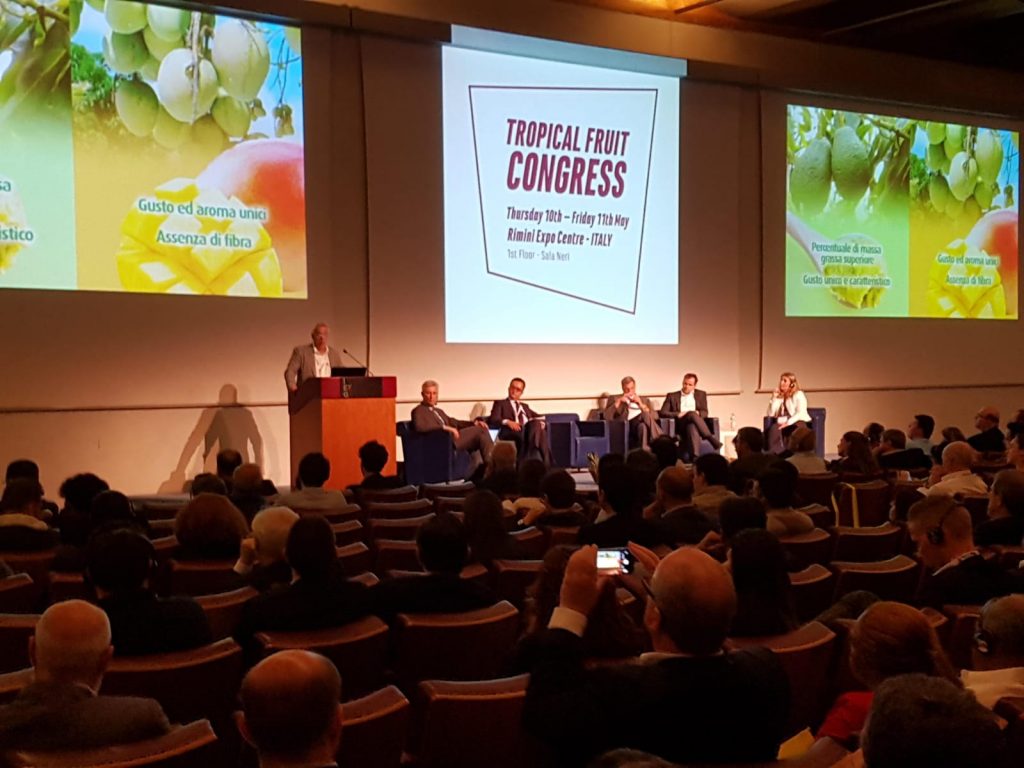 The Tropical Fruit Congress, held on 11th-12th May within the Macfrut fair in Rimini, was a sell-out. This first edition was dedicated to mango and avocado with speakers from across the world discussing production, trade and consumption trends. The first day focused on marketing and quality, while  the second day, coordinated by  the journalist Pierre Escodo, turned the spotlight on production.

Daniel José Bustamante Canny, president of ProHass Peru outlined how this variety is produced in Peru and other South American producing countries. “Chile is the oldest producer in South America, while Peru is the number-one exporter to European markets. Colombia is the real rising star and has been growing very fast in the past few years. It is the only country that can guarantee supply all year round.”

The Hass variety has conquered Europe and is the most cultivated in South America. According to AMAP data, in 2018 Peru expects to produce over 300 thousand tons of Hass avocado on an area of ​​almost 30,000 hectares. Chile, the second largest supplier of avocados to European markets, has an area of ​​23,500 hectares and produces 225,000 tons of Hass. In third place comes Colombia, with about 80,000 tons from 15,000 hectares. Now the sixth largest exporter to Europe, Colombia has seen exports to the continent increase by over 55% between 2016 and 2017 with a further rise of 33% forecast in 2018.

Outside South America, Europe also has a growing ​​avocado production area. Spain is now the world’s seventh highest producing country, with an area of ​​about 10,000 hectares and a yield of about 6,000 tons per hectare (12% of which is in the Canary Islands). Spanish avocado is entirely sold on the domestic market. Enrique Colilles, general manager of the Spanish company Trops, considered the situation in Europe regarding production, trade and consumption of both avocados and mangoes. “The avocado market is experiencing great growth in consumption in most EU countries, with an average annual per capita of 1 kg (2.5 kg in Scandinavia),” said Colilles. Between 2015 and 2017, European consumption recorded an annual growth of 20% and still has a lot of remaining potential. The industry is now focused on selling the fruit at the perfect degree of ripeness as the consumer is still not able to recognise when this fruit is ripe.” Italy has also started producing avocados, mainly in Sicily, with about 260 hectares on mainly abandoned or exhausted lands that have been reclaimed and converted to the production of this type of fruit.

Category: Uncategorized
Tags: 2018, avocado, Macfrut, mango, Rimini, Tropical Fruit Congress
We use cookies on our website to give you the most relevant experience by remembering your preferences and repeat visits. By clicking “Accept All”, you consent to the use of ALL the cookies. However, you may visit "Cookie Settings" to provide a controlled consent.
Cookie SettingsAccept All
Manage consent