The activities of Made in Nature – Discover the principles of European organic farming, the CSO Italy project funded by the EU, have kicked off in Germany. After being officially […]
Tue 02/04/2019 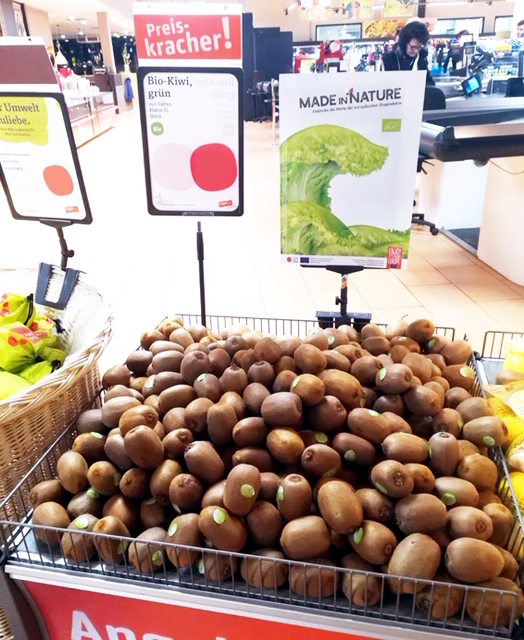 The activities of Made in Nature – Discover the principles of European organic farming, the CSO Italy project funded by the EU, have kicked off in Germany.

After being officially launched at Fruit Logistica, Italian organic produce has now arrived in Germany and will be the focus of many activities planned as part of the 3-year European project Made in Nature – Discover the principles of European organic farming implemented by CSO Italy. During the first in-store event, the spotlight was on Italian organic kiwifruit, produced by Brio S.p.A., a supporting partner of the project. For a week, dedicated island stands with information material were set up at 140 retail outlets owned by Tegut – one of Germany’s leading and largest supermarket chains and a pioneer in the field of organic and natural food since the 1980s – for German customers and consumers.

Italian organic kiwifruit is well-known and appreciated across Europe for its certified production methods, for its cultivation in the most suitable production areas, which are regarded worldwide as key areas in the northern hemisphere, and for the undisputed expertise of Italian producers.

There are two popular varieties of organic kiwifruit: green-flesh kiwifruit, which has an acidic taste and soft texture, rich in fibre and vitamin C, and yellow kiwifruit, which is sweet and aromatic with a tropical taste.

The promotion of “Made in Nature” in Germany is part of the many trade and B2B activities planned for the project that is aimed at promoting the values and culture of Italian organic fruit and vegetables and is targeted to consumers and sector professionals in Italy, France and Germany, which will continue in the next few months with communication and social activities, promotions at retail outlets and participation in trade fairs, including the upcoming Macfrut in Rimini.

Category: Uncategorized
Tags: kiwifruit firm, Macfrut, Made in Nature, Organic, Rimini
We use cookies on our website to give you the most relevant experience by remembering your preferences and repeat visits. By clicking “Accept All”, you consent to the use of ALL the cookies. However, you may visit "Cookie Settings" to provide a controlled consent.
Cookie SettingsAccept All
Manage consent