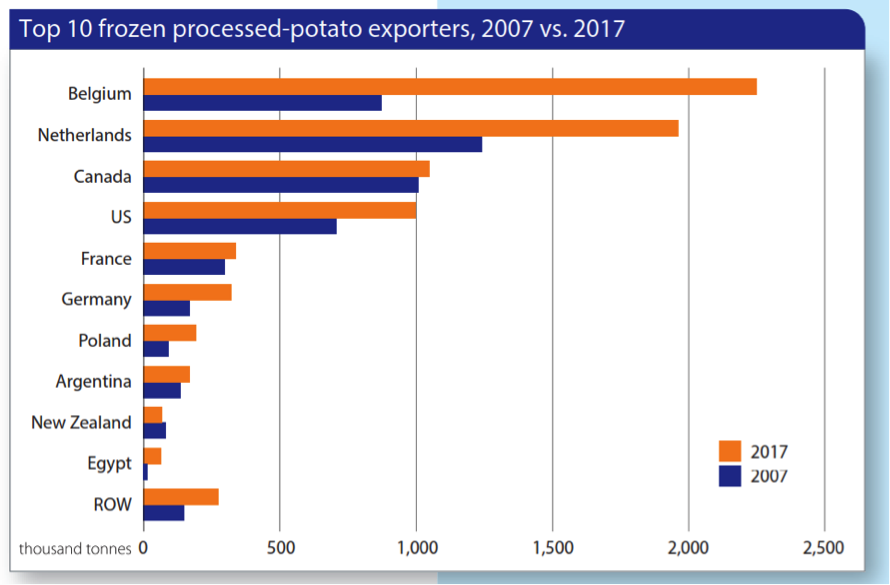 According to Rabobank’s World Potato Map 2019, north-western European potato producers benefited most from the growth in global trade over the past decade. The trade in fresh, seed, and frozen processed potatoes accounted for around 7% of total potato production in 2017, with the rest consumed locally. Despite the small proportion, the international potato trade is starting to grow.

Frozen processed potato trade has increased from around 4 million tons to over 7 million tons in the past ten years, due to rising consumption in Asia, the Middle East and Latin America. Dutch exports dominate the trade in seed potatoes, with a market share of over 50% of global trade. The four main exporters of frozen processed potato are the Netherlands, Belgium, Canada, and the US, representing 80% of volumes. Belgium, in particular, has seen its share of global exports rise from 18% in 2007 to 29% in 2017.

As for fresh potatoes, between 2007 and 2017, exports rose by around 2.5% annually. Most of this trade is concentrated in Europe, particularly in imports by the Netherlands and Belgium to feed an expanding processing industry. Elsewhere, China, Pakistan, India, and Egypt are also starting to become major players in the fresh potato market. Between 2007 and 2017, Egypt saw its fresh potato exports almost double to 652,000 tons, while quadrupling its frozen processed potato exports.