Sweden, Denmark and Finland – with a combined population of about 21.7 million – continue to lean heavily on imports for their fresh fruit and vegetable supply, but last year their combined volumes were lower than the previous year for the second time in a row, with fresh fruit imports 2% below the 2018 level.
Sun 13/11/2022 by Julie Butler 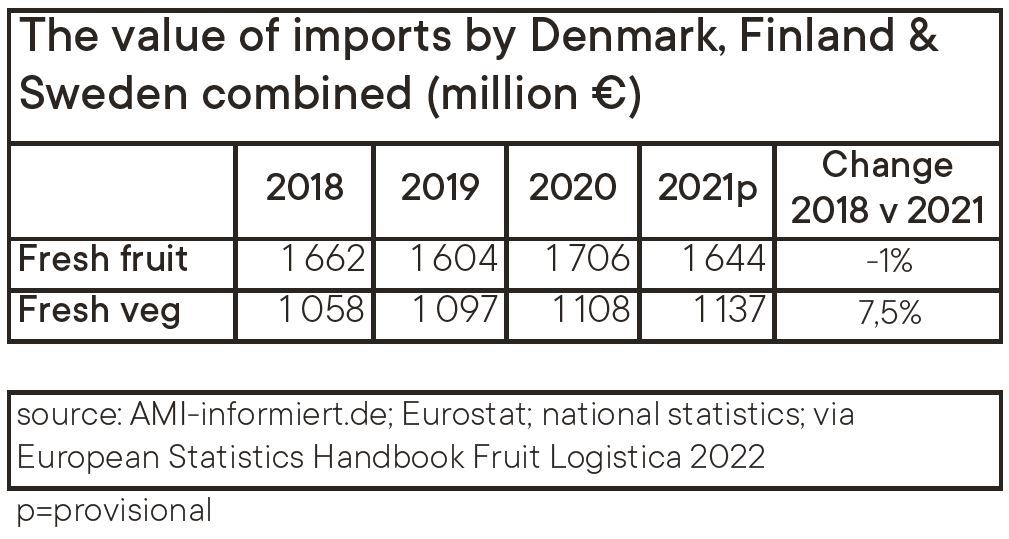 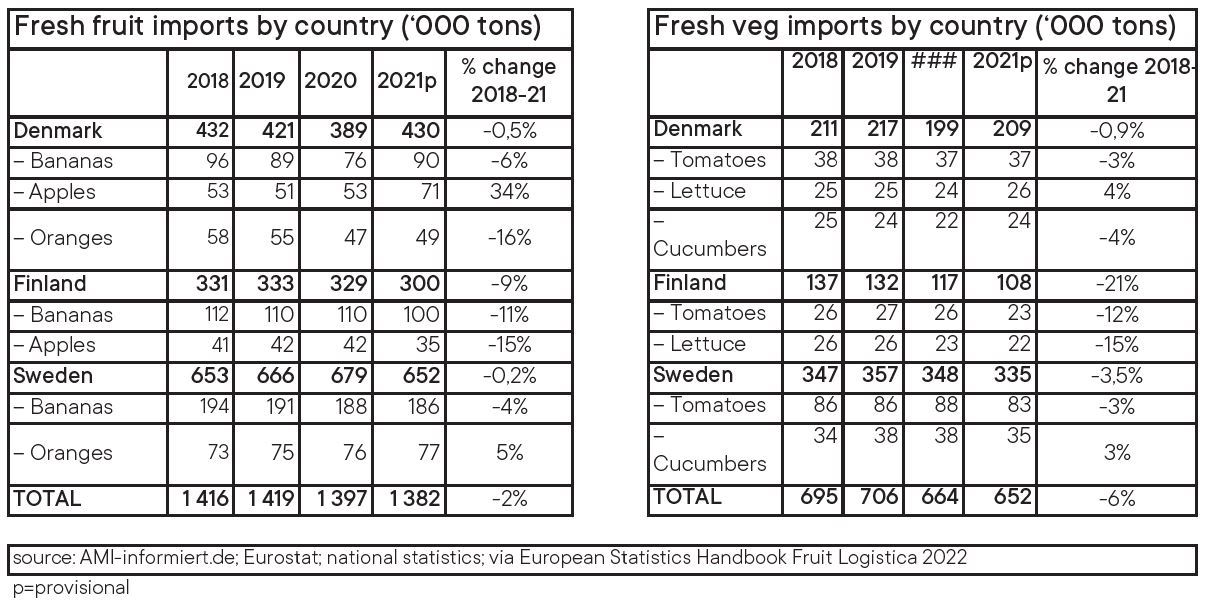 Their climates limit domestic production, so Denmark, Finland and Sweden rely heavily on imports to get their fill of fresh fruit and vegetables. The trio imported nearly 1.4 million tons of fresh fruit and 652,000 tons of fresh veg last year, totals 2% and 6% respectively lower than in 2018, based on data in the Fruit Logistica 2022 European Statistics Handbook. “Rising transport costs and a temporary lack of sales opportunities in the hospitality sector were probably the main reasons for the decline in imports,” the handbook says. In value, however, fresh veg imports came in 7.5% higher than four years ago, at a total of over €1.1 billion, while that for fruit was down 1% to over €1.6 billion.

In 2020, the top fruit import volumes for the three countries were bananas 374,000t, apples 183,000t, oranges 156,000t, watermelon 115,000t and easy peelers 108,000t, while in vegetables, tomatoes led with 151,000t, followed by lettuce 83,000t and peppers 69,000t. Seasonality plays a key role, with products like cucumber met by domestic production in summer but imported in winter. Compared to about a decade ago, the highest annual volume growth has been in sloes (+19%), cornichons (+18%), raspberries (+14%), persimmon (+12%) and witlof chicory (+12%). Apples and strawberries (mainly greenhouse) lead the fruit production volumes for all three countries, while carrots come top in veggies. Sweden is almost self-sufficient in carrots, which are found in stores year-round.

At about 10.4 million, Sweden has the largest population of the three countries, compared to Denmark’s 5.8 million and Finland’s 5.5 million. Tomatoes, peppers, lettuce, cucumber, garlic and onions were its most imported vegetables in 2020, but the strongest growth since 2016 was in roots and tubers, celery, mushrooms, pumpkin and squash, cabbage and other edible brassicas, according to Open Trade Gate Sweden, which also reports rising demand for blueberries, blackberries, stone fruit and pomegranates, as well as avocado, garlic, sweet potato, turmeric, organic ginger, peppers and asparagus. Sweden’s main sources of vegetable imports are the Netherlands, Spain, Germany, France and Denmark, while for fruit they are the Netherlands, Spain, Germany, Ecuador and Italy. Spain is its top orange source but off-season, Sweden imports from Egypt and also buys South African and Egyptian oranges traded through the Netherlands and Germany. Nearly 80% of apples eaten in Sweden are imported, largely from within the EU but off-season from Chile and New Zealand, and there had been growing imports from Ukraine. Locally grown food, knowing where their food is from and reducing their climate footprint are all increasingly important to Swedish consumers.

The Danes dominate in organic consumption

Potatoes, tomatoes and lettuce are popular vegetable imports when it comes to the Danes, while for fruit it’s citrus, bananas, apple, pears and berries, though tropicals like pineapples, avocados and mangoes lead the way in value. There’s strong demand for organic produce in all three markets but particularly Denmark, where organic products account for 12% of overall food sales, the highest rate globally. (It’s 9% in Sweden.) The Danes import major volumes of organic bananas, oranges and lemons. Finland’s main fresh produce imports include bananas, citrus, apples, pears and EU-grown tomatoes and lettuce.