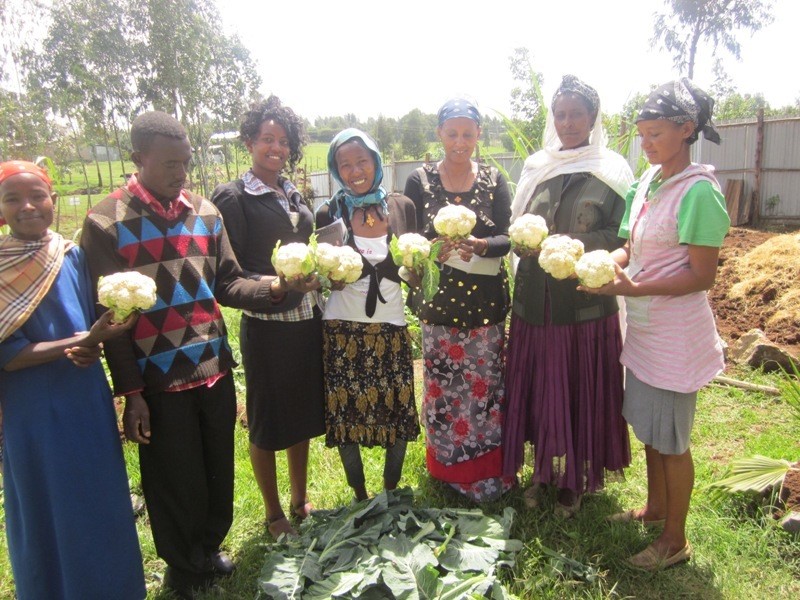 Vegetable seed company Hazera’s mission is to contribute to the supply of high quality vegetables all over the world. With this mission in mind, the company decided to support agricultural development in Africa, providing high quality seeds and expertise to support people improving their living conditions. In Ethiopia a development project that began with the adoption of one village is expanding now to 13 additional villages. Another project is supported in Holeta, where the Roseland foundation is developing the community through education and agriculture. More broadly, Hazera is training farmers all over Africa and is introducing vegetable varieties that can bring African farms to healthy profit.

The Ethiopian villages project was initiated and accompanied by Hazera together with its local distributor, Green Life. Challenge was to make local farmers more professional, so that they could better support their families. The project began in the small village of Gedenser, in eastern Ethiopia. Its agricultural potential called for a long-term investment, requiring the villagers to commit themselves to study and work in order to learn agriculture and make a living from it. Hazera contributed seeds to the project for 3 basic crops: onions, tomatoes and peppers. Hazera representatives brought together all the families involved, helped teach them to use organic animal manure for soil fertilization and provided agricultural equipment and supplies. After about a year, the villagers began to make a living from their produce. The project drew the attention of senior officials from Ethiopia’s Ministry of Agriculture and from 2017 the project will be expanding to 13 more villages in Ethiopia!

The Roseland Academy initially started as a school located in Holeta Town, near Addis Abeba. Besides ensuring education and taking care of the children, the foundation also wants to improve life standard by developing vegetable cultivation. Harvested products are used for healthy meals prepared by the children and their mothers. By now, production is even exceeding the needs. The surplus vegetables, such as tomato, cauliflower, onion, cucumber and pepper, are sold on the local market, generating income for the community that is re-invested in new development projects.

“Beside these two exemplary development projects, Hazera is providing farmers training in a range of African countries such as Tanzania, Angola, Uganda, Zimbabwe, Zambia, Rwanda and most recently in West-Africa, more particularly in Sierra Leone, Ivory Coast, Burkina Faso and Senegal. In the last country we were also present at the Congress of the African Seed Trade Association at the beginning of March.

There is much demand from farmers for expertise and good practices. Hazera can offer those, and our selected vegetable varieties and genetics fit very well to African climate conditions. Hazera is seeking cooperation with governmental institutions, NGO’s and unions to enhance agricultural development and yields. The dream is to create successful projects such as those in Ethiopia also in other countries. At this moment I’m seeing opportunities in Uganda or maybe Rwanda. It would be very honourful for us to have the success concept transplanted to other countries and, more important, it would be beneficial for farmers.”

In Ethiopia, Hazera is also active with seed production for its vegetable varieties, another way to introduce professional knowledge into this continent full of promise. A potential that is also seen clearly by Hazera’s mother company Limagrain, that has considerably strengthened its presence in Afica through its daughter companies and through several recent acquisitions such as Link Seed (South Africa) and Seed Co (several countries).

“Hazera aims to help feed the world’s growing population and develop agriculture throughout the world. By supporting and developing agriculture in Africa we can help millions of people to improve their living conditions”.