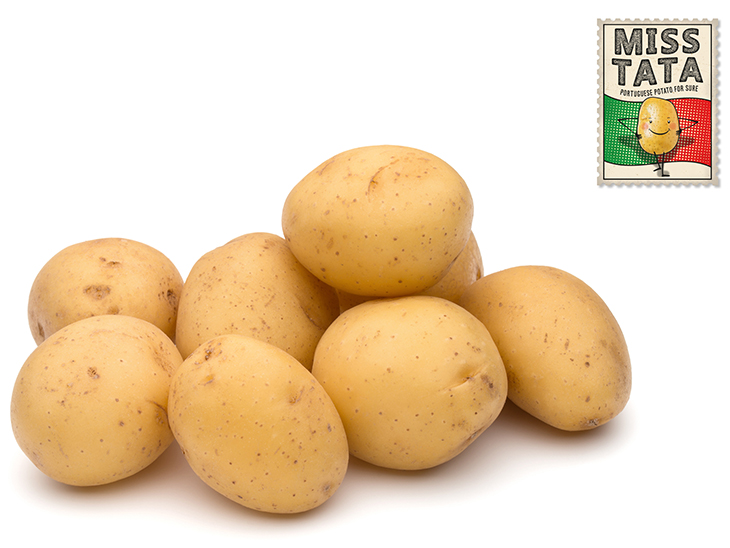 At a time when potatoes are being harvested in Portugal, the producer-members of Porbatata are going to use the Miss Tata brand on their packaging, so that it is easier for consumers to identify the product’s origin. This is the first time that the collective brand created by Porbatata is going to be visible on the packaging.

Porbatata has also run a Miss Tata marketing initiative in the European specialised media, particularly in Spain, the Netherlands and France. The aim is to spread the word about the collective brand of Portuguese potatoes and boost exports, at a time when this product is reaching the market.

Miss Tata was created by Porbatata to promote Portuguese potatoes, personalising this notable product in international cuisine. Fresh, new, just harvested and linked to a healthy diet, Portuguese potatoes are noted for being one of the first in Europe to reach the market.

“Porbatata’s mission is to promote Portuguese potatoes and this campaign uses the Miss Tata collective brand to communicate with consumers in a more personal way.”

In 2020, Portuguese potato exports amounted to over 18 million euros and the European Union was the main destination market. The country that buys the most Portuguese potatoes is Spain, accounting for 48% of exports from Portugal, in value terms.

Promoting the product internationally is part of the project for Promoting Portuguese Potatoes in Foreign Markets, supported by Portugal 2020 under the Competitiveness and Internationalisation Operational Programme.