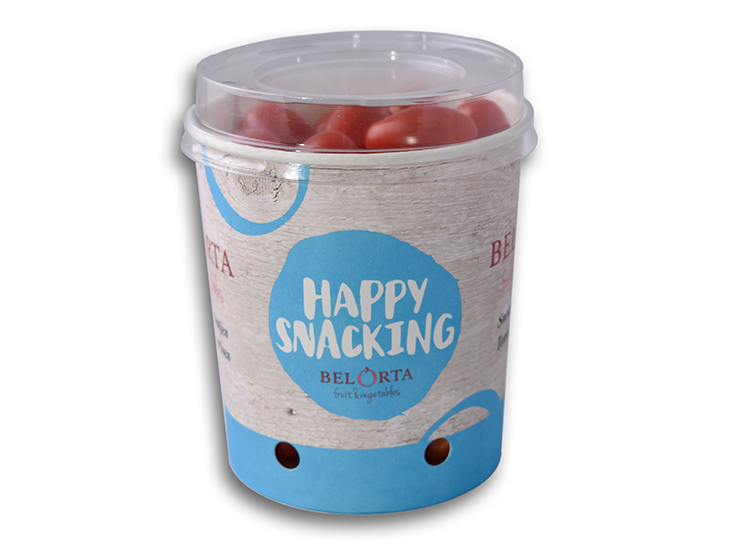 Belgium’s leading vegetable auction worked hard and quickly to shift products to the retail channel that were left unsold due to the closure of the food service channel. New consumer packaging formats and in-store promotions were promptly introduced, particularly for asparagus, cucumber, and lettuce specialties like Lollo Bionda. Overall, demand for packed products rose sharply. Recycled PET punnets, which had already been successfully introduced, became the most popular. “We have seen a shift back to packaging for hygienic reasons,” said Jo Lambrecht, marketing manager at BelOrta. More sustainable solutions were also introduced, such as cardboard-based banderoles for organic vine tomato. With the rise of the snacking trend, BelOrta has accelerated its shift from plastic to carton solutions, and now offers 500g buckets of snack tomato, peppers, radish and blueberry.

Higher volumes of vegetables with better-quality

A survey conducted by GfK in Belgium found that 38% of consumers are eating more vegetables and less meat than they were five years ago. Indeed, retail vegetable sales increased 20% over the same period, according to Lambrecht. BelOrta, too, has seen Belgian consumers shift towards local vegetables. The GfK survey also found that 24% of consumers are eating more local vegetables, a phenomenon that has accelerated since the Covid-19 outbreak. “We have observed a growing interest in consumers looking for recipes, with a higher number of visits to our website https://www.belorta.be/keuken,” said Lambrecht. Meanwhile, BelOrta has strengthened its cooperation with public radio and TV to raise awareness of fresh fruits and vegetables and local produce. One such example is TV cooking programme Un Zeste Local, which uses BelOrta vegetables. The auction has also supported the opening of summer parks, such as with the creation of “The BelOrta Farm” vegetable corners at the Plopsaland theme parks. The goal is to educate young children by showing how vegetables are grown. Product tastings are also taking place in three parks.

The Flemish Minister of Agriculture was in Borgloon for the launch of the cherry season. During the ceremony, a cheque was presented as a donation to cancer research.  The next BelOrta Product Show will be held on October 8-9, where customers worldwide are invited to come and taste all of the BelOrta products in a single location. The firm, which supplies over 50 tomato varieties, has introduced several new vegetable varieties this season, like Sopropo bitter melon, sugar snap peas, and edamame (sweet soybean). BelOrta has also launched new packaging formats, such as the 2kg cherry box, as well as other products packaged in top-seal rPET punnets. Packing capacity has been increased at the company’s Borgloon and Zellik centres, with new top-seal lines.

A major campaign to promote the consumption of peppers has been launched in France, with brochures and gifts given out to consumers at points of sale. Also, from July 1st, a TV campaign will run on FLAM to promote Belgium’s organic produce, including its fruit and vegetables.

The shift from strawberries to other berries continues. This has been aided by the introduction of new varieties to extend the cultivation cycle of raspberries and blueberries. BelOrta has also increased its winter production of tomato specialties, like vine tomato, beeftomatoes and Ruby Red, with 5ha more glasshouse area under light to a total area of 90 ha. The auction also proposes more winter cucumbers, in total 7ha under light. What’s more, BelOrta aims to start exporting organic produce this season. The auction now offers organic blueberries, with 25.5ha of certified plantation in production. It has also increased supplies of organic endives, cucumbers and leek.