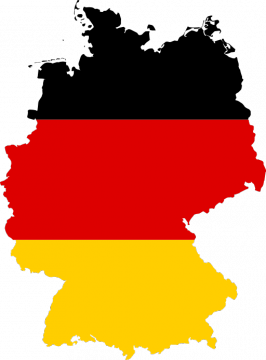 Germany is the largest market for organic products in Europe and the second biggest in the world, after the US.

It is also Europe’s main organic producer but nevertheless is increasingly dependent on imported organic products, not just for products that aren’t grown in Germany but also for potatoes, fruit and vegetables, dairy products, meat and others, according to a new GAIN report.

There are good opportunities for US exporters of organic products but also challenges, it says. “Success in introducing food products depends mainly on knowledge of the market and personal contact.” It recommends that US suppliers analyse German/EU food law, packaging and labelling requirements, business practices and trade-related laws and tariffs, potential importers and the distribution system.

It also says that purchasing by German food retailers is fragmented and competitive. “Few German retailers import products directly from other countries, except for items that they purchase in large quantities. Most food retailers would rather buy from central buyers/distributors importing food and beverages.”

A certain amount of product diversity is important, but it must be meaningful for the consumer, he stressed.

Speaking during a panel discussion at the London Produce Show in June, Weist said achieving a change in a product, such as in the degrees Brix, might be a technological achievement, but if the consumer can’t taste it, it won’t drive sales.

Customers are looking for outstanding eating quality and will pay good money for it, but they won’t come back just because of a product’s technical aspects. This is something many retailers in Europe need to pay more attention to. “I see in many places, that the change has to become more consumer-centric,” Weist said.

What has changed in recent years is the ability to better measure consumer data, to find out “whether you delight consumers enough.” So, for example, retailers can adjust package sizes such as of salad so the price is right and the food stays fresher. They are doing this better, but there’s still a lot of room to grow, he said. 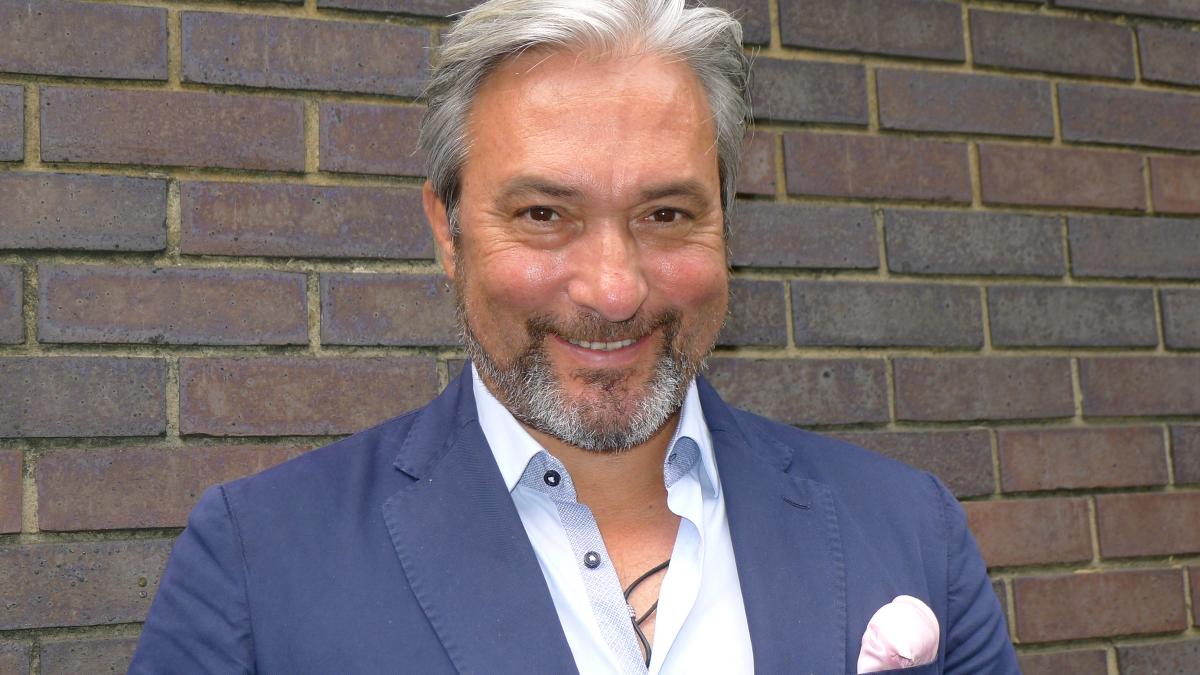 Give consumers more choice, but don’t overwhelm them

Speaking to ED after the panel discussion, Weist said tomatoes are an example of a category that has undergone a lot of product diversification in the last decade in terms of different tasting varieties.

“You have tomatoes which are extremely sweet down to a tomato which tastes like almost nothing and we have them all on offer, unfortunately even the ‘bad’ ones, because they serve as a price entry but for cooking they’re still fine.

“Today, if you look in an average shop, you have about 20 different varieties of tomatoes so I think we have to reflect on whether we’re getting too complex for the consumer at the end of the day,” he said. This is particularly important in Germany, where consumers want to be in and out of a shop fast.

Differentiation has also been seen with peppers, with the Padron peppers popular for frying and the longer pointed peppers, with a higher sugar level, enjoyed raw. Weist said Rewe is seeing ‘certain growth’ in pepper sales, adding he thinks “growth comes with meaningful differentiation, but meaningful not for the industry but for the consumer.”

On salads, Weist said what stands out most is the growing assortment of pre-cut salads. But in standard salad ingredients there is only slight growth. “We might see growth in the overall category but because it has become more fragmented into more varieties we don’t necessarily see the old varieties, like iceberg or a standard lettuce, growing.” 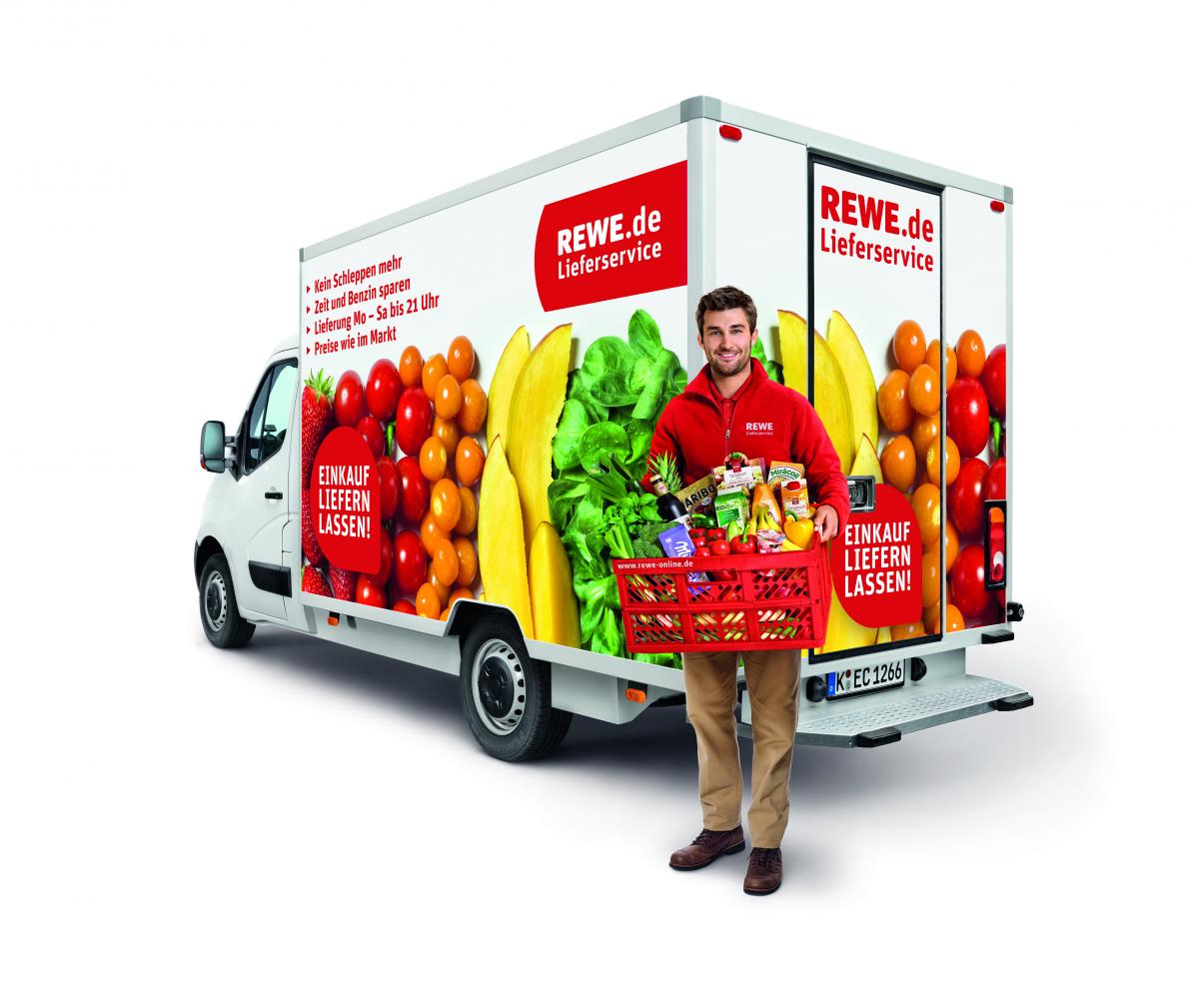 Asked about trends in grape demand, Weist said Germany, and most countries of Europe, are leaning strongly towards seedless grapes.

“What we have seen lately is the arrival of new and more interesting varieties, which have a very particular taste, though that’s still more or less on test levels because there’s not a lot of fruit available there yet.”

Overall, the whole family of light-colored seedless grapes are the top-selling grapes in Germany, he said.

Rewe generally offers its grapes in open bags but does use some clam shells for its price entry options. It sources from Europe – mainly Italy and Spain. Weist said better storage technologies and the extension of earlier and late varieties has seen the market share of this European production increase.

“After years of growing our display, but not necessarily our sales, like most other retailers, I think we have three categories of tropical fruit today,” Weist said.

One covers produce such as avocados, mangoes and pineapples, which have become a daily entry for German households. Excluding bananas, these three are Rewe’s top sellers in tropical produce. Weist said he no longer considers them tropical fruit, “but they still run in the statistics as such.”

“This is a category which we’re extremely happy with. We almost exclusively sell pre-ripened fruit in this segment and it’s running well,” he said.

Then there’s lesser known produce which Weist said is taking off now. “Things like sweet potatoes and all the chili varieties and exotic herbs are becoming increasingly popular. I would still call them exotics, but they are becoming more a standard because people know how to use them. Maybe it’s a spinoff of all the growth in the burger industry right now we see in Germany.”

As for the ‘real’ exotics, such as the kiwano and curuba and so on, Weist said these are products that are “interesting to know but unfortunately not good to sell.” He said that could be because consumers are less familiar with them, or that they look nicer than they taste.

How Rewe aims to be consumer centric

Asked how Rewe has innovated in terms of fruit and vegetables, Weist said it has developed a lot of technical expertise designed to have fresher products on its shelves. “This is not only a refrigerating technique, it’s also distribution technique. It’s about determining the right size of units. Let’s say classical category management work, which we do, and so I think consumer centrism is what it’s all about.

“If we think about what’s important for the consumer, we will find customised solutions in many shops. It is not one solution for every shop but we customize and maybe that’s the innovation you will see in our stores.” 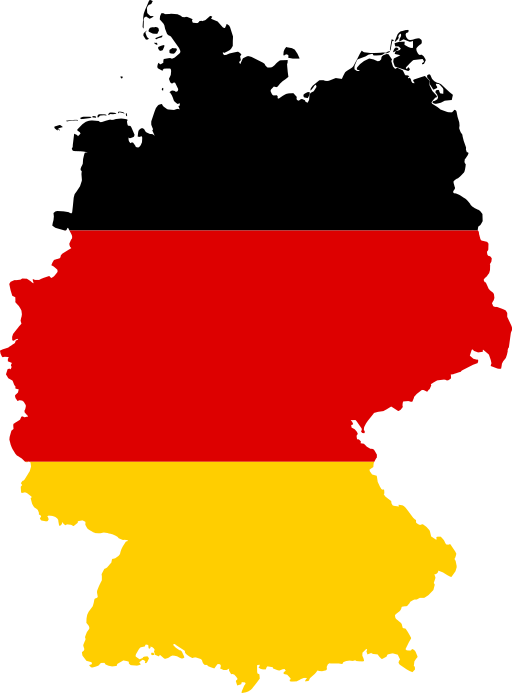 According to the German fruit trade association Fruchthandelsverband, the average daily intake of fruit and vegetables in Germany has plateaued at 250g per person – just over half the recommendation daily intake of 450g. Given the per capita intake in Mediterranean countries is 700g a day there is obviously room for expansion in German fruit and vegetable consumption. While the ‘5-a-day’ campaign has drawn attention to the importance of eating ample fruit and vegetables, research published by Germany’s federal health journal Bundesgesundheitsblatt shows just 15.1% of women and 7% of men in Germany adhere to this recommended quantity. And while Germans seem to eat more fruit as they get older, vegetable intake appears fairly constant across all age groups.

Popular fruits include apples, bananas and oranges, while tomatoes, carrots and cucumber are the top three vegetables purchased. Local products on the rise Strong consumer preference for local produce is another feature of the German market. Taste and freshness are the most important reasons for consumers to buy local. In fresh produce in particular, consumers value quality over price where regional products are concerned. A recent study by the consulting firm AT Kearney shows local produce is not just a once in a while purchase for the country’s shoppers.

Last year, more than 80% of Germans bought local products on a monthly basis (up from 72% in 2013). Furthermore, more than 60% did so on a weekly basis (up from 48% in 2013). Locally–produced goods are mainly recognized by the packaging or the labelling. Regional products are usually sold from weekly markets or directly from organic farmers (46%), small supermarkets (44%) and from large supermarkets (42%).

Discounters are among the most successful retail formats in Germany. But, as Germany’s food retail newspaper Lebensmittelzeitung signals, based on November 2014 data, the market for price–focused formats in this country seems to have become saturated.
Opportunities in online food delivery While the German retail market is stagnant – growth is only keeping pace with inflation – and becoming saturated, the market for web-based food delivery services is nascent. Though now a niche with just a 0.6% share of the total food market, it has a clear upward tendency, according to market research firm Dr. Grieger & Cie, which expects turnover in this sector to grow by 44% this year.

In line with being a net-importing country, Germany exports far less fresh produce than it imports, though its exports are increasing. Between 2011 and 2013, the value of fresh fruit and vegetables exports rose to €2.46 billion. The value of vegetable exports is lower than that for fruit but growing faster.

This is an abbreviated version of an article which appeared on p38 of edition 135 of Eurofresh Distribution magazine. Read the full article for free here. 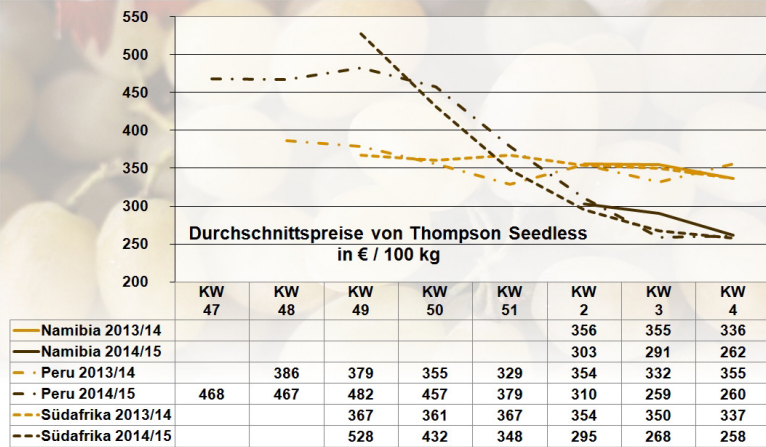 A glut of table grapes on the market earlier in the season has seen prices crumble in Europe, as this graph from Germany’s Federal Office for Agriculture and Food (BLE) shows.
In its market report to the end of week 4 of 2015, the BLE said South African growers are dominating table grape imports into Germany, mainly with the seedless grapes Prime, Flame and Thompson.
Also taking advantage of a window of opportunity as the Southern Hemisphere production winds down are suppliers from Namibia, with the same varieties as South Africa but also some Sugraone and Dan Ben Hannah.
The supply of Peruvian and Brazilian grapes has continued to taper off, the BLE said.
In 2013 Germany imported nearly 320,000 tons of fresh table grapes, with two fifths coming from Italy and an eighth from Greece.

Category: Uncategorized
Tags: Germany, South Africa, table grapes
We use cookies on our website to give you the most relevant experience by remembering your preferences and repeat visits. By clicking “Accept All”, you consent to the use of ALL the cookies. However, you may visit "Cookie Settings" to provide a controlled consent.
Cookie SettingsAccept All
Manage consent