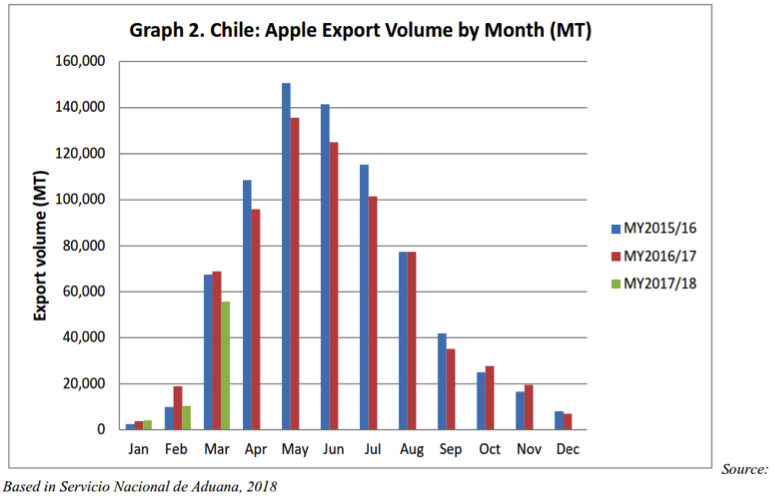 With abundant rainfall during the winter and water reservoirs at full capacity, enough water has now been stored up to meet the irrigation needs of the next five campaigns. Yields are expected to reach average levels of a normal year. Total planted area of apple has fallen slightly in the last three years, from 36,206 ha in 2015/16 to 35,937 ha in 2017/18 . Apple producers are converting Fuji orchards into more productive varieties such as Envy, Brookfield, Rosy Glow or Ambrosia, which are demanded by the export markets because of their superior taste, colour, post-harvest and extended shelf life.

Domestic consumption of fresh apples is expected to reach 240,000 tons in 2017/18, which is 24% of the total crop. A further 19% (300,000 tons) is used for processing, with the remaining 58% destined for export. The largest market for Chilean apples is the US, followed by Colombia and Taiwan. Largely as a result of the early harvest, exports of fresh apples in 2016/17 plummeted 35.9%  The 2017/18 campaign in contrast has been a regular year and harvest times for the different apple varieties have not been early or delayed.