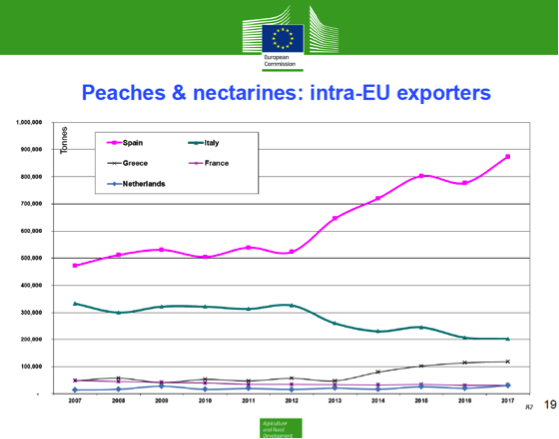 Intra-EU trade in peaches and nectarines measured 1.3 million tons in 2017.  Every year, Spain’s dominant position becomes ever more secure as Europe’s main producer of the stone fruits, and 2017 was no different. Spanish exports to other EU countries have risen steadily over the past decade, from below 500,000 tons in 2007 to almost 900,000 tons in 2017. Meanwhile, Spain’s biggest rival, Italy, has seen its fortunes go in the opposite direction. In 2007, Italian exports of peach and nectarine to the EU stood at around 330,000 tons, but by 2017 that figure had dropped to around 200,000 tons. Elsewhere, since 2013, Greece has seen a steady increase in its EU exports, reaching approximately 120,000 tons in 2017. Europe’s other main producers of stone fruit, the Netherlands and France, have recorded relatively low exports to the EU over the past decade, never exceeding 50,000 tons. The EU’s largest importers of peaches and nectarines are Germany, France, Poland and Italy.