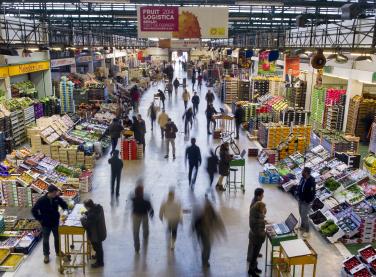 Mercabarna, located in Barcelona, is the major food market within Europe and the most significant one for trade in fruit and vegetables.

In 2015 the companies in Mercabarna sold 1,700,000 tons of fruit and vegetables. Furthermore, according to Josep Tejedo, director general of Mercabarna,

“in the first six months of 2016 we already exceeded the volume sold last year by 6%, so we hope to end this fiscal year with a sales volume above that of 2015.”

Without a doubt, the pace of the market’s activity is extremely positive. It is important to underline that 74% of the products sold by Mercabarna are from Spain and 26% imported. In the first six months of 2016, 31% of the fruit and vegetable produce was exported, the rest being earmarked for sale in Spain.

As for exports, Tejedo said that as these are a significant source of business for many of the companies on the premises, Mercabarna will continue to back export companies.

“At Mercabarna we study the markets our operators suggest. Then, in order to attract clients from the markets we consider interesting, we take part in fairs and organise direct and inverse trade missions,” he said.

The latest activities carried out by Mercabarna to attract foreign clients were aimed at promoting the activities of the companies in the Fruit Logistica and Fruit Attraction fairs in countries such as France, the UK, Germany, Italy, Poland and Dubai. The export activity of the operators in the food market’s premises focuses basically on Europe but, Tejedo said, clear business opportunities can be seen in countries on other continents, as in the case of Dubai. In such cases, an operation is launched provided there are a sufficient number of companies in Mercabarna interested in that market.

Faced with a growing presence of foreign purchasers from all over Europe who come to this market to get supplies of fruit and vegetables, Mercabarna opened this space within its premises this summer. Here one can find offices for rent for short periods of time with all of the services and technology that such traders may need. This September, the first clients settled into this new service we offer.

Mercabarna continues to grow—and not only in terms of trade; it is also working progressively on modernising the market. Already underway, this  project is expected to end in four years.

The first phase, which has already finished, involved renovating the water supply to the market’s seven industrial buildings. Soon work will begin to replace the roofing, make structural reinforcements, etc.

In line with the global aim, the wholesalers are individually carrying out work to modernise their stalls with cold rooms, panels, etc. It is worth noting that all of this work is being done without halting the market’s trade activity.

“Mercabarna is going to set up a pavilion selling organic products. In 2017, work will be done in order to launch it in early 2018,” Tejedo said. “Consumption of these products in Spain is still very low today, but it is gradually growing and there is a lot of demand from abroad, especially from countries in northern Europe.”

Another of Mercabarna’s significant projects related to its commitment to society and the environment is the ‘Strategic Plan to reduce food waste’ to 0%. “Even so, our global percentage of food waste is already very low at 0.5% thanks to the ongoing effort by the Mercabarna management and the companies there to increase donations to the Food Bank of food apt for consumption but not for sale (1 million kg in 2015),” Tejedo said.

“Moreover, 75% is recycled. Given the great amount of tonnage shifted in the market, these numbers are worth taking into account.”

In order to raise awareness among the 23,000 professionals who move every day through Mercabarna, the first step will involve signing a manifesto at the end of this September with the business associations operating in the market, which will include an entire series of commitments to tackle food waste.

“As for the investments to achieve this goal, we shall have to change all the infrastructures and operational dynamics we currently use in selective waste collection for the waste generated by the companies in Mercabarna. We have already begun to design the future Food Usage Centre (Centro de Aprovechamiento Alimenticio, CAA), which will also help foster recycling of such waste, making the most of the food that is left out of the commercial circuit. We hope to have everything up and running by the end of 2017.”