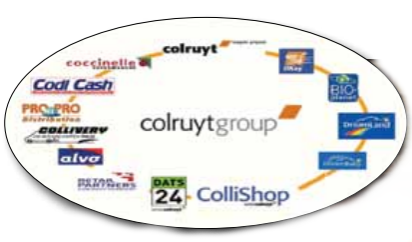 Colruyt expects increasing attention to health, sustainability and taste in tomatoes, which calls for innovation.

Having started out as a small family grocery shop, today the Colruyt Group has nearly 500 of its own stores and over 540 independent businesses in Belgium and affiliated shops in France. Colruyt not only offers retail store formats but is also active in wholesale, food service, fuel distribution, production of green electricity and printing and document management. Initially, there was only Colruyt Lowest Prices, but today in food there are different store formats, each with its own market position, brand promise and target audience.

Within the Colruyt Group, the procurement of fresh produce has been centralised. A team of 10 buyers and 2 department heads is fully responsible from the sourcing to the sale of the range of fresh produce. Stock, quality, purchasing conditions, margins, promotion, assortment and publicity are all aspects of the process that are dealt with by the same person for one or more product categories.

Evidently, logistics have an important role in this process, too. Colruyt works with central warehouses where the stock is kept to a minimum to ensure freshness. This implies fresh deliveries daily.

Packing takes place in Colruyt’s own packing division and is done based on the needs of a single day. For sourcing, there is a preference for Belgian produce. The availability is secure and produce of Belgian origin offers advantages in terms of quality, sustainability and food safety.

For Colruyt, tomatoes are an important segment within the fresh produce category.

“Tomatoes are versatile and are widely applicable,” said Jan Schockaert, head of the fruit and vegetable procurement department at Colruyt, during the international conference ‘Tomatoes, trends towards 2020’. “They have a penetration of over 98%.”

Tomatoes also guarantee a large chunk of the turnover, with a share of 6.47% of Colruyt’s turnover generated by fresh produce and 13% of vegetable (excl. potatoes) sales. Volume-wise, this means 3.13% and 4.63% respectively. The long-term average tomato turnover share sits at around 6% and may vary a bit due to price differences (source: 2015 figures supplied by the Colruyt Group).

The division between large and small tomatoes is almost equal: 49% of the tomato turnover comes from large tomatoes and 51% from small ones. Nevertheless, it should be noted that 2015 was the first year when small tomatoes outperformed large ones in terms of turnover.

In contrast, only about a quarter of the shelves was reserved for small tomato varieties: 24.27% in terms of volume, as opposed to three quarters for the large ones: 75.73% of the tomato volume. Although it has been stable for the last 5 years, since 1990 the diversity in the tomato category has expanded a lot.

Whereas Colruyt presented an average range of 7 different tomatoes to the consumer in 1990, there are 13 on average in 2015, with a peak of 18 tomato varieties in the high season. This leads Schockaert to conclude that an increase in SKUs does not generate extra turnover.

“The tomato shelves are considerably oversized and the limits to segmentation have now been reached. If new types are added, then another one must disappear,” he said. “The total assortment is so big that the consumer also has trouble choosing.”

Trend in taste: the case of tomatoes

“That is where the consumers find more taste in the tomatoes. The consumer is looking for taste.”

But he remains to be convinced that the ‘water bomb’ — the tasteless tomato from the eighties much discussed in the media — has completely disappeared.

“A tomato should taste like a tomato,” he said.

Schockaert considers too much attention has been paid to the tomato’s appearance, yield and shelf life. “Innovations are needed in terms of taste.”

He believes people are prepared to pay more for taste.

“I think the consumer particularly wants to enjoy eating a tomato.” He encourages growers to focus on taste and work that is market-oriented. In the future, there will be increasing attention on health and sustainability, but the predominant focus should be on taste, he said.