Add
The 5th edition of the annual international congress on organic demand, sustainability and post-harvest solutions took place October 4th & 6th at the Fruit Attraction fair in Madrid and was organised by Eurofresh Distribution magazine, IFEMA Madrid and Proexport, in collaboration with AREFLH, Ecovalia, EUCOFEL and FiBL.
Wed 02/11/2022 by Julie Butler 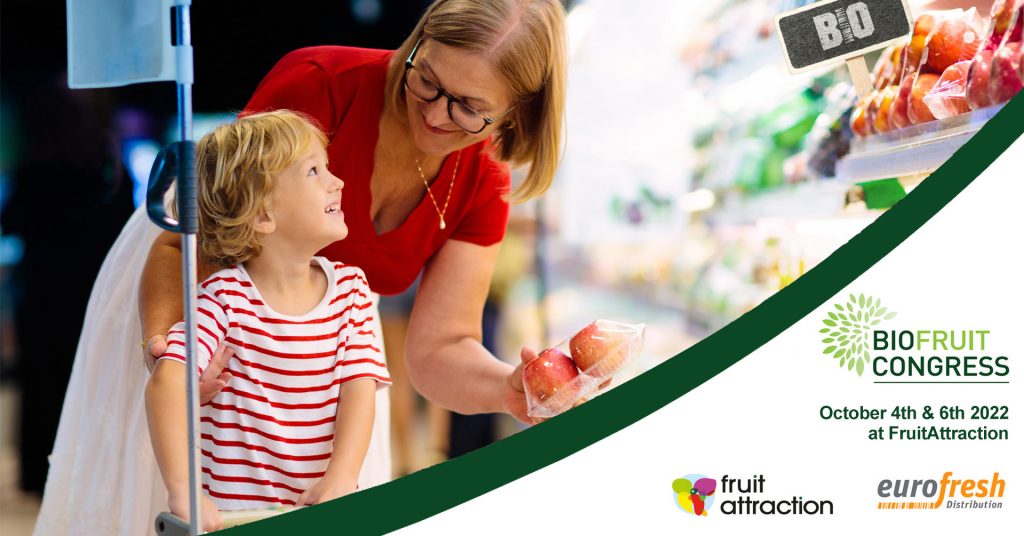 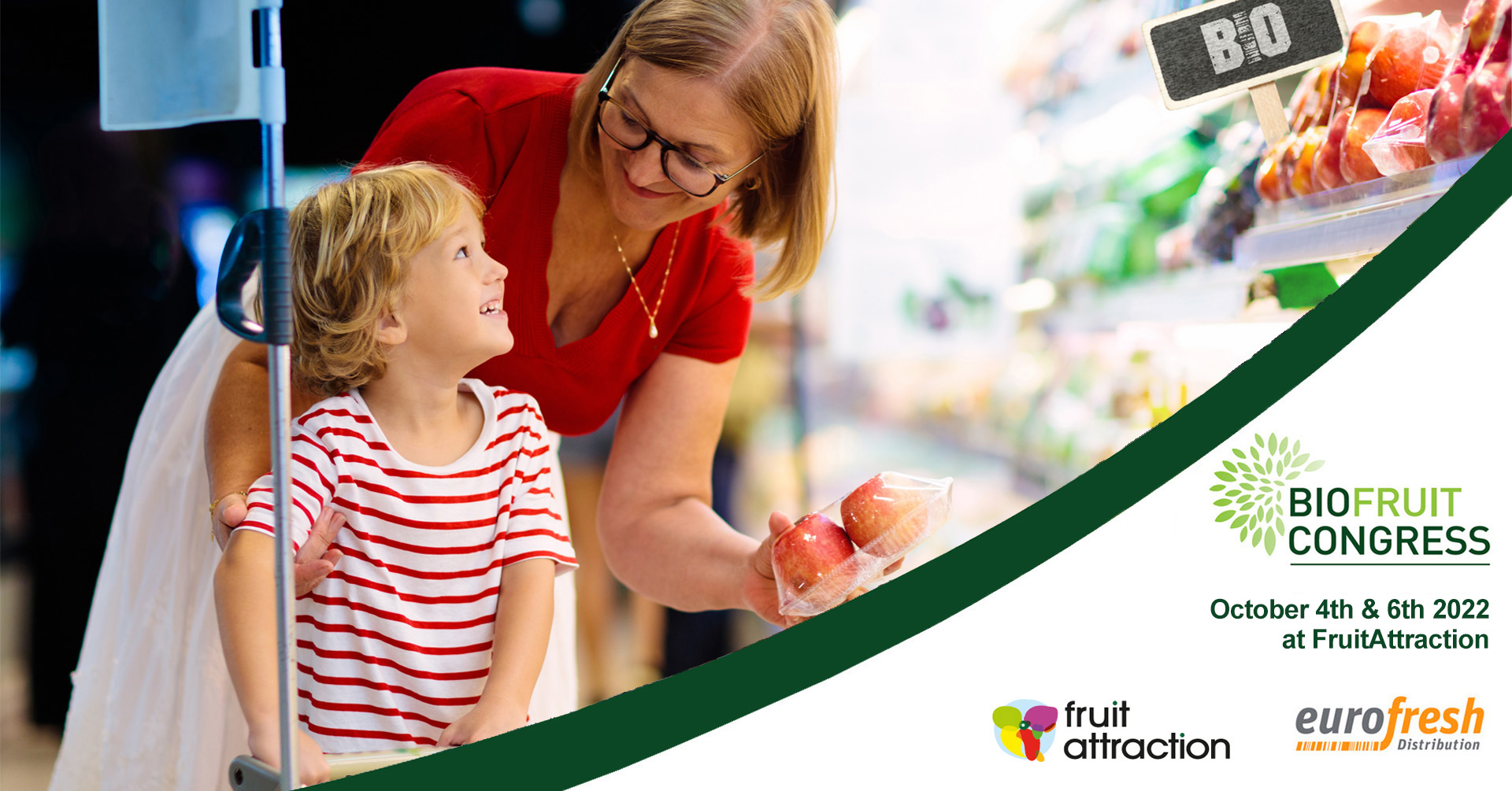 The Biofruit Congress, an annual fixture for the fruit and vegetable industry, this year took place in two parts, starting on October 4 with a welcome by Eurofresh Distribution and Asiafresh Distribution editor Pierre Escodo, followed by presentations from experts on the state of play and outlook for organic and sustainable supply and demand.

What’s next for sustainable F&V production and demand?

There’s a lack of sound data on European consumer demand for organic fruit and veg but the increase in EU production and imports, based on data to 2021, clearly shows growth, said Tomás García Azcárate, deputy director of the Institute for Economics, Geography and Demography of the Spanish National Research Council (IEGD – CSIC). Also helping make the European fruit and vegetable sector more sustainable are other approaches like Integrated Pest management (IPM) and zero residue schemes, which will be the new bridge between classic conventional and organic farming. Today these are a plus but by 2030, IPM will be basic, so “if you are not using IPM you will be outside, at least in the big markets,” García Azcarate said. On the EU goal of 25% of agricultural land under organic farming by 2030, García sees 3 possible scenarios, one being ongoing growth at the same rate to reach 15% at most by 2030, another being limited growth to just 10%, and a third scenario – “the most probable” – of somewhere in-between. García Azcarate cautioned that a political push for increased organic production could penalise producers with decreasing margins compared to conventional.

What are Europe’s conscious consumers seeking?

Euromonitor’s Voice of the Consumer survey found the top reason European consumers are choosing organic food in 2022 is the belief it is “better for me”, followed by “makes me feel healthier”, then environmental and food safety concerns, said Euromonitor senior food analyst Simona Bernatonyte. When it comes to sustainable sourcing claims on packaged foods, organic by far leads in terms of the number of SKUs it appears on, followed by Fairtrade, but use of the Fairtrade and Rainforest Alliance claims are currently growing nearly twice as fast as organic. And in terms of food product claims in general, organic remains the most popular in Western Europe – accounting for of 14% all claims on e-commerce platforms, followed by gluten free (10%) and vegetarian (8%) – while in Eastern Europe the leader is no artificial preservatives (10%) followed by organic (9%) and gluten free (9%), she said. With consumers also increasingly paying attention to transparency on ingredients, origin, production methods, ethical practices, packaging, and so on, how should organic food suppliers respond if they seek growth? Bernatonyte recommends focusing on having more impact on green issues as well as consumer concerns about health and food safety.

“Organic can no longer function in isolation, rather it should be paired up with other dietary or sustainability claims,” she said.

Naturkost Schramm imports organic fruit and vegetables from Spain and France and moves about 600-1,000 pallets a week to supply wholesale customers around Germany, with members of the DIE REGIONALEN association, representing Germany’s biggest organic food wholesalers, accounting for 70% of its turnover. Quality manager Aexandra Farnos said Naturkost Schramm has its own brand, SIVISIO, which is based on a social certification called “ecovalia +social” and already includes onions, cabbage, berries, and stone and citrus fruit. Germans spent almost €15.9 billion on organic food in 2021 and while environmental and climate protection were their top reasons for buying organic, 87% of all organic consumers also consider whether growers provide fair incomes and comply with social standards, she said.

Farnos said the figures for organic retail in Germany show that for many years there was a steady increase and in 2020, as in every country in Europe, there was a very big increase, but in 2021, sales decreased.

“Today we have 15% less turnover in fruit and vegetables and about 10% for all the other organic products,” she said. “People want to consume organic products, they want social standards, they want fair payment for growers, they want a lot of things, but at the end what matters is the money they have.” Nevertheless, the company remains optimistic: “because the decrease we see in the market is not a huge decrease compared to the high level of increase we had in the past years,” she said.

Barcelona-based Veritas, Spain’s leading organic retailer, says its mission is to increase the life expectancy and quality of life for people and the planet through organic food and a sustainable lifestyle.

Chief Communication, Marketing & Impact Officer Sophie Pagnon said the main reasons its customers choose Veritas is a desire for healthy food, followed by its diverse offering (6,000 items), as well as factors such as better tasting products, values, local products and customer service. While only 10% Veritas customers overall buy its organic fruit and vegetables, 22% of those who are part of the chain’s loyalty scheme do so.

“We know that 30% of our customers are still buying zero fruit and vegetables from us, though of course we believe that they do consume them, so that’s a very big opportunity for us in terms of commercial actions.”l For fruit and vegetables available both loose and pre-packed at Veritas, 88% is sold loose, she said.

In 2021, Campiña Verde sourced 142,000 tons of organic fruit and vegetables for German retail group Rewe, whose organic sales in its Rewe and Penny supermarkets in Germany rose 82% over 2017-21 to reach more than €400 million.

Campiña Verde managing director Jose Tienda said growth in organic is far outstripping that in the overall food sector in Europe and two big factors expected to continue driving growth in the next few years are Covid, which made people more health-conscious, and the fact that Generation Z has a special focus on the environment and vegetarianism and prefers organic products.

“We expect organic will double in the next five years,” he said. There are trends in Europe that are both challenges and opportunities for organic suppliers, including consumer demand for products and packaging that are more sustainable – or no packaging – as well as for good prices, he said.

How to achieve a more climate-friendly food supply

Next up was a panel discussion on how to increase sustainability. First up, Murcia-based G’s España technical director Christopher Abram said G’s is transitioning its operations to be based on regenerative agriculture principles – such as maximising biodiversity and improving soil health – on both its organic and conventional farms in 5 countries. It is also working to increase its carbon sequestration as part of a goal of being net zero carbon. Abram also talked about the importance of data-driven decision-making, for instance using drones to count the number of and growth stage of lettuce heads.

“We’re harvesting every single day of the year so understanding our availability is key,” he said.

Ecovalia general secretary Diego Granado Cumbres then shared on research showing EU organic crops in Mediterranean regions have a smaller carbon footprint than their conventional counterparts “and for citrus fruit, we’re talking about a reduction of 60%.”The study took place, “because we were tired of having to demonstrate that organic production has less impact than conventional production,” he said.

He was followed by GLOGALG.A.P. senior technical expert René Capote, who was asked about tools to help communicate what produce suppliers are doing to promote safe, responsible and sustainable agriculture. Capote said that in addition to IFA v6, its flagship standard for F&V, GLOGALG.A.P. offers add-ons including a biodiversity one, launched in April, 2022, “which is a way of bringing more transparency on this key topic at the farm level,” as well as the consumer-facing GGN label.

“We can provide year-round organic production to supermarkets,” he said.

On October 6, the congress continued with a presentation by Ecovalia international manager Evelyne Alcázar, who explained the Biofruitnet project, which is boosting innovation in organic fruit production by enhancing the sharing of knowledge and strengthening networks in Europe.

IPM & the latest in post-harvest innovation

Winding up the congress was a debate on post-harvest innovation as the key to new market access and zero food waste featuring AgroFresh chief technology officer Duncan Aust, Bion commercial director Gino Ansaldi, Citrosol CEO Jorge Bretó and Sanifruit CEO Javier Biel. Aust shared AgroFresh’s latest innovations for helping improve post-harvest across the supply chain, including its recently-launched plant-based coatings VitaFresh Botanicals (with organic certification) and FreshCloud, its digital platform, both to help improve fruit quality and reduce food loss and waste. Bion’s post-harvest management, meanwhile, is helping reduce food waste by means including making it easy to monitor humidity, temperature and invisible gases, like ethylene, and volatile organic compounds (VOCs) that attract pests and pathogens, said Ansaldi. Also helping reduce food waste are Citrosol’s plant-based coatings that extend the shelf life of fruit while avoiding use of plastic and are certified as both organic and suitable for vegan consumption, as Bretó explained. Sanifruit’s Biel set out some of the biotech company’s natural, residue-free post-harvest solutions, such as the new Sani-AG spray which not only extends avocado shelf life but also increases the homogeneity of ripening, something that is very helpful for exporters and growers.