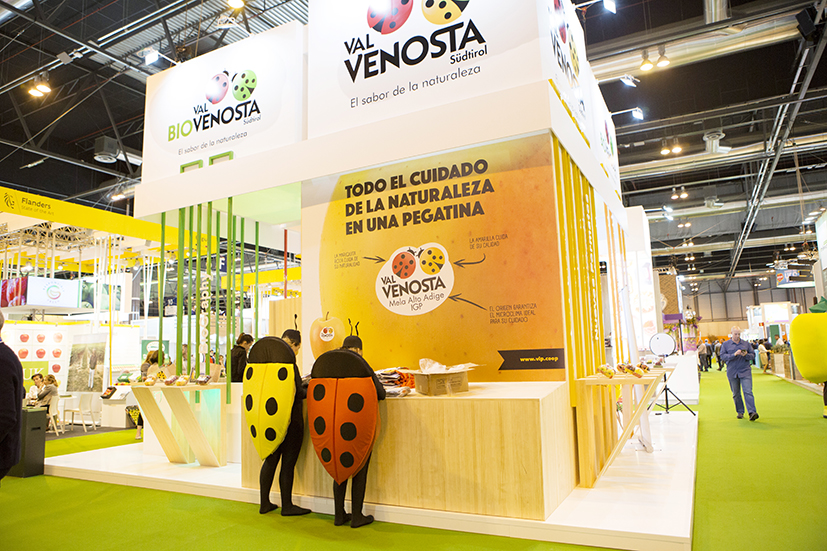 The Fruit Attraction trade fair in Madrid was the stage for the presentation of the new campaign of VI.P, Association of Horticultural Cooperatives of Val Venosta. More than 1,700 farmers are attached to the seven cooperatives that make up this group, located in the Italian Alps. Its flagship products are its PGI Apples Val Venosta marketed in 50 international markets. In addition, thanks to the Bio Val Venosta line, it is among the European leaders in terms of organic apple production.

The firm has more than 5,200 hectares of crops in Valle Venosta, which in the last two seasons suffered bad weather conditions that significantly affected the volume of crops. However, this year, VI.P has recovered its production levels and plans to approach 315,000 tons of high mountain apples.

The quality of this year’s harvest is very good, despite the presence of ‘russeting’ in Golden and Pinova, which will have to be evaluated when the harvest is over. The high temperatures of this summer have allowed a high thermal oscillation between day and night in the valley, favouring a good colouring of the bicolour apples and Golden Delicious, with its characteristic reddish side. The calibres are large, to the taste of the Spanish consumer. And the texture is especially crispy.

The first to reach the market are the traditional varieties: Golden Delicious, Red Delicious and Gala, along with the Kanzi® and Ambrosia ™ clubs. Later, others will arrive, like Envy®. And little by little the rest will be incorporated, until completing the 16 varieties that make up the VI.P catalogue, where classic varieties sit alongside innovative products to satisfy the diverse demand of today’s consumers.

Varietal innovation is a key component of modern agriculture. “We maintain continuous contact with experimental centres around the world and work together with the ‘SK Südtirol’ variety consortium. Currently, we allocate about 3% of our volumes to Club varieties, but we know that it will grow, “said Fabio Zanesco, commercial director of the cooperative association, recalling launches such as Yello®, held last season, to be joined by Natyra® and Bonita, which will hit the market in 2019.

“We are investing in innovation and technology to differentiate ourselves because the market is going through a complex situation. There is a general overproduction, particularly in Poland. And many traditional varieties are being transformed into ‘commodities’, making it difficult to obtain good results. It is a time of change and we must know how to adapt,” said Zanesco.

This varietal innovation also reaches ecological production, another of the association’s growth lines. BIO Val Venosta already occupies 10% of the total area of ​​cultivation of the association and will reach 20% in 2021. In addition, one of the associated cooperatives, JUVAL, is completing the construction of a 100% biological automatic warehouse that will start operating next season.