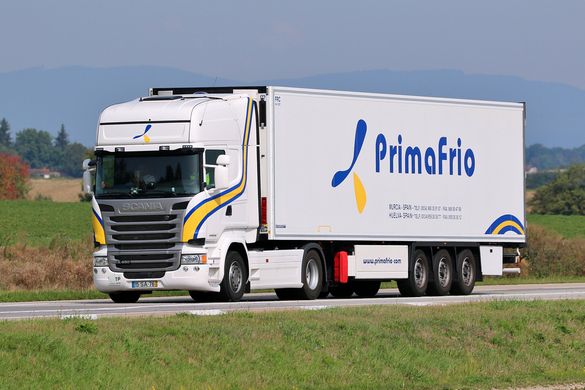 The Primafrio Group was founded over 50 years ago with a very clear vocation: to be a global player in refrigerated land transportation, guaranteeing a comprehensive quality service to its customers. In order to maintain a quality service, Primafrio has five logistics bases distributed throughout the Iberian Peninsula.

The firm’s headquarters, located in Alhama de Murcia, is equipped with the most modern information and communications systems and workshops. It has its own service station with 18 pumps, rest areas for drivers, a restaurant and a cafeteria. The base has a 15,000m2 fully refrigerated logistics warehouse with 106 loading and unloading docks. This allows the development of a groupage service as well as greater control over the temperature of the products passing through the warehouse .

The company reaches 25 European destinations, with daily routes to different countries such as Germany, Denmark and the UK, always ensuring the traceability and correct delivery of all merchandise.

In the last two years, Grupo Primafrio has increased its movements to Central and Eastern Europe as a result of the increase in demand for fruit and vegetable transport and the groupage services.

The newly created company, Primavia, is the result of a partnership between Primafrio and a subsidiary of the French railways (SNCF). The project is aimed at the future need for multimodal transport, using rail as a complement for traditional transportation.

Within this strategy, Primafrio considers that technological innovation combined with continuous training of employees is essential for providing a better service to its customers.

Primafrio maintains a fast and agile capacity to respond to the demands of its customers thanks to its ability to move large volumes of cargo while ensuring a high level of service.

Thanks to its live tracking equipment, the company constantly monitors the position, fuel consumption and driving times of its fleet of vehicles, while also monitoring and controlling at all times the temperature at which the refrigeration equipment of each trailer is programmed, thus guaranteeing the cold chain.

The Primafrio Group is a leader in transporting berries (strawberries, raspberries, blackberries and blueberries), concentrating most of its fleet in Huelva between February and July. This leadership position is evidenced by its transporting an average of over one million kilos of fruit daily, from Huelva to all of Europe.

Moreover, the company has the GDP certification that enables it to distribute medicines for human use, and for the transport of pharmaceutical products and road medicines.

One of the commitments of Grupo Primafrio is to comply with the highest standards of environmental care and protection. For this reason, it has set in motion various actions, such as raising awareness of the environment among its personnel, the activation of an environmental audit to identify areas that may be improved, the calculation of its carbon footprint, and the equipping of Euro VI engines in all of its vehicles. These are systems that reduce atmospheric emissions and consumption