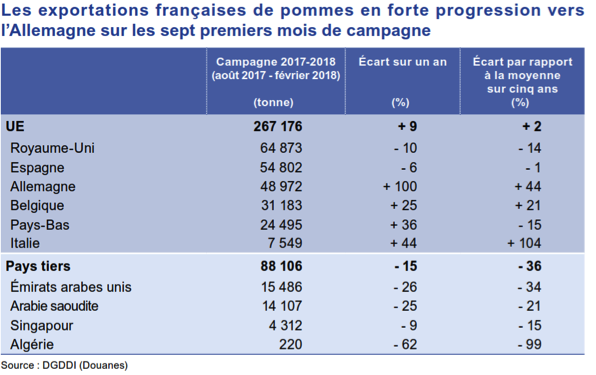 Rising demand and falling imports are favouring higher prices on the domestic market (+ 12% compared to the previous season). Despite the fall in the French harvest in 2017, sales rose by 7%. Spring frosts meant that the French 2017 apple crop fell by 3% to 1.47 million tons – the lowest level since 2012. The decline in production mainly concerns the South-East regions, which were affected by both freezing temperatures and a summer heat wave. Output in the Auvergne-Rhône-Alpes and PACA fell by 12% and 10% respectively. This fall in production mainly concerned Golden varieties (-18%) and two-colour varieties. The freeze also led to losses in Italy, Germany, Belgium and Poland, resulting in European apple stocks, as of 1 March 2018, being 37% lower than at the same time last year and 33% below the five-year average, according to WAPA