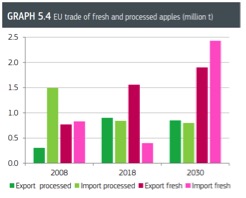 EU apple imports are projected to soar five-fold over the next decade, according to an EU commissioned Agricultural Outlook report. Meanwhile, a reduction in growing area combined with increasing productivity should lead to the stabilisation of production across the continent. The consumption of fresh apples should stabilise, while the consumption of processed apples is likely to drop slightly.

EU-28 apple exports are forecast to soar by as much as 80% in 2018/19, thanks to this campaign’s large crop. Polish and Italian fruit will be at the forefront. In MY 2017/18, exports were 49% lower than in the previous campaign as European apples were priced much higher than normal. While the majority of trade occurs among EU-28 countries, the top non-EU destinations for the bloc’s apples in 2017/18 were Belarus, Egypt and Saudi Arabia. The five largest EU exporters, together accounting for 90% of EU apples exports, were Poland (whose main destinations are Belarus, Kazakhstan, Serbia and Egypt), Italy (to Saudi Arabia, Egypt and Norway), France (to the UAE, Saudi Arabia, Israel and Thailand), Greece (to Egypt and Jordan), and Spain (to Morocco, Mauritania and UAE). Due to the Russian import ban on EU produce, European exporters are increasingly looking to other destinations, particularly India, Eastern Europe, Northern Africa, the Middle East and Brazil. To be successful in these markets requires the right variety mix. Italy, Poland, France, Spain, Belgium and the Czech Republic are already exporting to India, while Italy and France are eligible to export to the US, and Poland has concluded agreements with Vietnam and other Asian countries.

An average of 2.3 million tons of apples are traded between EU Member States each year, with around 400,000-530,000 tons imported from outside the EU. In 2018/19, EU apple imports from outside the bloc are forecast to fall by 7% due to the high domestic supply. In 2017/18, over 70% of European apple imports came from Chile, New Zealand and South Africa, mostly during the European off-season. The main apple importing countries were the UK and the Netherlands, together accounting for 58% of volumes, although most imports to the Netherlands are subsequently exported.