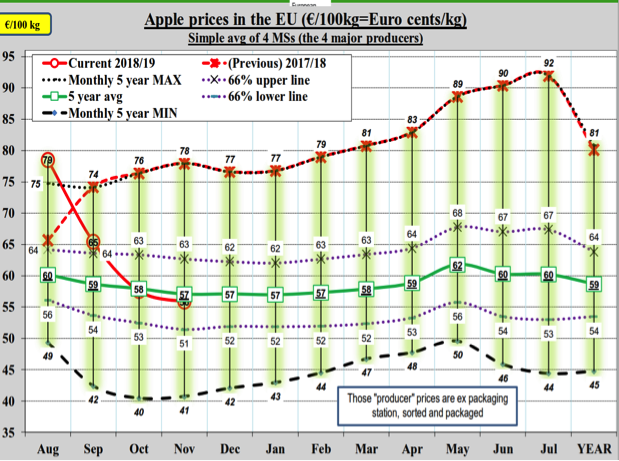 The 2018/19 apple campaign began on 1st August with a return to normal production. This should lead to a significant drop in prices from last year. Nevertheless, average EU apple prices so far during this campaign have been above the five-year average (+31% in August and +11% in September) but dropped just below average in October (-1%). However, there are major divergences at the country level, with French apples costing over six times more than Polish apples in September. In October, while German apples were 10% and French apples were 11% above the five-year average, Italian apples were 6% and Polish apples were 48% below the average. Poland’s large crop is having difficulties finding markets as demand is not yet there for certain varieties, especially for processing.

Export opportunities seem to be on the rise, especially in China which suffered a severe frost that could lead to a significant drop in the world’s supply and allow EU fruits to find markets in Asia and elsewhere. Also, Southern Hemisphere production is down 4% from last year.