China’s 2020/21 pear crop is projected to fall almost 8% to 16 million tons, as frost hit the country’s main producing region, Hebei. Chinese consumers prefer crunchy Asian pears over western pear varieties. The low volumes of imported western pears from the EU and South Africa are mostly consumed by children and older people. The MY 2020/21 pear import forecast is 11,000 tons, according to FAS China data.

The planted area of pears is forecast at 940,000 hectares in MY 2020/21. Pear acreage has declined due to lower market returns and weak domestic demand, especially for traditional pear varieties such as Ya Pear, Snow Pear, and even Huangguan Pear, according to industry sources. However, pear acreage has expanded in some provinces for certain pear varieties, such as Su Pear, Fragrant Pear, Jade Pear, Autumn Moon Pear, Yulu Pear that are favoured by domestic consumers. 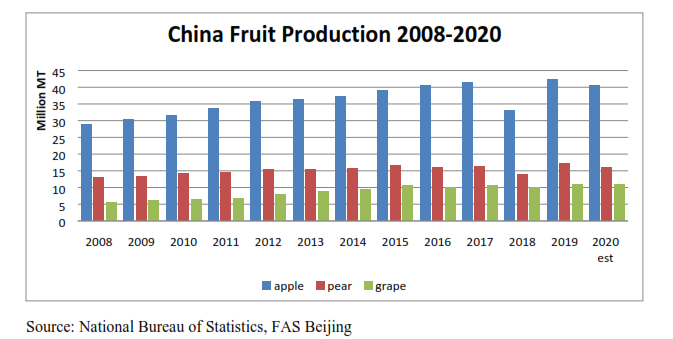