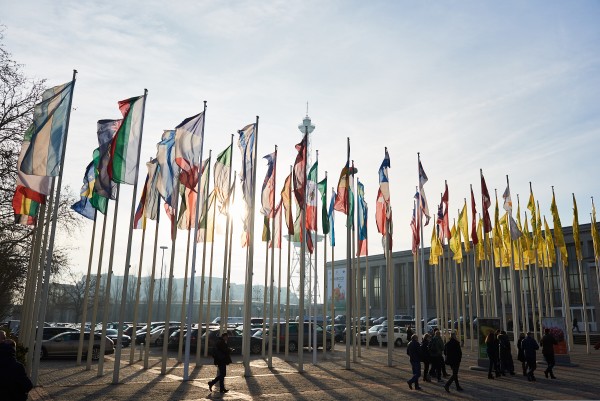 Exhibitors from 90 countries and trade visitors from 130 countries: FRUIT LOGISTICA is becoming increasingly international. Armenia is celebrating its premier at the exhibition, while Serbia and Albania have more than doubled their exhibition space. Kosovo is exhibiting with its own stand for the first time. New trading relationships, customs tariffs and basic conditions are a huge topic at the trade fair, just as much as Brexit.

The fact that countries in Eastern Europe have increased their presence is also due to sanctions against Russia and Iran. Sales markets in the West are therefore gaining in importance. Armenia is at FRUIT LOGISTICA for the first time with Spayka, a producer of fresh produce and the largest logistics firm in the Caucasus. At the foot of Mount Ararat, Spayka grows tomatoes and cucumbers in a large complex of greenhouses that extends over 55 hectares. Armenia currently exports almost exclusively to Gulf and CIS states. “Currently only five percent of our exports go to the EU,” says Karen Baghdasaryan, vice president of Spayka, “We see huge potential for organic produce from the greenhouses and for processed products, such as juices and marinades.”

Brexit and its possible consequences are a key topic at the international exhibition. The UK is an important market for many EU countries. 84 percent of fruit consumed by the UK is imported as well as virtually half of all vegetables. Spain and the Netherlands are particularly important for vegetable imports. They supply two thirds of the demand to the United Kingdom. According to the European Statistics Handbook 2019, the UK imports fresh vegetables with a total value of over 4.5 billion euros, and vegetables valued at over 2.8 billion euros. By contrast, fruit exports total 305 million euros. This means that the UK is investing twenty times its own income in fresh fruit. Whatever comes out of Brexit, one thing is clear: it will have an enormous impact on logistics for fresh produce within Europe, the refrigeration industry and on European ports.

How important is the UK for your company?

Very important: for 20 years, we have been exclusively supplying the UK from Belgium and Holland. Every day, we dispatch around 150 to 200 trailers to England, each carrying around 26 pallets.

What impact will Brexit have on your business?

I think there will be a deal, but that could take months. Initially, our export volume will probably reduce by 30 to 40 percent. But a hard Brexit would also mean less competition. At closed borders, registration would be required every time. There are not enough customs officers. Lead times would be around two days longer. That would be difficult for fresh produce, of course.

How are you preparing for Brexit?

We set up an English firm last month and changed all our IT systems. 80 of our trailers are now positioned in the UK, where 50 percent of our staff already work.