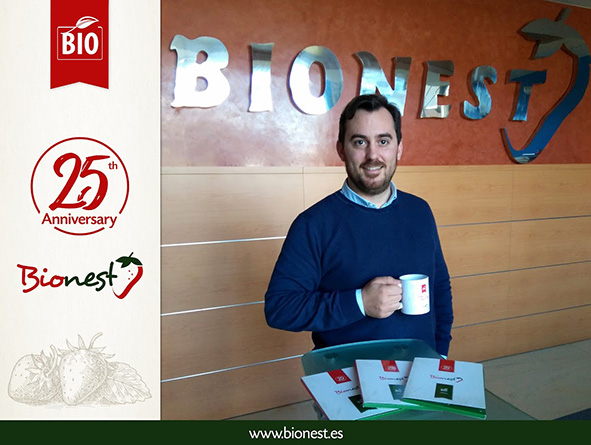 The leading Spanish producer of organic berries, Bionest, celebrates 25 years in the market by conducting for the first time a varietal selection of berries exclusively focused on organic production. The selection is especially focused on the flavour, rusticity and nutritional value of the varieties.

“We invest in research and development to continue offering the sector’s best organic varieties to the most demanding customers. Excellent taste and shelf life are our main objectives. We have a new testing field that allows us to select the varieties that best suit the needs of our customers, as well as new controlled atmosphere and ozone systems.”

The company’s production exceeds 7,500 tons, of which 2,000 tons are strawberries, 1,500 tons are raspberries and 2,000 tons are blueberries. Bionest’s strawberry season is currently in full-swing, having opted for varieties with longer shelf life and better flavour. The raspberry harvest is also about to begin, with production expected to increase by 15% on last year’s level. Despite the slight delay, blueberry output will also be higher, thanks to the introduction of new varieties to boost consumption. Meanwhile, Bionest has multiplied its packaging formats, which range in size from 70 g to 500 g. The company serves supermarkets in the United Kingdom, Germany, Switzerland, France, Belgium and the Netherlands and is in its third year working with clients in the Middle East and Southeast Asia, where it intends to consolidate its market position.

The Soltero Pardo family has worked in agriculture for more than two decades, having decided in 1992 to produce organic berries and found Bionest. After 25 years of commercial activity, the company was renamed Berrynest SAT H-0023, and is today the leading Spanish producer of organic berries in the European market. All of the firm’s farms are located in the province of Huelva, Andalusia, Spain.