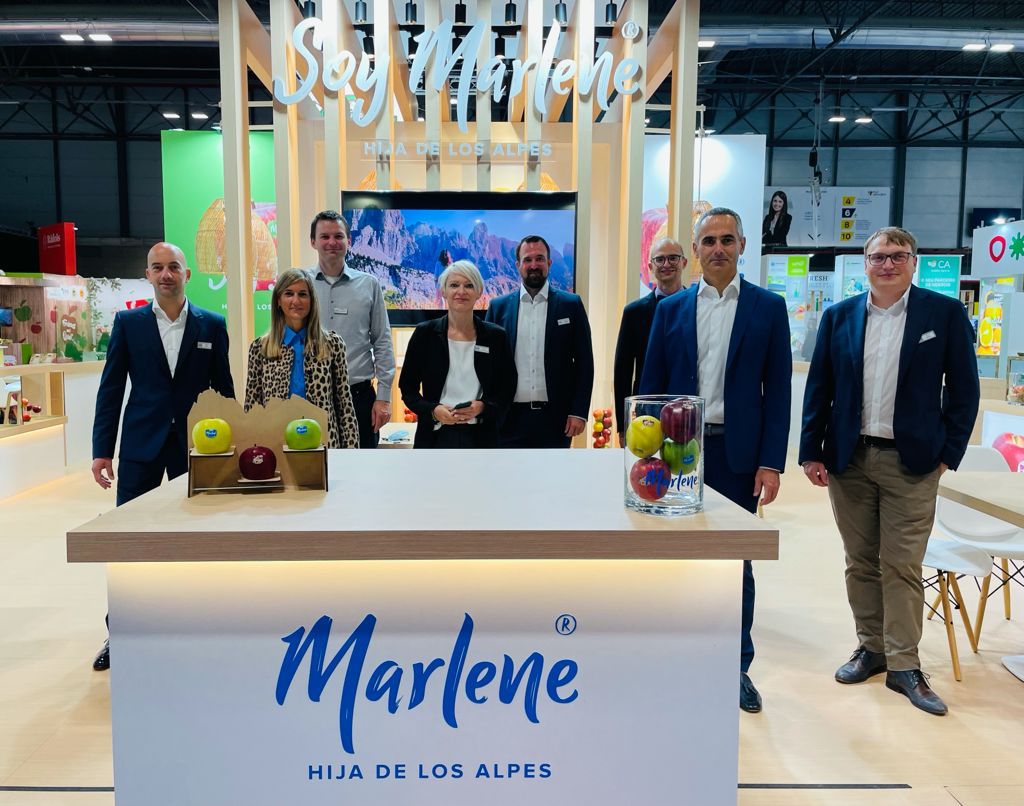 Early season results of the South Tyrolean Consortium at the Madrid trade show. New Marlene® campaign dedicated to the 4 seasons also presented to the Spanish public.

(Bolzano, 08 October 2021). There were plenty of positives to be drawn from the VOG Consortium’s participation at Fruit Attraction, the important international fruit and vegetable industry trade show held in Madrid from 5 to 7 October. After the exclusively digital version of the show held last year as a result of the pandemic, this year the pavilions of IFEMA once again welcomed exhibitors and visitors in person in what was an important sign of recovery for the entire industry.

“We were really happy to be back in Madrid for Fruit Attraction, a key trade show for us because it enables us to present all of our latest products and solutions for the new sales season to lots of international buyers and the industry press”, explains Walter Pardatscher, CEO of VOG. “The Spanish market is very important for us, the Marlene® brand is very successful and popular with consumers in this country, in fact it is the best-known brand in the entire fruit and vegetable sector”.

Fruit Attraction was an opportunity for the VOG Consortium to draw its first conclusions on the start of the new apple season: “We are right in the middle of the harvest at the moment and after finishing with the Gala, which opened the season in mid-August, we are now proceeding with other varieties like Golden Delicious, Stark, Granny Smith and Kanzi®”, explains Klaus Hölzl, VOG sales manager. “The overall quality is certainly very good. As for the start of the campaign, feedback has been very positive and distribution has been very dynamic from the off in all of the main markets. Sales are proceeding smoothly and all the signs point towards a positive first part of the season”.

One of the new developments that the Consortium illustrated to visitors at its stand was the new Marlene® communication campaign on the theme of the 4 seasons, with a new video dedicated to the Daughter of the Alps apple. First presented at the Venice Biennale, the commercial was first aired on 22 September and is broadcast in Spain, Italy, Malta and Cyprus, both on TV and at the cinema. The 4 seasons theme is also the focus of an intense media campaign involving the Out Of Home, Adv and Digital channels.

“The new commercial has also been well received here in Spain, a very important market for our apples”, comments Hannes Tauber, marketing manager of the VOG Consortium. “The commercial expresses the Marlene® universe through sounds and images recorded over an entire year, and is creatively produced with an innovative cinematic style. “It shows how the intensity of the seasons in our apple orchards create the ideal climatic conditions for bringing out the best of all our varieties of blue sticker apples.”

In Madrid the VOG Consortium also illustrated the characteristics of the three new apples presented back in January: Red Pop®, Giga® and Cosmic Crisp®.

Planned for the second part of the season, these premium varieties stand out for their highly distinctive qualities.“The first tests carried out last season provided us with some very interesting feedback: the reaction to the flavour of these new apples was very positive in all channels – concludes Walter Pardatscher – We are very optimistic for next season which will see the apples produced in greater volumes”.