The producers of the new variety of early orange, M7, have gone in with all guns blazing to launch it on the market. Their campaign is based around a Hollywood style […]
Tue 08/11/2016 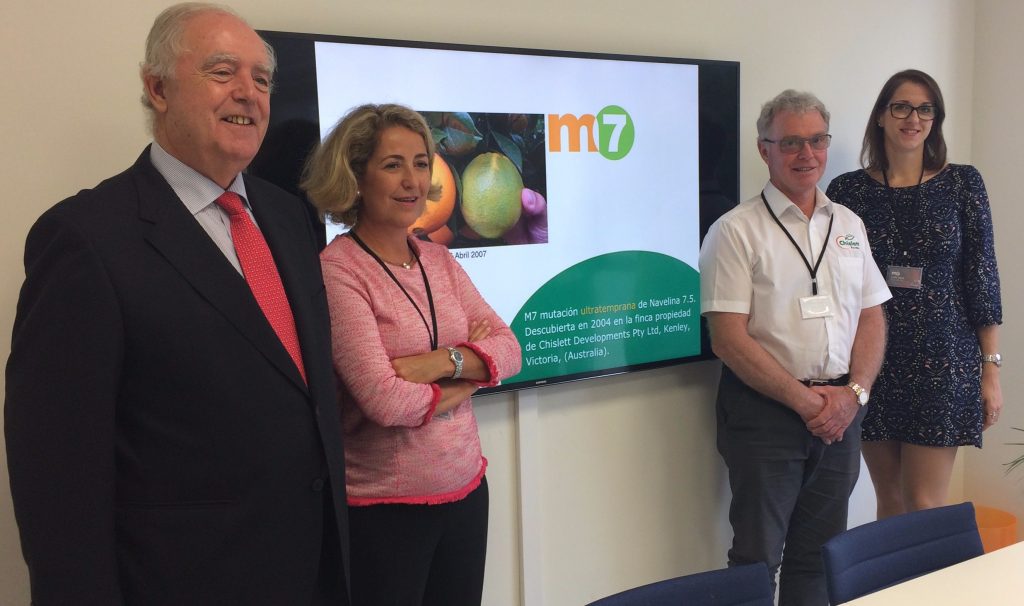 The producers of the new variety of early orange, M7, have gone in with all guns blazing to launch it on the market.

Their campaign is based around a Hollywood style production trailer directed at purchasers and retail chains.

In addition there will be a series of events at greengrocers and supermarkets to publicise this variety through tastings and explain its characteristics.

The owner of the license in Spain is GCM (grouping the Giner, Cañamas and Martinavarro citrus companies), which has granted sublicenses to several hundred farmers in Valencia, Murcia and Andalusia and to the Valencia-based Protected Plant Variety Company.

These orange plantations are in the growth phase and 4 million kg of these oranges will be produced this year of which the first began to hit the market in mid-October.

M7 breeder Greg Chislett, from Kenly, Australia, was in Valencia last month to talk about this new orange which arose by spontaneous mutation in a Navelina 7.5 tree and is easily distinguishable, not only because of its rounder, more intense orange fruit but also its very distinctive foliage with a different leaf shape. The M7 is an early Navel orange which matures from mid-October in the Northern Hemisphere, approximately 3 weeks earlier than any other navel.

It is also far firmer and lasts on the tree for a minimum of 4 months as well as maintaining its condition and firmness.

It has consistently had a higher Brix level over the seven seasons it has been monitored, with its acid levels remaining over 0.75 for 4 months and no signs of creasing or of albedo breakdown.

In tastings, its taste, colour, shape and rind quality have been praised.

Other advantages of this variety are that the tree is fast growing and produces 15 tons/ha from 3.5 year old trees (1,000 trees/ha) and the orange itself is very easy to protect.

The variety was officially registered (patented), and formally recognised by the European Plant Variety Office on July 29, 2013.

The same process was followed in Australia, California, Chile, South Africa and New Zealand, countries that, along with Spain, produce an exclusive and authorised limited number of hectares.

In Spain, only 2,000 ha are permitted, and it is the only country in Europe to be licensed to grow it.

Category: Uncategorized
Tags: Cañamas and Martinavarro citrícolas, Citrus, CVVP, early Navel oranges, early ripening oranges, GCM, Giner, Greg Chislett, KW, M7, new citrus varieties, Protected Plant Variety Company, Valencia
We use cookies on our website to give you the most relevant experience by remembering your preferences and repeat visits. By clicking “Accept All”, you consent to the use of ALL the cookies. However, you may visit "Cookie Settings" to provide a controlled consent.
Cookie SettingsAccept All
Manage consent