With more foreign visitors this year – a total of 42,000 from 141 countries – organisers said it was the “most international, gastronomic and innovative” edition of the fair. Mercabarna […]
Fri 13/06/2014 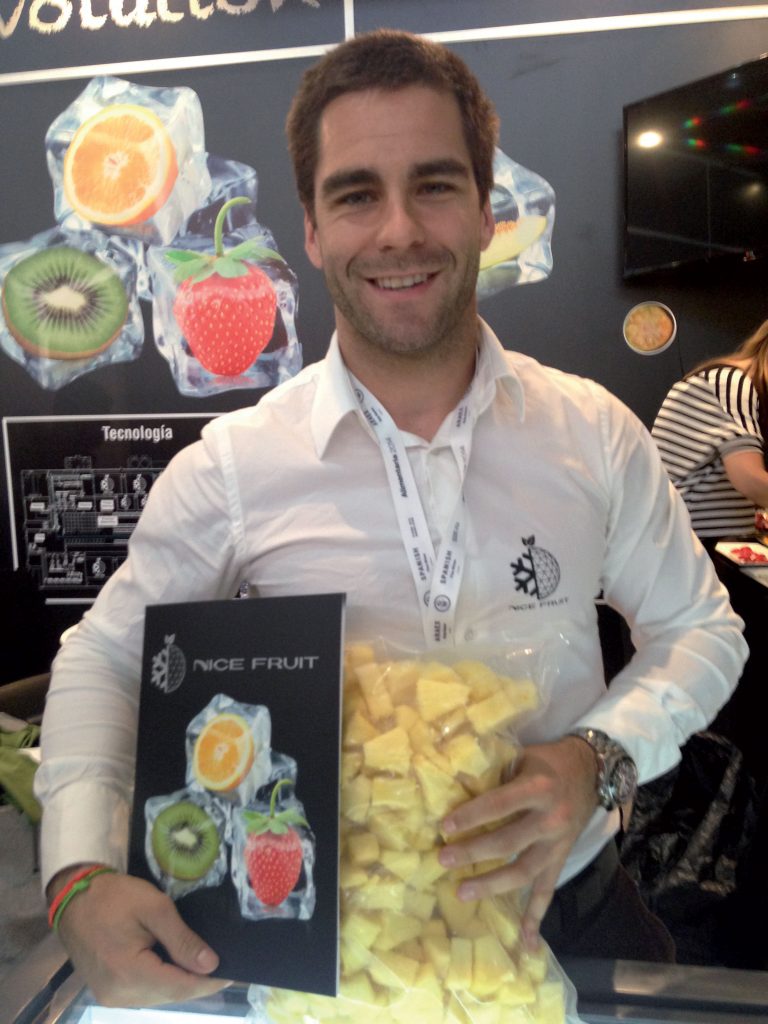 With more foreign visitors this year – a total of 42,000 from 141 countries – organisers said it was the “most international, gastronomic and innovative” edition of the fair.

Mercabarna optimizing logistics
Among the exhibitors was Mercabarna, where director of strategy and marketing Pablo Vilanova Montagut told us about this Mediterranean food hub’s aim to streamline transport for mixed cargoes.
A handy pantry of fresh produce from which European buyers can mix and match to meet their needs – that’s one vision of itself Mercabarna is now promoting. And apart from making it easier for such traders to come to the market and take their shopping home with them, Barcelona’s wholesale food market is studying how to help the more than 200 firms specializing in fruit and vegetables there deliver orders of all sizes to far-flung buyers and to do it cheaper and faster.

Nice Fruit “revolution” in frozen fruit
Spanish company Nice Fruit won various innovation prizes at Alimentaria its patented “air-based” technology for freezing fruit. The result is a product that once thawed is not only equal to fresh fruit in taste and texture but has many advantages over it. Nice Fruit has been operating for just over eight months and already sells all of its 30 ton daily production from its plant in Castellbisbal (Barcelona) to the food service sector. Three more plants of the same capacity will be built this year: one in the Philippines, mainly for mango, another in Costa Rica, for pineapple, and the third in Colombia, for mango, avocado and strawberry. By the end of the year the company will produce 90 tons/day and that still won’t meet demand.

Category: Uncategorized
Tags: Alimentaria, organic produce
We use cookies on our website to give you the most relevant experience by remembering your preferences and repeat visits. By clicking “Accept All”, you consent to the use of ALL the cookies. However, you may visit "Cookie Settings" to provide a controlled consent.
Cookie SettingsAccept All
Manage consent