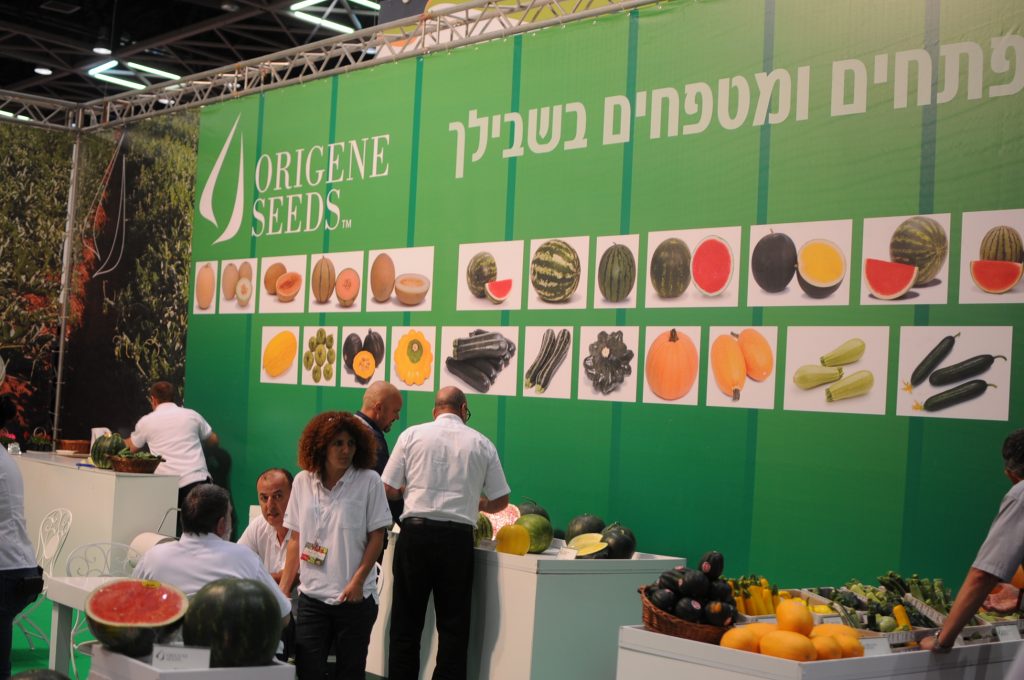 The World Cup and a resounding success for international

“Fresh Agro-Mashov” which takes place at the meeting place of three continents (Asia, Africa and Europe) has become, with the years, one of the most important exhibitions in the world. Among the tens of thousands of visitors to the 24th Fresh Agro-Mashov Exhibition that took place this week in Tel-Aviv, visitors from Africa, Asia and Europe were prominent.
“Contrary to what you might expect, the Fresh Agro-Mashov Exhibition manages to overcome politics and proof of this is the fact that the largest delegation was the Palestinian delegation” according to Haim Allouche, the founder of the exhibition.
“This exhibition is a bridge to the Arab world and business is done here between businessmen from countries that have no diplomatic relations with each other.”

What is the secret of the phenomenal success of the agricultural World Cup in Tel-Aviv?

“First of all – Israeli agriculture has a worldwide reputation as a leader in innovation. Drip irrigation and inventions that changed the world of agriculture have come from here.
the 2nd secret  is  The location of the exhibition and the fact that Israel’s population came here from a hundred countries around the world.In this exhibition the Russian, the Argentinian, the Frenchman and the Indian all feel at home”.

Tens of thousands of visitors to the exhibition could not ignore the farmer  Johnny Georges from Florida who was brought especially to the exhibition in central Tel Aviv by the ILS-Global company of Germany to celebrate the launch in the Middle East of Georges’ patent Tree-T-Pee which reduces the amount of water fruit trees need and also protects the trees. The successful patent was publicized when the US “Cowboy” introduced his patent in a popular TV show, “Shark Tank” , which hosts entrepreneurs and inventors.

“The terrain and climate are very similar in Florida and Israel and the people who came to the exhibition are really looking for solutions that will save on irrigation” says Georges. “However, more than the weather, I was surprised that the Israeli farmers, as well as their colleagues in the Palestinian Authority, Greece, Turkey and Jordan who came to visit the exhibition are very similar to us, the farmers of the United States. The subjects discussed with us by the farmers included pesticides versus organic thinking, the price received by the farmer for his goods and the problems of transporting fresh produce to the chains’ food stores tens of thousands of miles away from the orchard or field. The problems of agriculture, as well as the successes, are global and every farmer today is in fact an international player in a huge field”.

In the second exhibition hall of the Fresh Agro-Mashov Exhibition, the farmers, from seed developers to growers and marketing people from all over the world could meet Mr. Nestor Joaquin Ortega, the Minister of Agriculture of the Misiones Region in Argentina. Next to him, taking part in international meetings was the Chief Agronomist of the region’s Ministry of Agriculture, the chairman of the Argentina – Israel Chamber of Commerce and other businessmen who came in order to meet and learn about new agricultural technology that may help small and medium-sized farmers to enhance and optimize agriculture in their region. In his remarks to the media, Mr. Joaquin praised the power and strength of Israeli agriculture which is promoting quality solutions for growers.

One of the companies in the forefront of Israeli progress, which displayed in a huge booth in the center of the exhibition, is Zeraim Gedera, part of the global Syngenta Group, a leading global agro-chemical group.  Inbal Avraham, a senior company official, told us that the company decided to come to the Fresh Agro-Mashov exhibition as they do each year in order to make contact with buyers from different parts of the country and to let them know about the best products they have.

Avraham spoke mainly about the exhibition as a lever to strengthen ties with the growers in a year in which the company has decided to concentrate on introducing the company’s new seeds of quality tomato species to the growers in the expectation that we will see them in a bowl of salad in the coming year all over the world.
Exports, especially the sharp increase in the quantities of fresh produce exported to

Russia, received center place at the opening session of the exhibition in the presence of senior marketing people in Russia, buyers from food chains and Eduard Vertianov, the  Head of Trade & Economic Mission of the Russian Embassy in Israel.

Vladimir Sachs of the Israeli- Russian “Yonatan Farm”  (chief sponsors of the conference area) said that this was the sixth or seventh time they had participated in the exhibition and that they exhibit in Israel as well as in their regular pavilions in the major exhibitions of fresh produce marketing in Berlin and Moscow. “We want to meet and refine our message to all the growers and suppliers with whom we work on an annual basis”.

The annual Fresh Agro-Mashov Exhibition is a focal point of pilgrimage for all Israeli agriculture and is sponsored by the Israeli Ministries of Agriculture and Economy. Within the framework of the exhibition, the local Ministry of Agriculture set up a huge pavilion to allow farmers and entrepreneurs to meet personally with the senior ministry officials and of course the Minister of Agriculture came to get an impression of the achievements of Israeli agriculture and of the booths of visiting exhibitors from abroad. Another distinguished guest was the mayor of the host city of Tel Aviv-Jaffa who honored the visitors from all over the world with his visit to the Agro-Mashov Exhibition.

The power of the exhibition comes from the dozens of delegations that visit from all over the world. The Palestinian delegation was the largest delegation this year and numbered about 500 guests. “Agriculture is a bridge between peoples,” said Samir Muadi, the Agriculture Coordinator of Judea and Samaria. “The Palestinian farmer can now market to Europe and Russia through his Israeli colleagues. And they in turn can use their Palestinian platforms for marketing fresh produce to new markets in the Gulf States, which are blocked to direct marketing by Israeli growers. The Dubai customer can eat the strawberries, dates and pears of Israeli farmers and the reciprocal marketing possibilities between farmers in the Palestinian Authority and in Israel can deepen and intensify as demand grows in the East and in Russia!”

The display booths presented to the public watermelons, agricultural insurance companies, Sabras for filling, gourmet fruit from the Golan Heights alongside banana growers, farm equipment and representatives of the Israeli retail chains who came to talk directly to the growers in order to reduce the profit margins prevailing in the industry. Dozens of booths of local and international exhibitors gave expression to the power, the strength and the relevance of current farming. Dr. Nimrod Israeli, the founder and CEO of “Bio-Feed”, which exhibited some of the most advanced pest control solutions in the world, held meetings with representatives of the major chains (Shufer-Sal, Shikma Marketing – Rami Levi, and the Victory chain) who visited the exhibition, as well as with representatives of the large packing houses, opinion leaders in the social networks, growers, businessmen and senior officials from various government ministries. Off the record, Dr. Israeli told us about dozens of transactions previously finalized and about the feeling of huge success with the advance of the company and of the war in Israel and in the Mediterranean basin against the damage caused by the Mediterranean Fruit Fly in which the company specializes.

Towards the end of the exhibition, the Israeli Mashov Group signed an agreement of intent and cooperation with representatives of the Chinese organization IGEA – International Green Economy Association which sent a delegation of about 17 distinguished business owners to visit the exhibition. This a breakthrough agreement for the Israeli group, as it will advance the interests of the Chinese companies in Israel while at the same time presenting many possibilities for Israeli companies to introduce and establish relationships with Chinese companies seeking advanced technology in agriculture and clean-tech. Mr. Joseph Zhn, the vice secretary- general, in his greetings on the occasion, stressed how important agricultural progress is to the Chinese and the importance they see of cooperation with Israel, as leaders in the field.

The exhibition marking the quarter-century of Fresh Agro-Mashov will take place in a year from now in the Tel-Aviv Conference Center. on 23rd-24th June and will mark 25 years of success. The personal success of the organizers, led by Mr. Haim Allouche the founder and the resounding success of Israeli agriculture that has known how to change and make itself central to the fresh produce sector all over the world.