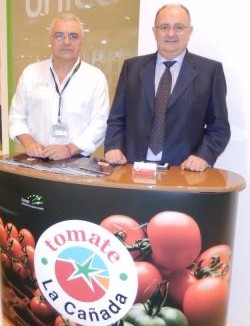 For this campaign, the La Cañada tomato PGI regulatory board has set its sights on increasing its export volume without reducing quality or taste.

The Protected Geographical Indication’s (PGI’s) goal is to introduce new companies and extend the cultivation area.

The La Cañada Tomato PGI kicked off the new fruit and vegetable campaign at the Fruit Attraction fair, held October 5-7 in Madrid.

Regulatory board president Francisco López Martínez stressed the quality of these PGI tomatoes, describing it as “unbeatable.”

“It is the job of the companies that make up the regulatory board to let the world know about it,” he said.

López Martínez said one of the PGI’s aims is to continue growing, “by introducing new companies in the zone in which we already working.”

“This campaign is going to be very important in all senses for the PGI and there is no doubt that we are going to work very hard to meet the targets for volume growth, area under cultivation and companies on the regulatory board,” he said.