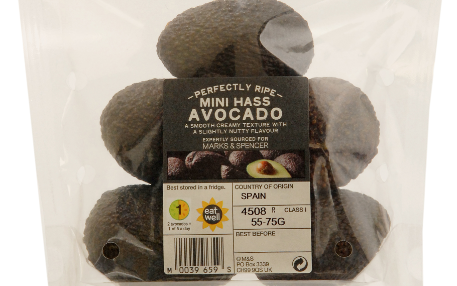 Amid a boom in demand for the baby version, Spain is calling for a change to the trade standard for avocados.

It says many Spanish companies are now trading in mini avocados – aka babycados – due to demand for them in other markets. However, Spain has had problems applying the United Nations Economic Commission for Europe (UNECE) standard for avocados to them. That’s because while these kinds of avocados are of good quality, they don’t comply with the standard’s sizing provisions, it said.

In a submission dated March 10, a Spanish delegation proposes that the avocado standard be amended so that its size requirements do not apply to miniature produce. It made the submission in the lead up to the 64th session of the Specialized Section on Standardization of Fresh Fruit and Vegetables of the UNECE Steering Committee on Trade Capacity and Standards, being held in Geneva April 18-21.

UK premium retailer Marks and Spencer announced in January that it is now stocking mini Hass avocados, half the size of the regular avocado. Grown near Malaga, Spain, they will be on shelves from January-April and sold in packs of five for £2. M&S says the flavour is more concentrated in the smaller avocados, which are “rich, sweet and creamy.” It also reported that last year it sold more than 11.5 million units of avocados, up 18% on 2014.

Fellow UK retailer Waitrose also offers baby avocados. According to its website, the origins for the product are the US, Tanzania, Spain (incl. the Canary & Balearic Is.), South Africa, Peru, Morocco, Kenya, Israel, Colombia, Chile and Brazil.