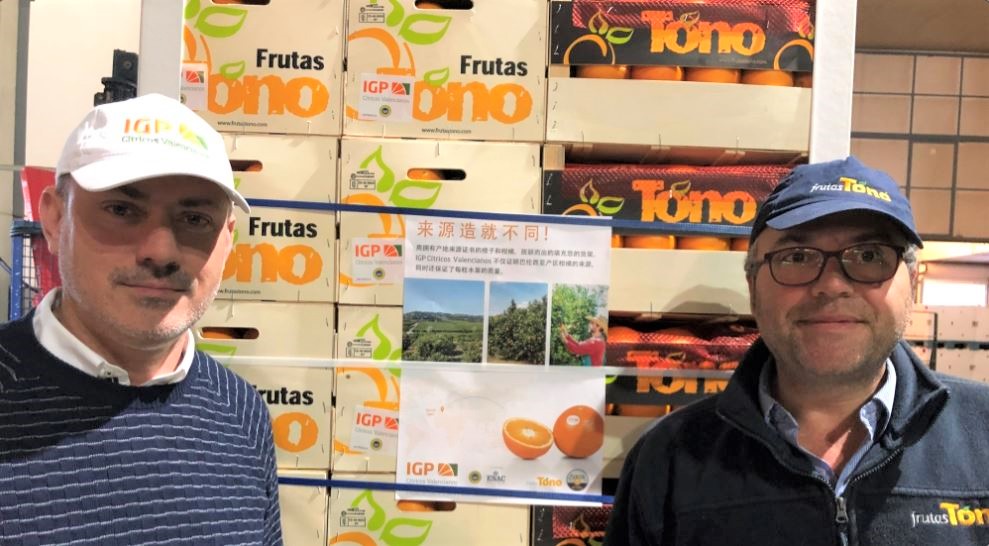 The Regulating Council Protected Geographical Indication “Citricos Valencianos” continues with its expansion to new export markets, and in this campaign they are focused on the Chinese market. For this reason, the first oranges of the Lanelate, Nável Powell and Nável Chislett varieties certified with the Citricos Valencianos label will soon be arriving in China at the hands of Valencian company Frutas Tono.

According to Juan Bautista Juan, export manager of Frutas Tono:

“Since 2015 our company has exported its citrus fruits to China as a bet to a growing market that values ​​the quality of citrus fruits, which is why Frutas Tono has been made a gap between Chinese consumers and has decided to bet on the IGP certification, on the one hand to distinguish the excellence of Valencian citrus from other origins such as Egypt, which is year after year increasing its shipments to China and we must recognize that it is a country more mature in their exports and they are doing things better than before, and also, to promote in destinations that a few years ago seemed an adventure. Valencia Citrus fruits are in need of promotional campaigns to raise the spirits of a sector that is going through one of its most complicated campaigns.”

“Our firm sends oranges with PGI to the main port of entry of Spanish citrus fruits, which is the port of Shanghai, shipments are of the second season varieties Lanelate, Nável Powell and Nável Chislett. The trademarks in China that Frutas Tono uses as a vehicle to champion Valencian excellence are Tono and Benton. The volumes vary depending on the situation of the Chinese market and the sizes of the fruit that this year are lower in general, although in the beginning of the Asian campaign the shipments are being lower in general to previous campaigns, it is hoped that the situation takes a turn and the arrivals of April and May (we must take into account that between the preparation of shipments and downloads in China spend about 40 days), are more beneficial to the interests of the Valencian citrus sector breaking the current apathy of the market.”

Long-awaited goal fulfilled for the IGP

For his part, the managing director of IGP

“Cítricos Valencianos”, José Enrique Sanz, has indicated that “for us it is a great satisfaction that our seal reaches such an important market as China, where we begin to value the quality of our products. Since 2014 we have seen interest by the Chinese market in Spanish citrus fruits in different international fairs, but in the last two years we have noticed that there is an increasing interest in distinguishing the Valencian origin in the labeling, and the way to certify said origin and quality is through the certification of the Valencia Citrus IGP.”