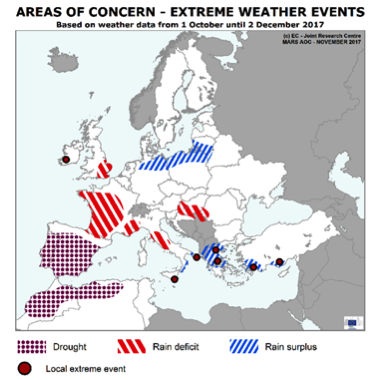 Weather conditions have largely been favourable in most of France and the main production regions of the UK, but challenging in several other parts of Europe.

Sustained heavy rainfall in northern Germany, northern Poland and Lithuania has delayed field operations. Rapeseed is worst affected as its optimal sowing window has finished and a reduction in the planted area is expected. In contrast, Spain, Portugal and northern Africa has seen very dry conditions continue since October, with more rain needed to ensure good germination before the closing of the optimal sowing window in mid-December.

Meanwhile, in Turkey, good soil moisture in the west of the country has meant sowing conditions have generally been favourable. A cold snap in November, however, may have caused damage to young winter barley stands in central regions.

Low rainfall in southern European Russia has aided sowing, but the very dry topsoil delayed early crop development until mid-October. In contrast, in northern and eastern regions of European Russia, the sowing campaign was delayed due to heavy late summer rains.

Ukraine’s season has got off to a good start with wet conditions aiding sowing, crop emergence and early establishment.