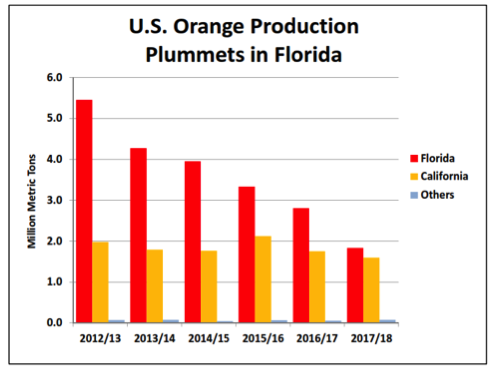 US orange production is estimated to fall 24% to 3.5 million tons due to unfavourable weather and citrus greening disease continuing to cause fruit to drop in Florida before it is ripe.  This has led to lower volumes of exports, consumption, and fruit for processing.

Production in the EU is estimated down 5% to 6.4 million tons, due to lower production area and drought conditions. Imports (which are more than triple exports) are up 10% while oranges for processing and fresh consumption are both down due to lower supplies.

Egypt’s production is estimated to hit a record 3.2 million tons, up 6% from last year due to higher area. Exports are up 5% to a record 1.6 million tons. Egypt accounts for one-third of global orange exports.

South Africa’s production is expected to rise 8% to 1.5 million tons. Exports are forecast to reach a record 1.2 million tons and account for 25% of global trade. The EU remains the top market accounting for over 40% of South African orange exports.

Production in Turkey is forecast at a record 1.9 million tons due to favourable weather. Exports are also at a record high thanks to greater available supplies and high demand in Iraq and Russia.

China’s production is projected up 300,000 tons to 7.3 million as a result of clement weather. Consumption is up due to higher domestic supplies and robust import demand for high-quality and counter-seasonal fruit.  South Africa and Egypt are the top two suppliers, accounting for 60% of imports.