INTERPOMA CHINA 2018 International Congress & Exhibition unveiled on June 28, 2018 at Weihai International Exhibition & Conference Center in Shandong Province, is the second edition of the show after […]
Mon 02/07/2018 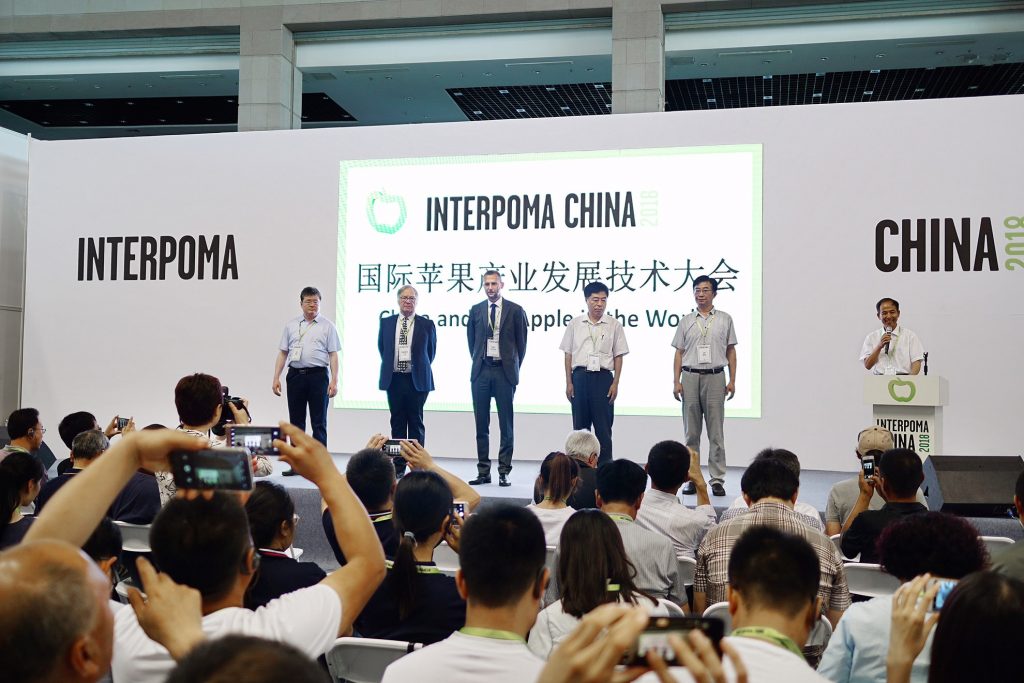 INTERPOMA CHINA 2018 International Congress & Exhibition unveiled on June 28, 2018 at Weihai International Exhibition & Conference Center in Shandong Province, is the second edition of the show after its debut in China one year ago. With the support from the parent Italian Interpoma Trade Show, this exhibition focuses on the  cultivation, storage, and market of the apple industry. “China and the apple in the world”, the international congress of Interpoma China, is also held concurrently and includes several keynote speeches and technical seminars – delivering professional and technical apple industry information and promoting the modernization of apple growing in China. In addition, tours to apple orchards are organized for attendees to witness the prosperous future of China’s apple industry first hand.

The subject of this year’s event is “green development”. According to Professor Yuan Yongbing’s speech during the opening ceremony, this event promotes the introduction of overseas talents and development of China’s local apple industry. Moreover, through an event such as INTERPOMA CHINA 2018, Weihai aims to become an international hub of talent, technology, information and recourses for the apple industry.

Mr. Wang Deguang of the Weihai Municipal Agriculture Bureau emphasized the importance of Weihai as a part of China’s apple growing industry. Weihai has over 100 years of apple production history and has grown into China’s primary apple producing area—the city alone has 47,000 ha of land dedicated to apple farming. In recent years, Weihai has been studying advanced, international apple growing techniques. In doing so, Weihai has taken the lead in adapting the latest modes of apple cultivation. Mr. Wang also expressed that Weihai has gradually been transitioning its traditional orchards into modern orchards, which has led to the rapid development of the city’s apple industry. The area of modern orchards has already reached 20,000 ha – that is about half of the total apple planting area in the city. Rightly so, Weihai has become the largest modern apple planting area in China.

Mr. Thomas Mur, Managing Director of Fiera Bolzano Exhibition Center, made clear that China is one of the leading apple-growing countries in the world. And as such, it is right to share Interpoma’s 20 years of success with China. The mission of INTERPOMA CHINA, according to Mr. Thomas Mur, is “to create a unique platform for sharing know-how in one of the strongest agricultural markets worldwide, to strengthen the connections between China and Italy and in this way contribute to the development of the apple industry in Shandong Province and beyond.”

There are total 30 exhibitors at the show including several machinery suppliers & nurseries from Italy, Belgium and Netherlands. Chinese apple industry giants such as Haisheng, China National Tree Seed Corporation, Huasheng Nursery, and Salver all exhibit at the show as well as Weihai’s leading modern apple producers like Ying Ju Yuan and Xin Yuan.

Interpoma China Congress followed the opening ceremony where well-known professionals from around the world delivered valued speeches. This year’s conference was jointly organized by Weihai Municipal Agriculture Bureau, Qingdao Agriculture University, and Weihai Apple Industry Association. The focus quickly centered on the rising demand for orchard machinery in China’s apple producing areas—an opportunity for the adoption of new equipment and tools in Chinese orchards. The seminars are divided into three sections. On Thursday 28 June, the subjects of two sections rallied around “green control and precise fertilization” and “apple post-harvest handling and market situation”. On Friday 29 June, the morning workshop will focus on control techniques for chemical fertilizers, apple pest management, and seedling production technology.

Category: Uncategorized
Tag: Interpoma; China; 2018
We use cookies on our website to give you the most relevant experience by remembering your preferences and repeat visits. By clicking “Accept All”, you consent to the use of ALL the cookies. However, you may visit "Cookie Settings" to provide a controlled consent.
Cookie SettingsAccept All
Manage consent