The race is on to develop a banana variety resistant to the diseases and climatic changes that currently threaten the world’s favourite fruit. International trade in the fruit is worth […]
Mon 25/06/2018 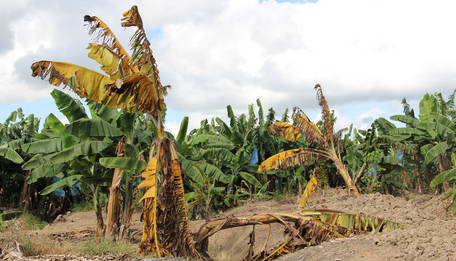 The race is on to develop a banana variety resistant to the diseases and climatic changes that currently threaten the world’s favourite fruit. International trade in the fruit is worth US$13bn a year. But the global supply chain is threatened by a virulent disease that has been attacking plantations in Australia, south-east Asia and parts of Africa and the Middle East. Experts warn that “Fusarium wilt”, or Panama disease, could spread to Latin America, from where the majority of bananas are exported, prompting scientists to research new varieties. The Cavendish variety currently accounts for 99.9% of bananas traded globally, having itself replaced a tastier variety wiped out by disease in the 1950s. Now researchers at Tropic Biosciences in the UK are using gene-editing techniques to develop a more resilient version of the Cavendish. The company’s CEO, Gilad Gershno, said, “If you look at the broader consumption on top of exports, the banana industry is worth a massive $30bn a year. However, people have been getting increasingly worried because the plant is heavily cloned so if you have a disease that can kill one tree, it can potentially wipe out the entire industry.”

Tropic Biosciences has already conducted successful gene editing on a banana cell which can be grown into a full plant. The preliminary results have been encouraging and field trials should begin in Central America, the Philippines and Turkey over the coming year.

As the disease is spread by aphids, the only treatment is to uproot and burn all the plants, which is very costly. Last year, researchers from Queensland University of Technology in Brisbane, Australia, designed a genetically modified Cavendish banana with resistance to the soil-borne Panama disease.

Category: Uncategorized
Tags: Banana, Cavendish, Fusarium wilt, Resistance
We use cookies on our website to give you the most relevant experience by remembering your preferences and repeat visits. By clicking “Accept All”, you consent to the use of ALL the cookies. However, you may visit "Cookie Settings" to provide a controlled consent.
Cookie SettingsAccept All
Manage consent