Vivero El Pinar, a Segovian company specialising in introducing new varieties of strawberries to the market, is now well into the development phase of three new varieties bound to appeal […]
Fri 14/02/2014 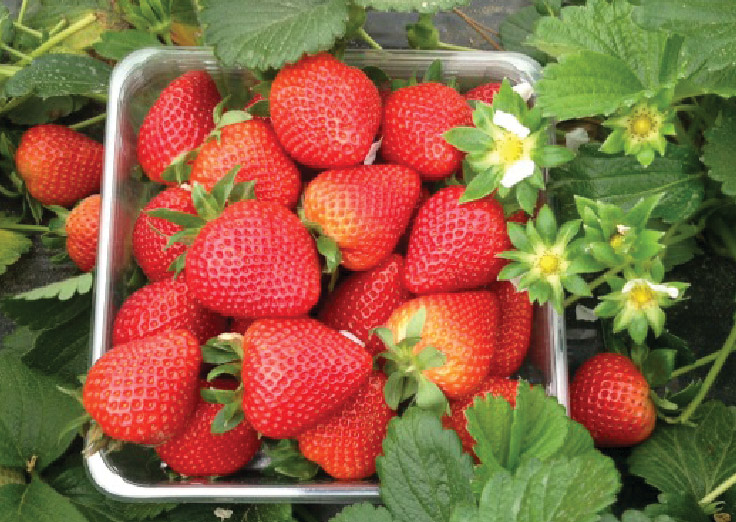 Vivero El Pinar, a Segovian company specialising in introducing new varieties of strawberries to the market, is now well into the development phase of three new varieties bound to appeal to farmers in southern Europe and North Africa. On one hand – available only to Surexport and SanLucar Fruit in Spain, Portugal and Morocco – we have the BG4316-Victory: “An early variety, highly productive in with very good post harvest features”, explains Manager Mario Esteban. It is already being grown commercially and “with very good results, both for farmers and the markets, where it has been catalogued from the outset as high quality fruit according to their standards”, adds Mario.
In addition, they have the BG4315-Liberty, an early mid-season variety. This cultivar is characterised by its medium size, good flavour and Brix degree, as well as its conical shape and light red colouring. “This is its first trading season, while it is also being tried out with good results from farmers in several countries”, continues Mario. The El Pinar spokesman adds that it has been very well received in supermarkets. The third variety is BG4352, still in the research phase. It is a very early variety, large sized fruit with a pleasing colour and good Brix level.
Splendor is the most well-known variety from El Pinar and the most widely planted in Spain, accounting for roughly 40% of strawberry crops. This season they have gone from 180 million plants to 200 million, 13% more than the previous campaign. The firm’s presence is also growing in countries such as Italy, Greece and Morocco.
El Pinar continues to work towards main objective: to find the variety that best suits the farmer’s conditions. MP

Category: Uncategorized
Tag: Berries
We use cookies on our website to give you the most relevant experience by remembering your preferences and repeat visits. By clicking “Accept All”, you consent to the use of ALL the cookies. However, you may visit "Cookie Settings" to provide a controlled consent.
Cookie SettingsAccept All
Manage consent