Mediterranean production: winter crops down 50%, prices higher Despite fairly regular export activity from France and the Netherlands, prices in European ware potato markets decreased in January and February. The […]
Thu 03/04/2014 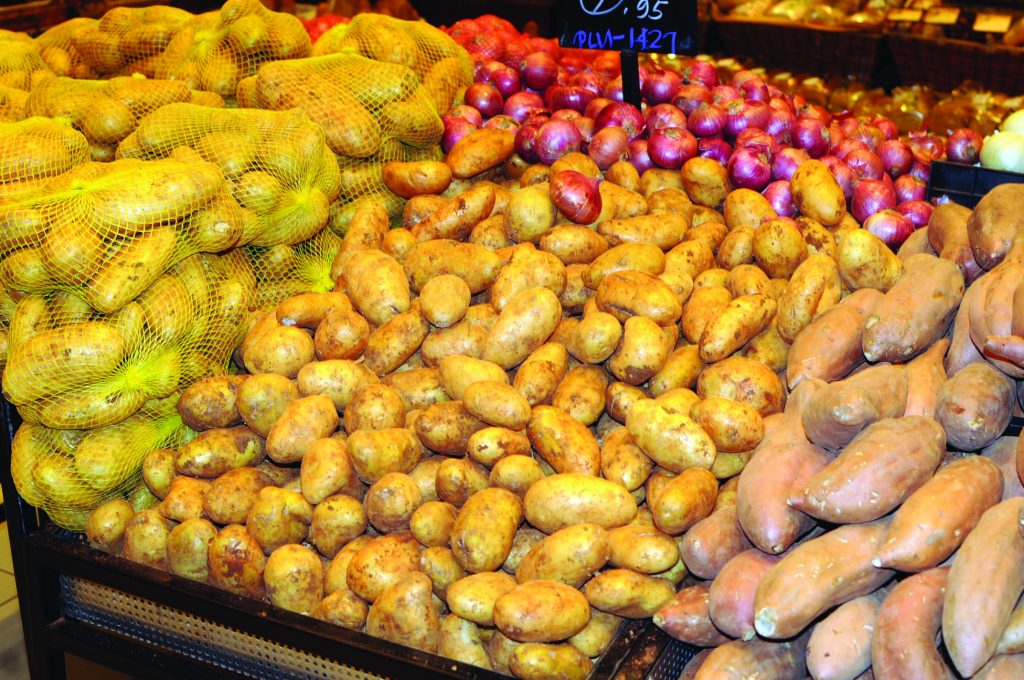 Despite fairly regular export activity from France and the Netherlands, prices in European ware potato markets decreased in January and February. The main reason lies with the processors, who provided almost no demand. They had bought considerable volumes in November and December for late delivery in order to complete their needs beside the pre-season contracted tonnages. It should also be remembered that they are probably less competitive than their American “colleagues” in some markets (in Asia and South America).
Over the same two months, producers remained reluctant to sell at low prices (below 120,00 €/ton) as they were optimistic about a market recovery later in the season. Stock enquiries in February revealed contrasted pictures: more potatoes in storage than last year in France, Great-Britain and Belgium, related to the higher final production in 2013. Dutch figures showed higher stocks, but with a higher proportion already sold. Those figures, associated with the sudden increased demand by some traders, led to slight price increase in the first days of March.

Unpredictable markets until the end of the season
A first influence comes from the early crops: processing earlies were planted mainly in the first week of March in Germany (Rhineland), and planting started in the second week in Belgium (Flanders). That’s more or less one week earlier than the ‘normal’ period but will they grow later? Will Russia finally open its border to European potatoes? Or will the market remain too quiet with scarce processing demand?
The export activity from Dutch traders hasn’t been bad but the relevant volumes were insufficient to change the price trend during the first weeks of 2014.
Compared to last year, the cumulative totals at the end of January (see charts) show better trade to Germany, eastern countries and Italy, but that didn’t offset the lower exports to the United Kingdom. As far as more distant destinations are concerned, imports were markedly down in Africa and America. French exports at the end of January showed similar trends to the main destinations.

Israel and Egypt
In December 2013, the Egyptian and even more so the Israeli early potato crops were affected by snow, frost and generally cold and wet weather. The Israeli crop was planted in hot conditions at the start of December and was then affected by the cold weather at the end of the month. Low tuber numbers were reported, the consequences of which are only being felt now: lower tonnages (up to 50% less for the winter crop) and higher prices (particularly for the Israelis).
In the first two weeks of January, 15,000 t of Egyptian earlies were sent abroad, mainly to Russia. At the onset of February the price of Egyptian earlies was around 51 €/100 kg delivered to Russia. From February 15–20, the first Egyptian earlies arrived in Ukraine at prices of 60–64 €/100 kg.
At the beginning of March, 123,000 t of Egyptian earlies had been shipped abroad, that is twice as much as for the same period last year. Over January and February the Russians imported 38,000 t against 3,449 t for the same months in 2013. During the same period 21,000 t were shipped to Europe, which is down a bit on a year ago.
In 2013, the Egyptians exported 420,000 t of earlies. In autumn 2013, it was estimated that 2014 exports would be around 450,000–500,000 t. To date, the Russians have imported far more potatoes than last year, not only round varieties like Spunta but also higher-priced waxy (firm fleshed) potatoes. At the start of March, Russian buyers were paying 45 €/100 kg FOB Alexandria.
Nevertheless, two factors which could slow down Russian imports are, on the one hand, more cases of brown rot (Ralstonia solanacearum), two cases having been found in early March in the Black Sea port of Novorossisk, and, on the other hand, global yields. Following the cold spell in December, reports indicate that Spunta yields fell from 24 t/ha last year to 10 t/ha this year, and that for waxy potatoes, yields are around 7–8 t/ha this year instead of the average 17–19 t/ha last year.

Israel
Russian and Polish buyers were paying between 48 and 50 €/100 kg mid-February for Israel news, with prices easing at the start of March to around 40–45 €/100 kg. Some Israeli crop were sent to north-western Europe (starting with the UK) but at much lower tonnages than in 2013. The cold and wet weather (snow!) around Christmas affected the crop and growers were getting 42.25 €/100 kg for their potatoes at the beginning of March.
Until mid-March, Israeli earlies were mainly going to the UK. Maris Peer were paid franco in the UK at 72.50 €/100 kg. Up to March 5, there were 6.000 t free of taxes.

Cyprus
The Cyprus winter crop (planted end October – beginning of November) was a good one and was harvested in January-February and sent to north-western Europe (mainly to the UK, a small amount to Germany) and Greece. The last of the winter crop was cleared around mid-March.
The spring crop is looking good and harvesting started in the second and third week of March. Due to the mild weather, the harvest could be 10% greater than last year, when frost damaged the spring crop. Other sources say the dry and hot weather (above 20 °C mid February) could affect the final production figures.
Last year, 71,000 t of earlies were shipped, most of them (24,000 t) to the UK. This year a good deal of the crop will also be going to Greece, the Balkans and eastern Europe.

Southern Italy
Early potato areas in Sicily and around Naples have been extended, probably around 30%! Last year 14,760 ha were planted and this year it is 16,400 ha. In 2009, there were nearly 21,000 ha of earlies in Southern Italy. Due to cold and wet weather at the start of the year (the whole of January and early February), some of the crop was planted later than usual, and the rest was slowed down. The first big shipments will arrive late in north-western Europe, that is around April 15.

Southern Spain
In spite of planting 15–20% more earlies than in 2012–2013, the early area is smaller than the 2012 one. About 90% of plantings around Seville were done between 15 December and 15 January. In the Cadiz region, 60% of the potatoes were planted on schedule, then the rain came and the rest of the planting was done weeks later due to the bad weather. In the Murcia region, the traditionally smaller early potato area has been extended.
In Andalusia, 1,847 ha of extra earlies were planted this season (1,445 ha last season) and 4.102 ha of earlies (4,108 ha last year). Last year’s production of extra earlies was 34,497 t while this year it was 33,000 t (-4.3%).
First Majorcan Lady Christls arrived in north-western Europe (mainly the UK) at the end of February (at prices around 95–100 €/100 kg), and first Maris Peers were reported in the UK in the third week of March.

Portugal
From the start of January to late into February it was rainy and cold in Portugal. Plantings were done weeks later than normal, but areas already planted suffered from cold and excess rain, and even flooding, such as that striking early potatoes in the Tejo valley. In early February, 20–30% of the early potato area had been planted. The delays have also affected seed potatoes and seen their quality deteriorate. This could reduce total yields, even if the early area has been extended 10 to 20%.
Last year Portugal sold 49,000 t of its early potatoes abroad, of which 11.000 t went to Germany.
PL

Category: Uncategorized
Tag: Potato
We use cookies on our website to give you the most relevant experience by remembering your preferences and repeat visits. By clicking “Accept All”, you consent to the use of ALL the cookies. However, you may visit "Cookie Settings" to provide a controlled consent.
Cookie SettingsAccept All
Manage consent