The Portuguese-Brazilian group is currently planting 2,000 hectares of almond trees in Beira Baixa, one of the most promising regions in the Interior of Portugal. The goal is to reach […]
Mon 08/07/2019 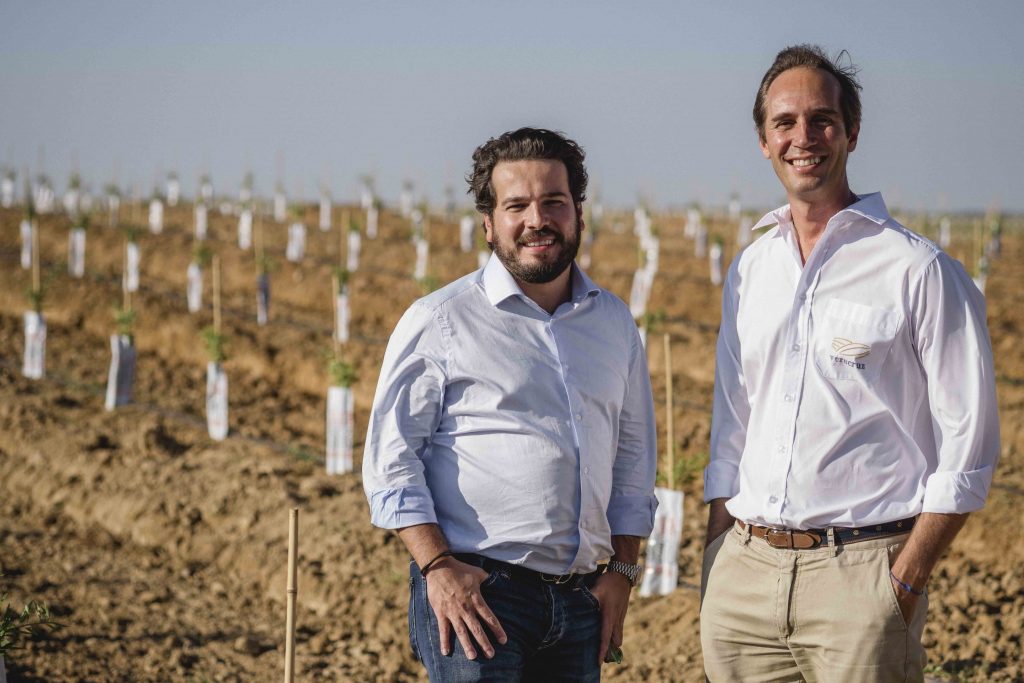 The Portuguese-Brazilian group is currently planting 2,000 hectares of almond trees in Beira Baixa, one of the most promising regions in the Interior of Portugal. The goal is to reach 5,000 hectares. The project also includes the installation of a shelling and processing plant for almonds.

There will be more than 3 million almond trees on two thousand hectares of land, spread over five farms located in two counties of the Portuguese interior, Fundão and Idanha-a-Nova. The investment of €50 million in the almond plantation that the Portuguese-Brazilian Veracruz group is growing in the Beira Baixa region is one of the largest agricultural projects ever carried out in the district of Castelo Branco – and has just been recognized by the Portuguese Government as a PIN (Potential National Interest), a directive that highlights enterprises with relevant impact in the country and which promote economic, social, technological and environmental sustainability.

When the plantation is fully installed and production is fully up and running, these fields will produce 4 thousand tons of almonds, all of them traditional Mediterranean varieties. This is the first phase of Veracruz’s investment which, in the future, and through the opening of capital to other investors, should reach 5,000 hectares of almond trees planted.

“One of our mission is to make Portugal an important player in the sector of nuts in Europe. Due to its soil and climate characteristics, Portugal has great potential to become an important reference for almond cultivation, which currently is concentrated in California, accounting for 80% of total production. On the other hand, because of its geographical location, we are very close to consumers, since Europe accounts for more than 40% of global consumption”, said David Carvalho, co-founding partner of the company that expects to export about 70% of production. Stressing that there is already an international recognition of the quality of products produced in Portugal, the businessman believes that “it is possible to enhance the reputation of the ‘almonds of Portugal’ brand, similar to what has happened in the wine and olive oil sectors”.

Filipe Rosa, co-founder and partner, says that the choice of Portugal and, more specifically, the region of Beira Baixa was due not only to the climate and soils perfectly adapted to the culture, but also “to the availability of land and water. And, as importantly, the political will demonstrated by local mayors to welcome our project and reverse the process of desertification in the Interior. We are an ‘anchor project’ that aims to create a production cluster to add value to this region. We are going to create more than 150 direct and indirect jobs in the coming years and we are committed to hiring local labor whenever possible”. The businessman points out that this is still the first phase of the project: “In the very near future, with the right partners, we intend to expand our impact and increase our plantation to 5,000 hectares”, he adds.

The Veracruz venture also foresees, by 2021, the installation of a shelling and processing plant for almonds in the same region, with an investment of €6.5 million. With capacity to receive and transform the production of other local producers, guaranteeing them channels to distribute their product, this unit will attract other investments in almond trees for those counties and rehabilitate abandoned land, promoting economic and social development of the area.

Betting on the latest technologies in smart farming, this project employs drones and satellite capture images to follow the development and health of the plants. Simultaneously, it implements the most sustainable precision agriculture technologies and a circular economy, with, for example, the introduction of probes into the soil for monitoring water use and fertilizers. In addition to scientific and technological partnerships with local institutes and universities, Veracruz intends to support agrotech startups by offering part of their land as exploration and showroom fields for these new projects.

The company was founded after an exhaustive economic-financial study on the cultivation of almonds worldwide, undertaken by the partners David Carvalho (Brazilian descendant of Portuguese, founder and manager of several technology companies in Brazil) and Filipe Rosa (a Portuguese serial entrepreneur who has launched six technology startups on both sides of the ocean). With the intention of working the land and applying the most advanced agricultural technologies, Veracruz installed its headquarters in Castelo Branco and, in 2018, started the almond plantation in Fundão and Idanha-a-Nova. The company is working together with other producers in this sector in Portugal at the launch of the National Association of Dry Fruits Producers, interested, among other objectives, in producing sustained knowledge about the sector and its practices.

Category: Uncategorized
Tags: almond plantation, Portugal, Veracruz
We use cookies on our website to give you the most relevant experience by remembering your preferences and repeat visits. By clicking “Accept All”, you consent to the use of ALL the cookies. However, you may visit "Cookie Settings" to provide a controlled consent.
Cookie SettingsAccept All
Manage consent