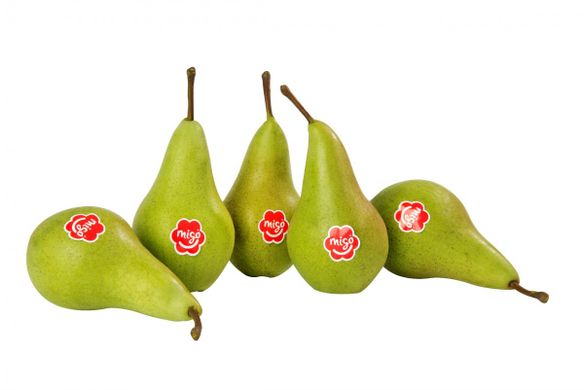 Last Wednesday, February 6, the visitors of the FruitLogistica trade fair were surprised when 2 fully dressed clowns showed up on the exhibition floor. It turned out to be 2 ‘Red Noses Klinikclowns’. They came especially to Fruit Logistica to confirm the cooperation between the German Red Noses Clowns organization and the pear brand Migo®.

The Red Noses received a donation of €10,000 from the Managing Director Jürgen Nüssle of the growers’ organization ‘Württembergische Obstgenossen-schaft’. Consumers in Germany have helped to bring ill children a priceless smile on their faces through the purchase of Migo® pears. During the ‘Migo® Happy month’ at the beginning of the pear season last November, the annual kick-off was given for the collaboration between Migo® and the Red Noses Clowns. Under the slogan ‘Let’s smile together’ Migo® sponsors the Red Noses Clowns organizations in Germany, Belgium and the Netherlands. In Germany Migo® pears are grown by growers of ‘Württembergische Obstgenossenschaft’ and marketed via ‘Obst vom Bodensee’.

Esther Dworak of Obst vom Bodensee said, “Every year more and more German consumers discover the Migo® pear with its crunchy bite. The pear convinces by its sweet taste, but the most important thing is that this pear can be eaten without getting messy. As a result, this pear can simply be eaten out of hand, just like an apple, for example. This makes Migo® particularly suitable for on-the-go consumption. We see a steady increase in demand, which is why many new trees are being planted in Germany so that we can continue to meet the demand of German consumers in the coming years.”

The Red Noses Clowns give small patients in the children’s hospital, elderly people who need care, seriously ill people of all ages and people with disabilities exactly what makes them feel good: real encounters and a smile.

This idea originated in the US in the 1980s and soon was adopted in Europe. Various Red Noses Clowns associations are active in Germany. In 2004, an umbrella organization was established (“Dachverband Clowns in Medizin und Pflege Deutschland”) that represents the interests of the various associations.

Category: Uncategorized
Tags: Fruit Logistica, Migo®, Red Nose Clowns
We use cookies on our website to give you the most relevant experience by remembering your preferences and repeat visits. By clicking “Accept All”, you consent to the use of ALL the cookies. However, you may visit "Cookie Settings" to provide a controlled consent.
Cookie SettingsAccept All
Manage consent