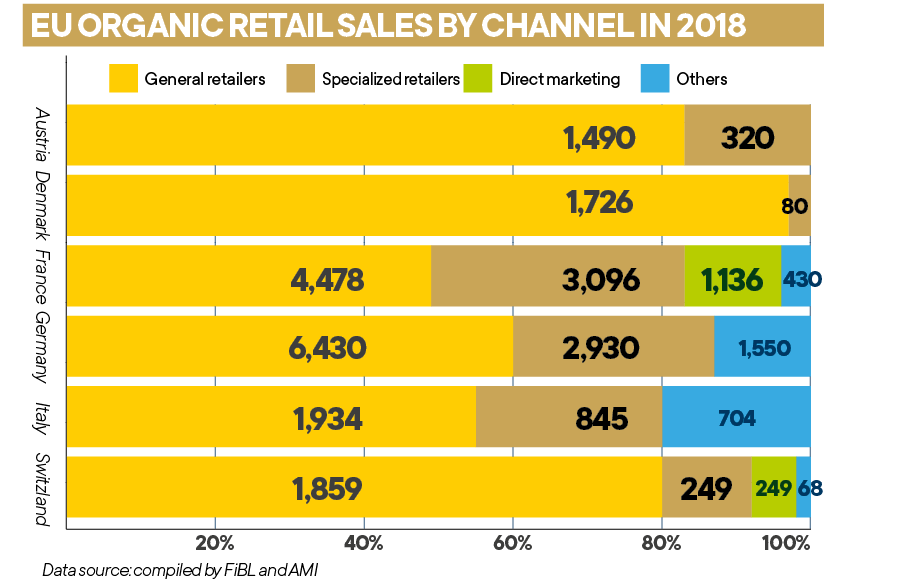 With organic demand rising across the world, markets are changing as large-scale retailers push for greater market share and seek to outdo one another to establish their green credentials.

The world appears to be decisively turning its back on practices that are unethical and damaging for the planet. This is evidenced by the worldwide boom in sales of organic food and drink, which surpassed the US$100 billion mark for the first time in 2018, with global revenue increasing by 6% to $105 billion, according to a report published by Ecovia Intelligence. The largest markets are North America and Europe, which account for a combined 90% of the world’s consumption of organics. While sales remain concentrated in the West, the share has declined from the 2005 level of 97%, with organic sales growing in China, India and Brazil. Denmark has the highest per capita consumption of organics in Europe, and this is reflected in the fact that organic products receive great prominence on the shelves of the country’s general retailers. In fact, 96% of all organic sales in the Scandinavian country occur in general retailers (source: FiBL and AMI). By contrast, less than half of organic sales in France take place in general retailers, with specialised retailers accounting for about 32% of total sales revenues, and direct marketing also contributing a significant amount (12.5%). The picture in Germany bears more resemblance to the French than the Danish scenario, with general retailers accounting for around 59% of organic sales and specialist stores contributing 27%. France’s Biocoop project promotes sustainable organic farming and fair trade. Founded by committed consumers, the Biocoop network strives to place ethics and cooperation at the centre of its activity and development. It consists of 3,600 farms, 425 employee shareholders, 3 consumer associations and 20 farmer cooperatives. The over 400 products sold in bulk at Biocoop stores are 100% organic, and 23% of them are certified fair trade. With the radical changes taking place within the organic market, Biocoop favours and incentivises suppliers who, according to the project’s strategy “can guarantee stable development with ecological transparency and coherency”.

In 2018, Biocoop opened 70 new stores, taking its network to 600 outlets across the country and its turnover to €1.2 billion. Biocoop’s products are grown on over 3,600 farms that have signed up to the project along with 21 farmer cooperatives. Meanwhile, Biocoop has expanded the project to the foodservice channel, which is also fast expanding. Offering more than 900 specialist products to 5,200 customers in this sector, turnover in this segment was up 22% in 2018.

The project is in constant and rapid expansion, with large-scale investments in the last year seeing the opening of new warehouses to serve the different regions of France. The 54 trucks of the Biocoop transport company (STB) collect from producers and supply partners and deliver to all the network’s stores. Biocoop has also invested in marketing, using TV and online campaigns to spread news of its good work.

In Germany, the REWE retail group has been selling organic foods for over 20 years, highlighting that the retailer doesn’t see it as just a passing trend. The retailer’s fruit and vegetable section alone contains around 50 types of organically grown produce and is helping to drive the further development of and transition to organic agriculture. REWE’s guidelines state that the firm monitors how its products are produced, as well as immediately upon arrival at its stores, commissions accredited inspection bodies to conduct product analyses in accordance with its own exacting standards.

“Packaging altered for over 1,000 references”

Now, the REWE Group has published guidelines for environmentally friendlier packaging and has already eliminated 7,000 tons of plastic per year from its REWE and Penny stores. This has so far involved altering how over 1,000 references are packaged and discontinued the use of plastic bags in all of its stores in 2016. Using a product-specific analysis, REWE identified packaging groups for relevant plastic savings and further optimisation to avoid, reduce and improve packaging materials with regard to environmental friendliness, with the criteria binding for all suppliers. In the case of fruit and vegetables, this has involved natural branding, such as laser logos, or the use of grass paper.

Organic heroes to appeal to children

Meanwhile, to promote consumption of organic fresh produce, Penny has introduced a new concept targeting children: the Naturgut organic heroes. The idea behind these heroes organic heroes is to educate people that appearance does not equal taste; so even when fruit and vegetables do not visually comply with the norm, they can have excellent taste, quality and durability. According to a company press release: “Because no synthetic and chemical fertilisers are used in the cultivation of organic heroes, it is only natural that they have little quirks every now and then. This is exactly what makes them our Naturgut organic heroes, which can be found on the shelves at PENNY stores.