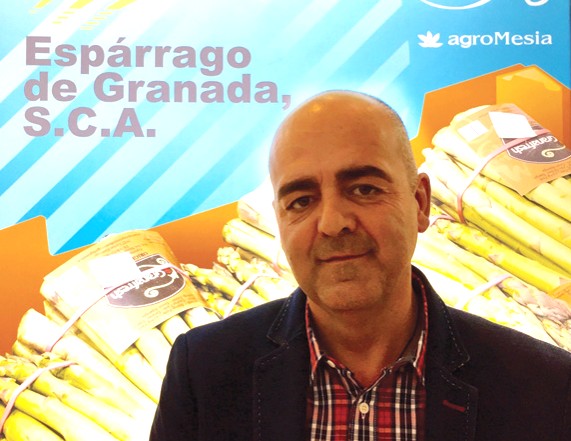 This second-tier cooperative consists of 5 first-tier cooperatives producing top grade asparagus in Granada, with some plantations in Malaga. It currently has 500 ha in production, which increases 20-30% annually, equivalent to 3 million kg of asparagus, with all certifications required by the European market.

Espárrago de Granada manager José Antonio Sánchez said growing its own produce makes the coop unique, “as we have continuity and can control quality from the minute the seed is sown.”

“We’re usually in the market a week in advance and we have more uniform produce, as we have plantations in two areas,” he said.

The large variety is the one most widely planted, but the company is also trying out new cultivars from Dutch seed nursery Lin, but although Sánchez thinks they will do quite well, it will take a year to certify that everything is running smoothly.

Espárrago de Granada’s main market is Germany, followed by Denmark, Sweden, the Netherlands and Poland. The latter has been on the rise for the past two years and is increasingly demanding more produce.

Growth is also being seen in Scandinavian countries and the UK.

Category: Uncategorized
Tags: asparagus, ed145, Espárrago de Granada, José Antonio Sánchez, Lin
We use cookies on our website to give you the most relevant experience by remembering your preferences and repeat visits. By clicking “Accept All”, you consent to the use of ALL the cookies. However, you may visit "Cookie Settings" to provide a controlled consent.
Cookie SettingsAccept All
Manage consent