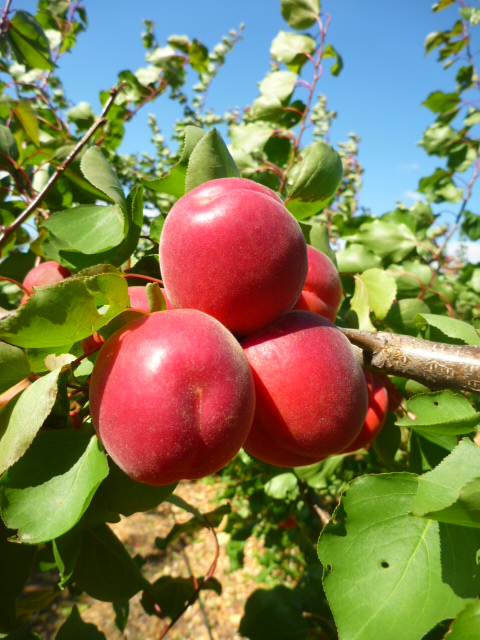 Since the launch of the Carmingo® apricot range, International Plant Selection (IPS) has risen to the challenge of offering producers attractive, high-quality taste varieties on an extended maturity calendar with greater geographical adaptation, optimised thanks to their self-fertility. Resistance to Sharka is now one of the selection criteria, and thanks to the evolution of new technical selection tools (validation by the PROTOCOL PPV-Ctifl 2017-2019) IPS is now able to position its range. The year 2020 is marked by the official launch of the Carmingo®Primassi (cov) IPS27.12 variety, a two-tone self-fertile variety which is harvested 7 to 10 days after Colorado. Flowering is relatively late for an early-maturing variety. The vibrant orange fruit has a bright red overprint on 50 to 70% of the epidermis. Elliptical in shape it is fine textured, tender and juicy. The flavour is fragrant and aromatic. The production potential of the variety is confirmed in all areas of production with a 2A the dominant calibre.

Carmingo®Primassi (cov) apricot variety was successfully presented last May 28th in Ille-sur-Têt (France) at the farm of Mr Guillaumat, along with other promising and very Carmingo@Prialina (cov) apricot, harvested 10 days earlier. The event counted with the participation of the major stone fruit farmers of the Roussillon valley. Other new stone fruit varieties by IPS were also presented like Blanto® white-flesh nectarine. It is proving to have a high production potential, attractive colour and great taste in the very early segment. Blanto@ also demonstrates a good firmness and aptitudes during post-harvest handling. It has a white-creamy colour flesh, sweet and aromatic, juicy flesh, with low acidity.

Within the same ripening-time segment as the Orangered®Barth, IPS proposes the red-skinned apricot Rubyngo®Rubissia (cov). The fruit is brightly coloured, round, has a fine texture, a  tender and juicy flesh, and an aromatic flavour. This variety is self-compatible and has mid-season blooming. It is also Sharka-resistant, according to CTIFL protocol 2017-2019. The variety’s production potential has been confirmed in all production areas, with 2A the dominant calibre.

“Rubyngo®” also has great agronomic potential and is fully self-fertile. Furthermore, Alexandre Darnaud said the good development of the range of late Stargrow and Carmingo apricots in South Africa, in collaboration with 4 grower and marketing companies: Fruit Unlimited, Stargrow Marketing, Delecta and Stem. “For the second year we have successfully exported Carmingo apricots by ship from South Africa with excellent results, particularly the Faralia and Farley varieties. Produced in January and February, they are sold in Europe in February and March, after 3 weeks of transport and 1 week at the point of sale. IPS also said the success of the varieties of red and black plums obtained by Stargrow, with IPS the licensee for the whole of Europe and North Africa. IPS is introducing a new range of varieties with 3 colours from the period of “Early Queen” to Angeleno. “We are also introducing new low-chilling varieties of Stargrow peaches and nectarines that are very promising and adapted to the area of Murcia,” Darnaud reports. Meanwhile, in the Honey Zee IPS range, the expansion is continuing in the earliest and latest range of nectarines.

In addition, IPS said the launch of the company Zeeco in conjunction with Royal to develop the variety of the Pluot@, a new concept of fruit between the plum and apricot. With their headquarters in Seville, Zeeco plans to promote the cultivation of Pluot@ throughout Europe and the Mediterranean basin. IPS-PLANT is also developing sales of varieties of almonds, obtained by Zaiger for Europe. Independencia is the recently planted variety in the Iberian Peninsula. Originally from California, it is self-fertile and high in productivity. It has a soft shell, which implies a different manufacturing process. It is also early flowering, with the same cycle as the Non Pareille.

Category: Uncategorized
Tags: Alexandre Darnaud, apricots, Delecta, Fruit Unlimited, IPS, nectarines, pluots, red apricots, Rubyngo®, South Africa, Stargrow Marketing, Stem
We use cookies on our website to give you the most relevant experience by remembering your preferences and repeat visits. By clicking “Accept All”, you consent to the use of ALL the cookies. However, you may visit "Cookie Settings" to provide a controlled consent.
Cookie SettingsAccept All
Manage consent