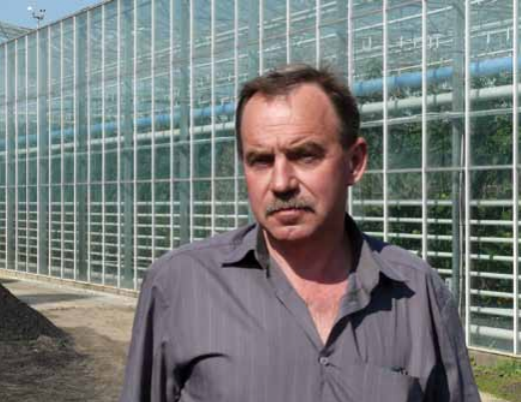 Poland’s greenhouse vegetables grew just 2% in 2015 to reach 1 million tons. Poland is in sixth position in Europe, with 5% of the market share.

The cultivation area of tomatoes under cover varies from 1,500 ha to 2,600 ha, and in open fields from 8,000 ha to 13,000 ha. Approximately 70% of the area of ground tomatoes is located in the Greater Poland, Kuyavian-Pomeranian, Mazovian and Świ tokrzyskie voivodeship regions.

Since 2004, open-field harvests of tomatoes have grown by 28%, and those under cover by 46%. In 2015, approximately 66% of harvested tomatoes were from cultivation under cover, and the other 34% from open-field cultivation.

Since Poland’s entry to the EU, fresh tomato exports have risen from 45,000 tons to 99,000 tons— i.e. more than double—and they account for about 11% of production.

The main direction for exports is the CIS countries and, among the EU member states, the UK.

The country’s tomato production will have increased by 1.5%, reaching 570,000 tons of greenhouse-grown vegetables, as in 2014, representing approximately 19% of Poland’s total vegetable harvest, according to a report from the Institute for Agricultural and Forest Environment (IAFE).

This was mainly due to delays in supply for the Polish market from southern EU countries due to unfavourable weather conditions during the autumn, which reduced the impact of the Russian embargo on vegetable prices in the domestic market.

The effects of the Russian embargo on prices are expected to be even greater in the second quarter of 2016, as soon as the domestic harvest starts.

This year most of the tomato production is staying in Poland. Because of this, Polish growers like Artur Matysiak from the Kalisz region have had more tomatoes available and prices have been under pressure.

Despite this context, Matysiak said Polish greenhouse tomato producers have already been working for years to adapt to changing conditions in the Polish market.

“Supermarket chains demand high quality, and while there is demand, it is mostly for good quality and the best varieties. We have specialised in premium products, so for us this situation is favorable.”

In fact, this is reflected in sales figures, which are growing every year. The farm, which has achieved success with its long-term business plan, is consequently far from discouraged by the situation caused by the embargo.

“Our farm is already one of the biggest in Central Poland, and we want to continue investing because high quality products are the future in the Polish market,” Matysiak said. Also, with the best technologies implemented in our greenhouses (such as growing lamps in winter), our production has grown compared to the previous year.

As far as development is concerned, the Matysiak farm is in fact currently in the process of building new greenhouses with an area of 5 ha, which will be added to the 4 ha it already has. “Next year, we will also start to build on at least another 5 ha,” the tomato producer said.

When it comes to the development and introduction of new varieties, “We are open to new varieties if our clients demand them, and we are currently testing a few. The most popular in Poland are raspberry tomatoes (pink beef tomatoes), which is the variety that people usually grow in their small house-garden greenhouses and the one we are specialised in,” Matysiak said.

He stressed the importance of specialisation, with newly-specialised production of vine tomatoes, plum tomatoes and sweet and cherry tomatoes. All in all, this year Matysiak expects to produce 2,200 tons, taking all varieties into account, and expects to develop sales to Germany and Central Europe.

Category: Uncategorized
Tags: greenhouse production, greenhouse tomatoes, Poland, Polish tomatoe
We use cookies on our website to give you the most relevant experience by remembering your preferences and repeat visits. By clicking “Accept All”, you consent to the use of ALL the cookies. However, you may visit "Cookie Settings" to provide a controlled consent.
Cookie SettingsAccept All
Manage consent