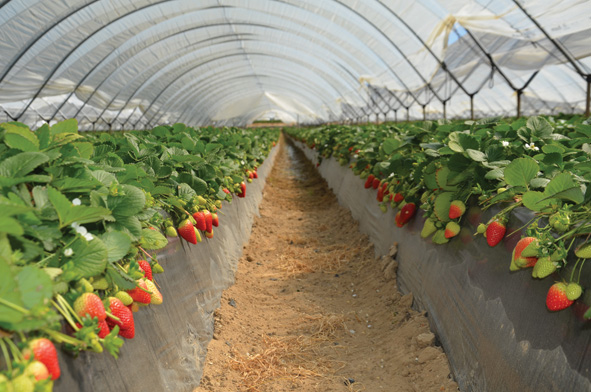 The 2015/2016 season has been very positive for the strawberry variety Florida Fortuna. The variety now holds 45-50% market share in Huelva. The high fall temperatures maximized its potential for earliness and productivity allowing growers to obtain the highest prices throughout the entire season.

Even after the inevitable price drop in the market, Florida Fortuna remains profitable due to its high yields. The excellent performance, consistent fruit quality and strong finish at the end of the season are the reasons that motivate the agricultural sector in Huelva to continue growing Florida Fortuna. It has proven to be the most profitable variety in the market yet.

For the 2016/2017 season Florida Fortuna once again remains the most widely planted cultivar in the sector. Its market share increased to 50-55% despite the overall decline in strawberry production in favour of other fruits such as raspberries and blueberries.

Due to the great success of Florida Fortuna in recent years, the University of Florida breeding programme remains in a strong position and continues to utilise the most advanced technologies in research and development.

Through the combination of traditional plant breeding and genomic-assisted breeding, Dr. Vance Whitaker and his team are able to evaluate double the number of seedlings in the first stage. This allows for a faster and more precise selection of new cultivars that express great potential for improved flavor, fruit quality, and disease resistance without jeopardizing earliness or high yield.

EMCO CAL has established trials in Huelva with the most promising advanced selections from the University of Florida breeding programme. The objective is to offer competitive, new commercial varieties that adapt well to the region. The company is committed to establishing synergies between strawberry producers, fruit marketers and plant breeding programmes in the industry while identifying new market niches for its variety portfolio.

EMCO CAL maintains good relationships within the major European markets. Through its participation in the leading international trade fairs, such as Fruit Attraction and Fruit Logistica, the company generates continuous opportunities for all involved in the industry.

This article appeared on page 78 of edition 145 (Sep-Oct 2016) of Eurofresh Distribution magazine. Read more berries and other fresh produce sector news in that issue here: www.eurofresh-distribution.com/magazine/145-2016-sepoct

Category: Uncategorized
Tags: Berries, EMCO CAL, Florida Fortuna, Huelva, strawberries, strawberry varieties, University of Florida breeding programme, Vance Whitaker
We use cookies on our website to give you the most relevant experience by remembering your preferences and repeat visits. By clicking “Accept All”, you consent to the use of ALL the cookies. However, you may visit "Cookie Settings" to provide a controlled consent.
Cookie SettingsAccept All
Manage consent