Système U, France’s 4th-largest general food distributor, is a cooperative that comprises 1559 stores throughout France (including the French overseas departments and territories), a 63,000-strong workforce, a national food headquarters […]
Fri 13/06/2014 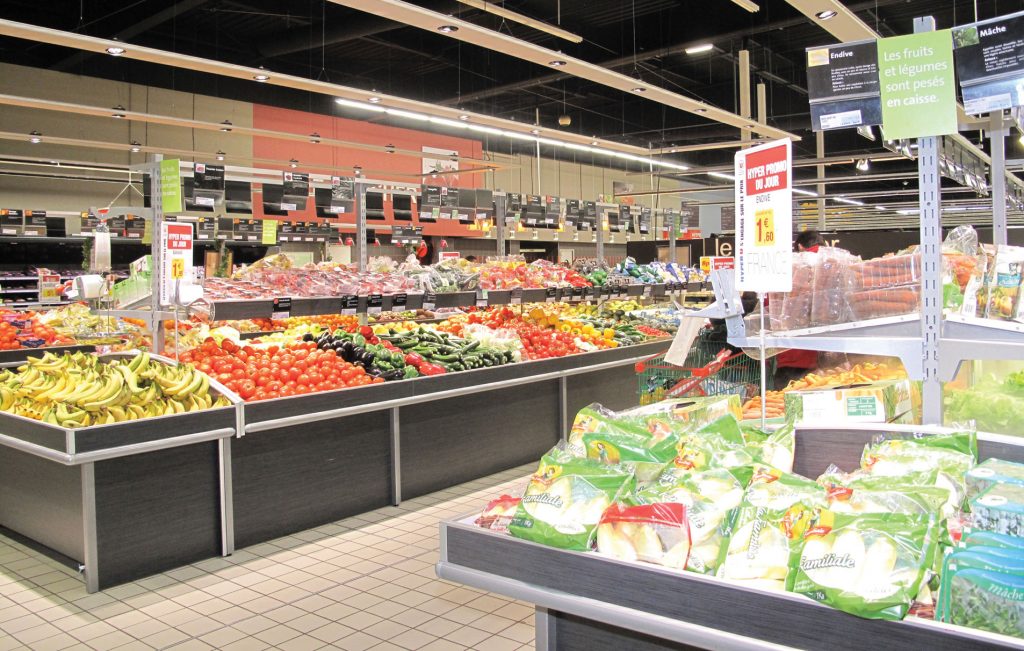 Système U, France’s 4th-largest general food distributor, is a cooperative that comprises 1559 stores throughout France (including the French overseas departments and territories), a 63,000-strong workforce, a national food headquarters at Rungis and four regional headquarters in the West, South, East and North West. The group’s U mark can be found in two discount chains (Hyper U and Super U) and three chains of neighbourhood stores (Marché U, U Express and Utile). Its 2013 turnover, excluding petrol sales, was €18.45 billion (up by 3,5%), with a market share of 10.3%. Système U Ouest (west), with 491 stores and a 29.5% market share, accounts for 48% of turnover. In 2013, Système U Ouest marketed 207,000 tonnes of fruit and vegetables, up by 22% since 2010, giving it 30% of this market in its region.

Partnerships with growers
One of Système U’s strong points is its support for French, regional and local products. 80% of the vegetables that Système U Ouest markets are grown in France, and local and regional supplies are encouraged. The company is increasingly committed to partnerships with the growers. All the U brand products, which make up 15-20% by volume of the fruit and vegetables, are grown under contract. Système U undertakes to buy a certain volume and the farmers undertake to comply with certain production criteria, particularly cutting down on pesticide use. At the end of 2012 the group signed a three-year contract with Coopérative BCO – SAS France Allium covering 1200 t/year of onions, accounting for 75% by volume of the onions sold by Système U. To meet the retailer’s requirements, the growers have concentrated on a specific variety with good resistance to mildew, enabling them to cut fungicide use by 30% and eliminate the classic use of an anti-sprouting product. In 2014, two new partnerships are under study for carrots and the white portion of leeks.
Another major thrust, to accompany the plans for 5% yearly store expansion and the strategy of logistics cost-cutting, sustainable development and defence of the local economy, is to set up short-chain fresh produce warehouses. At the end of 2013 the group opened a new fresh produce depot in the Vendée to serve its stores in the Vendée, Deux-Sèvres, Charente, Charente-Maritime and Vienne departments. Its anticipated throughput is 35,000 tonnes of fruit and vegetables. This is in addition to the group’s three existing fresh produce facilities in the west of France, in the Côte d’Armor, Loire-Atlantique et Indre-et-Loire departments. “Previously we had fewer fresh product warehouses but they were bigger”, said Serge Papin, the Système U chairman, at the opening of the new depot. “From now on our trump cards will be short chains, logistic proximity and buying local products”. To cut warehouse running costs, the group has already started to use robots for order picking and wants to develop this further.

New produce section
In 2013 Système U defined a new produce section concept, more labour-intensive but more attractive, that should be rolled out in 80% of its stores by the end of 2014 and in 100% within two years. It is based on a presentation that consists of placing the products flat on the display units, without any crates or boxes. This means they are laid out just one layer thick and are restocked more often during the day. The lettuces and green vegetables are also kept fresher by misting. To make the produce section more attractive and improve its flow, the weighing scales have been removed. Fruit and vegetables are now weighed at the checkout. An assistant is always on hand in the produce section. The range has been extended to include more organic products, heritage vegetables, exotic fruits and prepacks, among others. Another new departure is the creation of a Fraich Découpe section selling packs of fresh-cut fruit and vegetables. Lastly, the emphasis in 2013/14 is on staff training, both in-store and at a test laboratory to be built in 2014 (when the fresh-cut sections are introduced).

Category: Uncategorized
Tags: proximity, Retail, Système U
We use cookies on our website to give you the most relevant experience by remembering your preferences and repeat visits. By clicking “Accept All”, you consent to the use of ALL the cookies. However, you may visit "Cookie Settings" to provide a controlled consent.
Cookie SettingsAccept All
Manage consent