Add
At the 5th BioFruit Congress, held at Fruit Attraction in Madrid in October 2022, key players and experts in organic and sustainable produce supply shared insights on how demand is unfolding.
Tue 10/01/2023 by Julie Butler

GLOBALG.A.P.
GLOBALG.A.P. has tools to help produce suppliers communicate what they are doing to promote safe, responsible and sustainable agriculture. 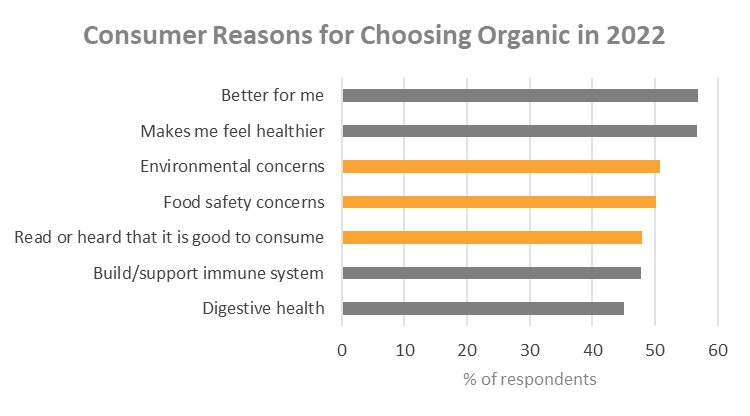 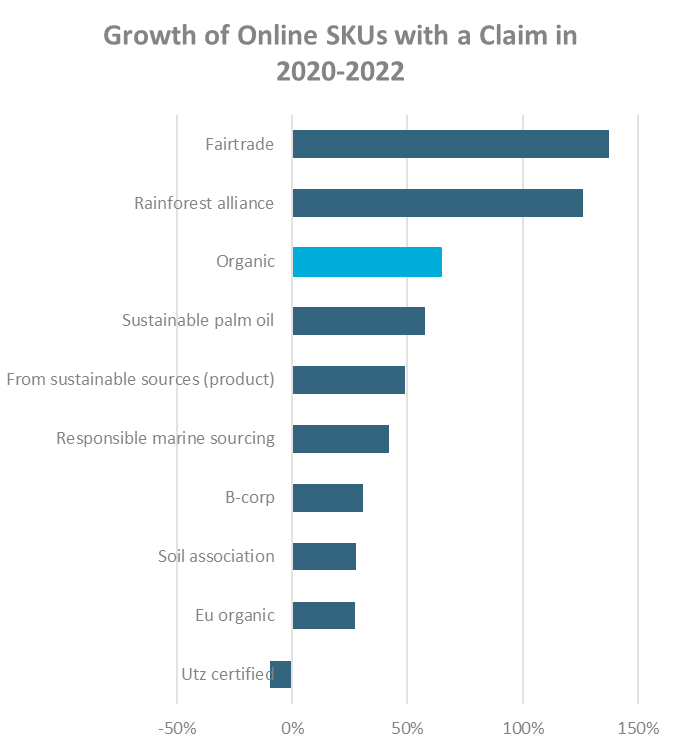 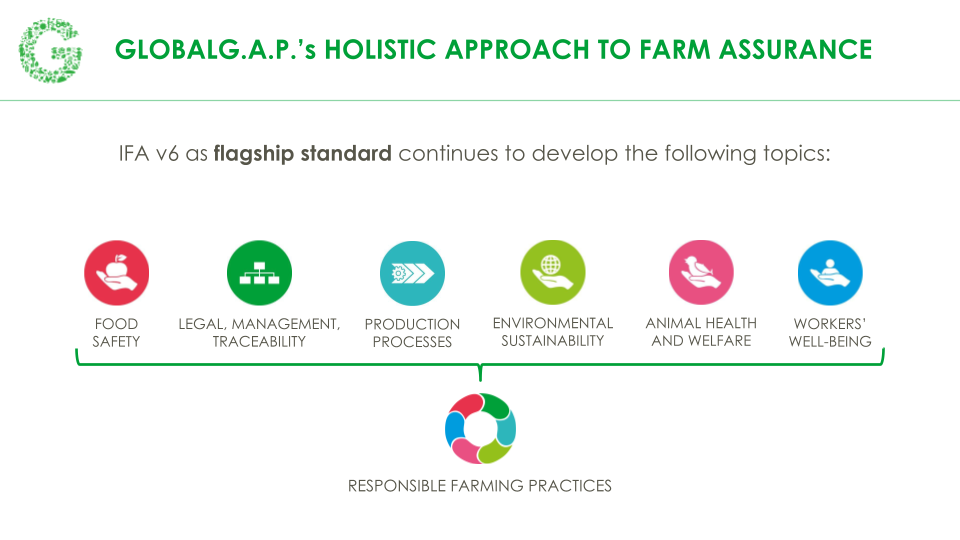 GLOBALG.A.P. has tools to help produce suppliers communicate what they are doing to promote safe, responsible and sustainable agriculture. 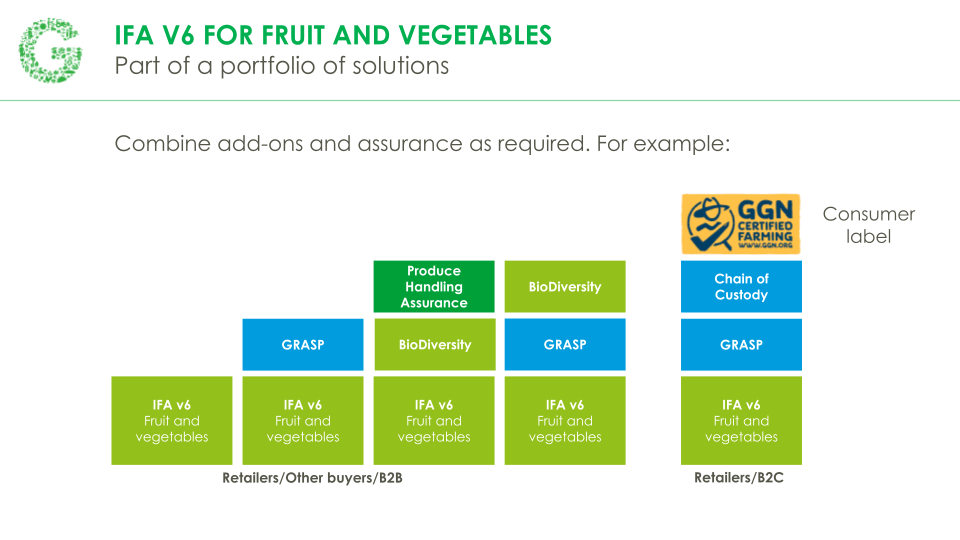 The GLOBALG.A.P. flagship standard for the fresh producer sector, IFA V6, can also be implemented with complementary sustainability-related GLOBALG.A.P. add-ons.

Organic remains the most popular food product claim in Western Europe, accounting for 14% of all claims on e-commerce platforms, followed by gluten-free and vegetarian, while in Eastern Europe the leader is no artificial preservatives (10%) followed by organic and gluten-free, Euromonitor’s Product Claims and Positioning tool shows. Euromonitor senior food analyst Simona Bernatonyte said consumers are also increasingly paying attention to transparency on ingredients, origin, production methods, ethical practices, packaging, and so on.

A leading supplier of fruit and vegetables to Germany’s organic wholesalers and retailers, Naturkost Schramm imports from Spain and France only and has various projects aimed at promoting values such as sustainability, trust, fairness and transparency. Quality manager Alexandra Farnos said one of them is its own organic brand Sivisio, which also meets the standards of Ecovalia Plus Social in order to address client demand for proof and transparency that the label’s Spanish growers are not just organic but socially responsible, too.

It’s envisaged that no later than 2045, and the earlier the better, above 80% of the global farming area will need to hold some kind of recognition of operating in a responsible, sustainable way.” – GLOGALG.A.P. senior technical expert René Capote

Similarly, Barcelona-based Veritas, Spain’s leading organic retailer, has B Corp. certification and was the first European supermarket with this recognition of commitment to both environmental and social responsibility. Chief Communication, Marketing & Impact Officer Sophie Pagnon said Veritas has over 6,000 certified organic products, 900 of which are under its private label.

Campiña Verde managing director Jose Tienda said there are trends in Europe that are both challenges and opportunities for organic suppliers, including demand for products and packaging that are more sustainable – or no packaging – as well as for good prices. Nevertheless, “We expect organic will double in the next five years,” he said. In 2021, Campiña Verde sourced 142,000 tons of organic fruit and vegetables for German retail group Rewe.

Tomás García Azcárate, deputy director of the Institute for Economics, Geography and Demography of the Spanish National Research Council (IEGD – CSIC) said today, other sustainable approaches like integrated pest management (IPM) and zero-residue schemes are a plus for conventional growers, but by 2030, will be a basic requirement. Growers who first adopt IPM find it easier to transition to organic, but he cautioned that demand for organic food must increase if further conversions are to be viable in Europe.

Not only being responsible, but being seen to be

In Spain, G’s España, a produce grower and distributor, is transitioning all its operations, both organic and conventional, to be based on regenerative agriculture principles in order to improve soil health and thus achieve flow-on benefits for environmental and social sustainability. Murcia-based G’s España technical director Christopher Abram said G’s is also working to understand how applying these principles may help increase its carbon sequestration as part of a goal of being net zero carbon. Asked if suppliers should better communicate their sustainability efforts to consumers, he said: “Food, whether organic or conventional, is safer than ever at the moment but I don’t think people understand how farms work and all the things we do to make sure they are appropriately sustainable.”

Asked if suppliers should better communicate their sustainability efforts to consumers, he said:

Food, whether organic or conventional, is safer than ever at the moment but I don’t think people understand how farms work and all the things we do to make sure they are appropriately sustainable.

GLOGALG.A.P. senior technical expert René Capote was asked about tools to help communicate what produce suppliers are doing to promote safe, responsible and sustainable agriculture. He said the recent launch of the GLOBALG.A.P. flagship standard for the fresh producer sector, IFA V6, can also be implemented with complementary sustainability-related GLOBALG.A.P. add-ons like the ones on water and biodiversity. The smart path to sustainability that the title of his presentation referred to also relates to the growing need for IT and data solutions and their implementation.

Ecovalia general secretary Diego Granado Cumbres shared a study showing EU organic crops in Mediterranean conditions have a smaller carbon footprint than conventional ones – 32% less in the case of field vegetables and 17% for those grown in greenhouses. The research suggests the most promising farm practices for reducing greenhouse gas emissions are the use of cover crops, renewable energy and traditional varieties, as well as reincorporating pruning residues and recycling agribusiness waste, but it’s also important to address other factors such as irrigation efficiency, packaging and transport, he said.