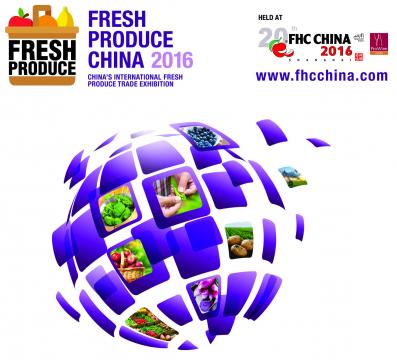 FHC China 2016 – China’s leading trade show for imported food and drink – returns to Shanghai November 7-9 with the highly anticipated, inaugural Fresh Produce China. It is an ideal platform for business introductions and negotiations with the participation of over 65,500 distributors, importers, retailers and catering purchasing teams.

Being held at the Shanghai New International Expo Centre (SNIEC), the show is set to be bigger than ever on its 20th anniversary with nine new countries being welcomed into the fold: Armenia, Egypt, Georgia, India, Malaysia, Mauritius, Ukraine, Slovakia and Saudi Arabia.

China’s fresh fruit imports have increased fourfold in the last ten years – over 3.8 million tons were imported in 2015 alone – meaning there has never been a better opportunity to start exporting to China. By the end of 2015 there were over 160 different fruits approved for import into China from 37 different countries covering everything from avocados to watermelons.

Improved cold-chain logistics and an ever increasing population of young urbanites have opened up new markets and driven huge growth in fresh e-commerce sales in recent years. The growth for of fresh e-commerce means that big service providers such as Alibaba and YihaoDian are now acting as both distributors and retailers, making them the key contacts within the sector.

With a growing population of 1.3 billion, Chinese consumer behaviour and demands keep shifting to accommodate the food needs, the show organisers, China International Exhibitions Ltd, said in a press release.

“Providing enough food at acceptable levels of quality and at an affordable cost is shaping up to be one of China’s most challenging problems. Lax quality control, production shortcuts, urbanisation and rising consumer spending are all combining to turn the spotlight on China’s food supply chain, creating problems — but also opportunities — for international companies doing business in the country.

“China’s middle class together with an increased number of foreign visitors and expatriates are fuelling the imported goods boom, as foreign produce is associated with safety and quality, which in turn creates willingness to pay premium price.”