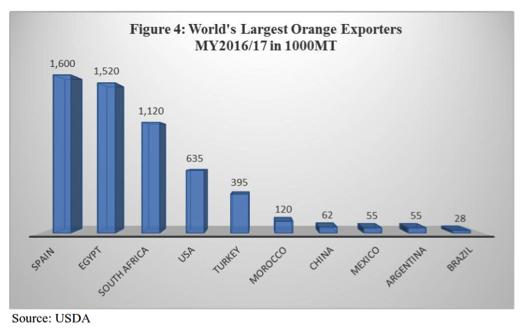 Demand for Egyptian oranges in the international markets has increased significantly over the last ten years. In 2016 the devaluation of the Egyptian pound made the country’s oranges more competitive on international markets with exports reaching 1.6 million tons in 2016/17, up 5% on the previous year. Egypt is set to remain the world’s sixth largest orange producer and the first or second largest orange exporter depending on Spain’s performance in MY2017/18. The main export markets for Egyptian oranges are Russia, Saudi Arabia, the Netherlands and China.

With such a positive outlook for Egypt’s oranges it is no wonder the country’s farmers are being encouraged to dedicate more planted area and the expense of other crops. Indeed, since 2006, the area planted with oranges increased by 41% to reach 146,950 ha in 2016/17. Orange is the most produced citrus species thanks to its good export value and the well-established supply chains which support small farmers. Oranges are grown in almost all of Egypt’s governorates and the harvest lasts four to five months. Navel oranges are the predominant variety, accounting for 60% of all orange production.