Add
Germans consumers are tightening their belts amidst rising inflation and are cutting consumption of fresh produce, causing concern for foreign suppliers.
Tue 03/01/2023 by Richard Wilkinson 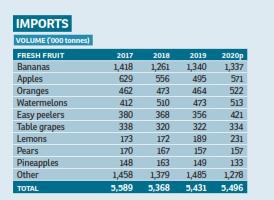 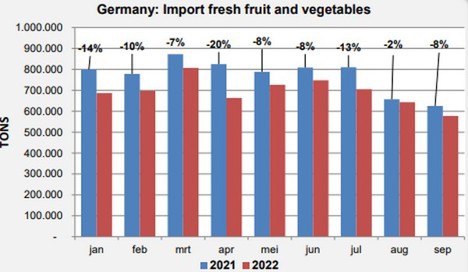 Fresh fruit imports on the fall 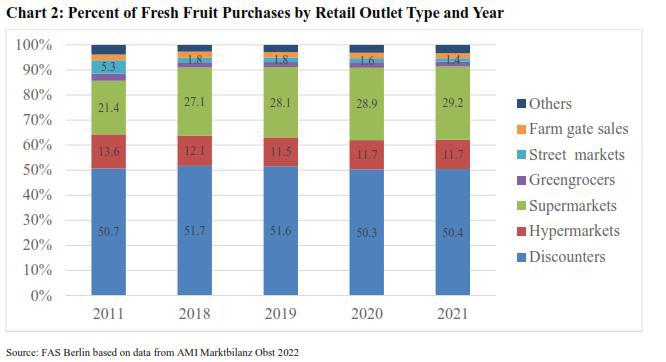 Europe’s biggest market Germany is mirroring the shifting consumption patterns evident across the continent, stemming from a combination of inflation, climate change and the pandemic. Surging inflation is driving German consumers to look for special offers and to make smaller purchases. Among the most hit categories are vegetables, with sales of conventional veg falling by 8% in volume over the first ten months of 2022 compared to the same period in 2021, and sales of organic veg down by 5.4% to pre-pandemic levels, according to data presented by Hans-Christoph Behr of AMI at a webinar organised by Enza Zaden in October. However, while overall sales of vegetables are down in all channels, the spend on organic vegetables is growing in discounters, with the value up 8% in the first nine months of this year compared to the same period in 2021.

Even tomato sales are tumbling

By category, the tomato continues to take pride of place in the German shopping basket, with German households purchasing over 800,000 tons in the first nine months of 2022. However, this is far behind the million tons bought in 2019. The favourite varieties of Germans are cherry and cocktail tomatoes, with small tomatoes accounting for almost half of total consumption and around 64% of spending. In value terms, tomato sales increased by almost 3.5% between 2021 and 2022, while volumes fell by over 3%, with the most hit being beef types and organics. While consumption of premium tomatoes grew during the pandemic, the situation has since been reversed.

As for peppers, spending is up, but volume sales have only risen very slightly. The California Red type has been the biggest winner of this crisis, although there is also strong demand for conical and mini snack varieties. Sales are rising particularly of conical pepper imports from Morocco and Turkey, which often feature in promotions. Similarly, in the cucumber segment, it is sales of mini varieties that have grown most in value, with these the only varieties of cucumber to see increases in volume terms. Once again, it is the discounters where sales performance is strongest.

As demand for fresh produce continues to fall in Germany, so too do import volumes. In the first nine months of 2022, Germany imported 10% less fresh produce than during the same period of 2021, according to CBS – Statistisches Bundesamt (SBA). Shipments from the Netherlands were the most affected, plummeting by 18%, from 1.18 million to 970,000 tons. Fresh produce arrivals from Spain fell by 8% over the same period.

Traditional supermarkets are no longer managing to differentiate themselves from discounters.

There has also been a notable drop in banana imports, which fell 8% from 1.08 million tons (Jan-Sep 2021) to 990,000 tons (Jan-Sep 2022). Similarly, imports of other major imported products were down, including watermelons, apples, oranges and onions, with just grape and peach imports rising (slightly).

Price is key but hope for premium products remains

As Germany is a very price-sensitive market, the recent rise in food prices has prompted leading retailers to stop selling products of some major manufacturers whose prices they consider “irrational”. Around 50% of all fresh fruit purchased in Germany is from discounters, with traditional food retailers (super and hypermarkets) holding a 41% market share, and street markets, greengrocers and farm-gate sales together accounting for only 5.3% (source: USDA). Behr believes that the dark economic outlook across Europe is leading consumers to be more conservative in their purchases and bringing about two clear trends. Firstly, traditional supermarkets are no longer managing to differentiate themselves from discounters, which have become the preferred purchase option, even for premium products. On a brighter note, there are still loyal consumers of premium products who are keeping the categories of small tomatoes and mini-cucumbers alive.