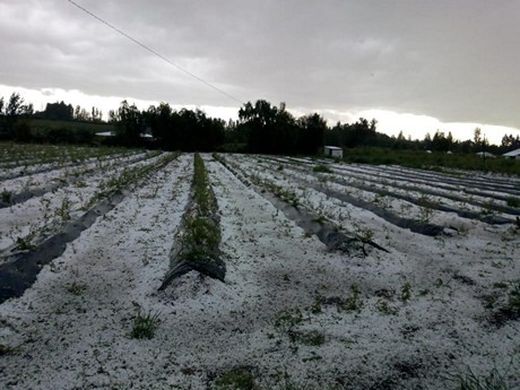 The fruit production areas of the south of Chile have been struck by heavy rains and hailstorms. According to the Chilean Fresh Fruit Exporters Association (Asoex), technical crews are still assessing the impact of the storms, which struck the O’Higgins, Maule, Ñuble, Bío Bío and Araucanía regions on 12th November. Many of the crops affected are at a critical stage in their development. Kiwi and grapes are in the flowering period, apples and stonefruit are in the growth stage, cherries and blueberries are about to be harvested.

The country’s Agriculture Minister, Antonio Walker, said he was very worried and described the situation as quite serious, although he refused to estimate the extent of the damage, stating that it was still too early to do so. Speaking to La Tercera, Walker said that many orchards are going to have to direct their production to the domestic market and will not be able to export.

In a statement, Asoex said summarise the information currently available.

“For stonefruit (plums, nectarines, peaches and apricots), it appears that the storm was more of an issue for the late varieties that are still in the flowering stage.”

Elsewhere, it is reported that blueberry production was barely affected as the main production regions were not directly hit by the storms. Cherries, too, are expected to have escaped the worst of the storms’ damage.  However, the second cherry forecast has been postponed to make a better appraisal of the situation. Preliminary estimates are for a 5% reduction in cherry volumes.