Successful growers of hydroponic lettuces and herbs are developping in the UAE. The Emirates Hydroponics Farms produce more than 25 varieties of leaf vegetables specializing in lettuces and herbs over 20,000m2 of […]
Thu 03/04/2014 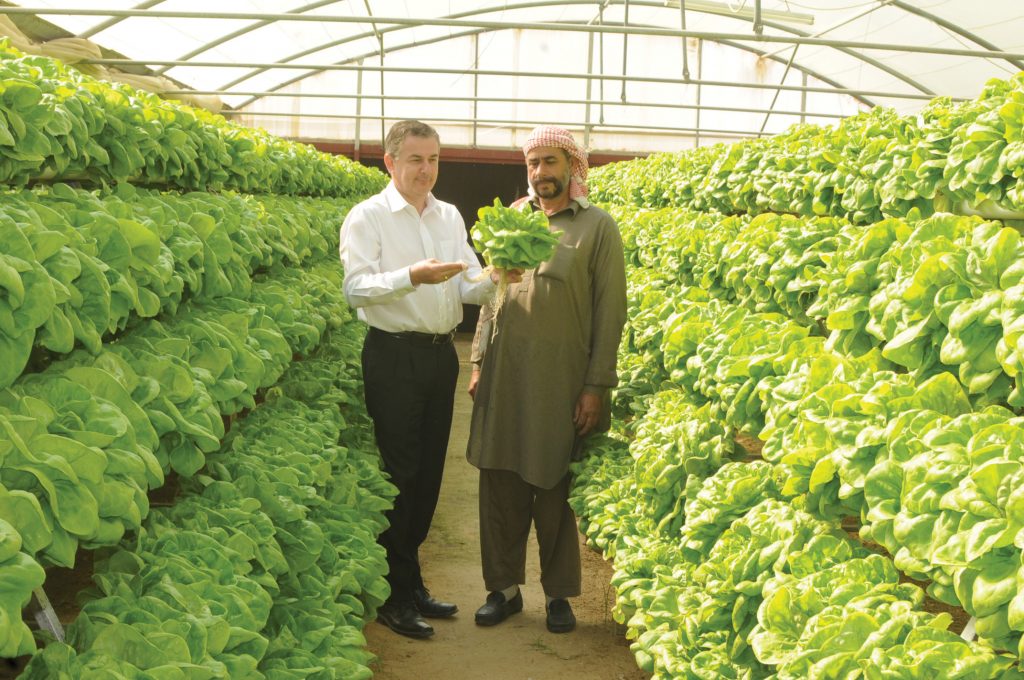 Successful growers of hydroponic lettuces and herbs are developping in the UAE.

The Emirates Hydroponics Farms produce more than 25 varieties of leaf vegetables specializing in lettuces and herbs over 20,000m2 of advanced growing systems. “Our major issue here in the Middle East is climate control during summer, when we face temperatures of 50ºC” explained manager Rudi Azzato, who was involved in the first installation. Founded in 2005, the company has invested in all the advanced technology necessary to succeed. Three types of production units have been created. These include a 9.5 meter high greenhouse with an area of 1000m2 for continuous production during the 12 months. This is equivalent to over 8,000 m2 of traditional farming. There are two separate areas of 9000m2 and 8000m2 using both NFT and Flood & Drain hydroponic systems, for production from October-May. The greenhouse is equipped with an Australian growing system called the Rotating Growing System that is 6m-high, has 16 crop layers and rotates every 45 minutes. It is fully air conditioned, with two large chillers. The walls are double thickness polycarbonate panels of 10 mm. The NFT and Flood & Drain systems suit the various types of crops grown at EHF. These units are “more productive, more reliable and cost effective in the long run for investment in a lifetime hydroponic system,” advised Azzato. Water and nutrients are the only elements used to grow lettuces and herbs. The productivity achieved for lettuces is 68 kg per m2 for Boston type butterhead lettuces of 300 grams a piece. “Our production cost is between a local field crop and an airfreight import. It took us three years to educate the clients as well as finding right customers who appreciate European quality produce, that is grown locally. EHF produce achieves a premium price within the local market place, however considerably lower than imported as no duty or long haul freight is required. EHF produce, is all sold locally to Dubai and Abu Dhabi wholesalers and supermarkets. “Hydroponics is becoming a more popular system of production as water is the most valuable and limited element in the area”. Rudi Azzato together with Emirates Hydroponics Farms are the pioneers in the hydroponics agriculture industry of UAE, names that are well respected within the industry. “We are seeing more and more local Emiratis investigating the possibility of converting their traditional farm businesses over to hydroponics, through the government support system,” said Mr Azzato.

Category: Uncategorized
Tags: hydroponic systems, UAE
We use cookies on our website to give you the most relevant experience by remembering your preferences and repeat visits. By clicking “Accept All”, you consent to the use of ALL the cookies. However, you may visit "Cookie Settings" to provide a controlled consent.
Cookie SettingsAccept All
Manage consent