Created 12 years ago by Wal-Mart, this global initiative for family farms is expected to reach sales of $460 billion this year Alain Benvenuti, VP sales at Wal-Mart Brazil received […]
Mon 09/03/2015 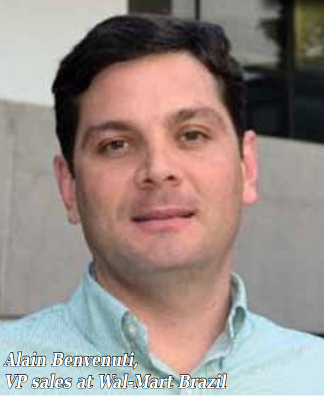 Created 12 years ago by Wal-Mart, this global initiative for family farms is expected to reach sales of $460 billion this year

This innovative project started 12 years ago at Wal-Mart Brazil draws on 52 years of corporate experience within the Wal-Mart group. Today, this initiative encompasses global turnover of $460 billion and by the end of 2015; sales in Brazil alone are expected to reach $1 billion, derived from products grown by 1 million family-based farmers. The goal of the club is to help small producers offer better quality products to end consumers and by increasing the amount of family farms . Only a few hundred families were involved in this project back in 2000 and today it has grown to nearly 9,000. Now covering 18 Brazilian states, the club represents 24.5% of total consumer spending and 12% of the volume of fruit and vegetable comes from Wal-Mart Brazil’s providers . Nearly 500 fruit and vegetable-related items are among the club’s products. The assistance provided to the farmers is huge: technical support; advice on compliance with environmental and labor laws and good farming practices; help with business management, and facilitation of meetings with banks and financial institutions. “The main goal is to facilitate knowledge to the producer and to strengthen the relationship between Wal-Mart and the grower,” Benvenuti said. In this way, the retailer helps families access better quality and more sustainably-grown products. Some of the farmers are also involved in the production of organic food. Besides some signs of inflation, this market segment has became less niche in the last 3-4 years, but the price of organic fresh produce is still 15–20% higher than conventional, according to Benvenuti.

Family farming and sustainability in Brazil

Ranked in 2014 as the 3rd best supermarket in Brazil, according to ABRAS, the Brazilian Association of Supermarkets, and awarded in 2013 as the most sustainable supermarket in Brazil, Wal-Mart Brazil takes a strong stance on this issue. With a turnover of more than $11.4 billion (28.4 billion Brazilian reais)
and 544 supermarkets, the challenge for this retailer and its competitors is to keep consumers’ shopping baskets full.“Over the last 10 years, Brazilian have been going to the supermarket less often, now just an average of 14 times a year, but buying more,” Benvenuti said. Inflation, which was up to 6.7% in September 2014, also remains a threat. Fruit and vegetables come fourth in the ABRAS/SuperHiper ranking, occupying an average of just 6.9% of supermarket shelf space in 2013. Why? Because most Brazilians go to the ‘hortifruti’, the neighbourhood shop selling fruit and vegetables.

Sustainability and traceability are priorities

Safety and transparency in the food chain are strategic pillars for this multinational. Wal-Mart Brazil ensures each level of the production chain adheres to the sustainability policy it established in 2009. This policy makes sustainability a priority not only for the company’s supermarkets and staff, but also its business partners and providers. It is also included in the KPIs for some managers. Its latest move in this direction was the launch of the first fish chain monitoring system, in collaboration with the NGO Sustainable Fisheries Partnership (SFP), which involves measures to help conserve marine and aquatic biodiversity. Wal-Mart Brazil is also continuously working on the traceability of meat, in regions such as the Amazon, highlighting the origin of the meat and supporting family farm suppliers, too. “Food is our number one category worldwide, and we are going to do even more in our grocery business in the years ahead. Paving a sustainable future for food is necessary for society and our business,” said Doug McMillon, president and chief executive officer of Wal-Mart Stores, speaking at the Global Sustainability Milestone Meeting in Arkansas in October.

You can read this article as it originally appeared on page 36 of Eurofresh Distribution magazine number 135 here.

Category: Uncategorized
Tag: Wal-Mart
We use cookies on our website to give you the most relevant experience by remembering your preferences and repeat visits. By clicking “Accept All”, you consent to the use of ALL the cookies. However, you may visit "Cookie Settings" to provide a controlled consent.
Cookie SettingsAccept All
Manage consent