These international forums are the ideal setting for the company to showcase its InstaFresh Juice concept, which embodies the success of its freshly squeezed juice in store, the juice category […]
Wed 26/02/2020 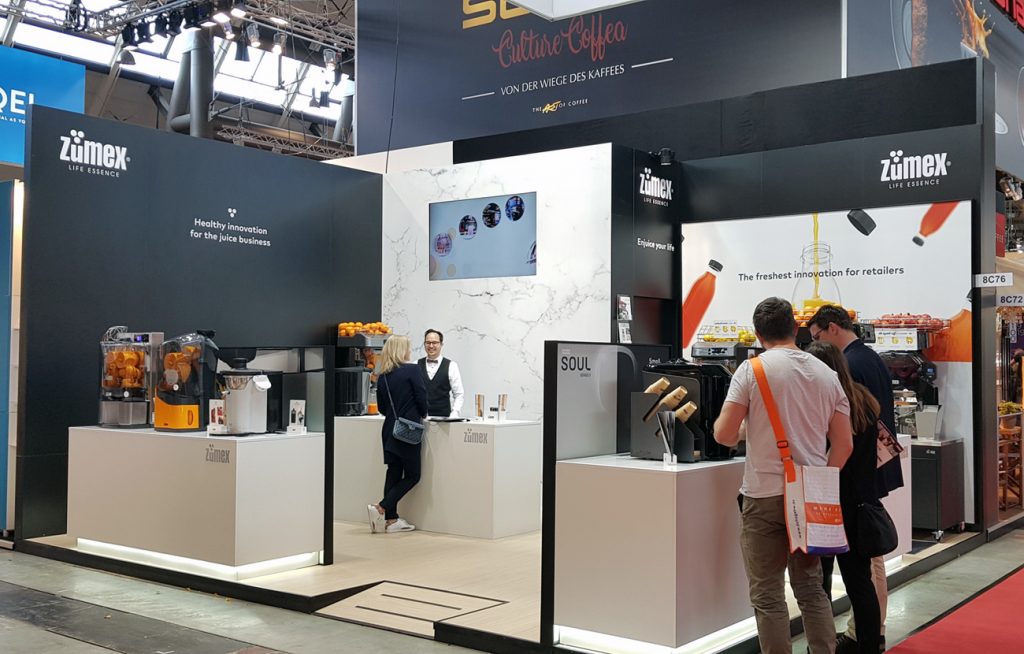 These international forums are the ideal setting for the company to showcase its InstaFresh Juice concept, which embodies the success of its freshly squeezed juice in store, the juice category created by ZUMEX® with the highest retail growth in Europe.

ZUMEX® Group, a global leader in the development of juicing systems, has recently participated in Euroshop and Intergastra, two of the world’s largest retail and hospitality trade fairs, which were held in Germany from 15 to 20 February. At these international events, the company revealed the keys and explained the details behind the European market success of “freshly squeezed juice in store” thanks to its juicing solutions.

As Victor Bertolin, ZUMEX®’s CEO, explains, participation in these fairs is a must given that Zumex is “the juicing solution company with the largest retail and food service share in Europe”. The truth is that the brand’s penetration in Europe continues to grow and it is gaining ground year after year as the sector’s undisputed leader.

Although ZUMEX® still has room to grow in Europe, it has already deployed tens of thousands of units and its machines operate across the continent, from Portugal and Spain in Mercadona, through to the Ukraine in Auchan. Thus, the firm is present in most European markets through national and international agreements with major retailers, such as the French companies Carrefour and System U, and multinational hospitality and food service chains such as Autogrill, Accor, Marriot and NH Hoteles. As a result, it dominates important markets in Southern Europe, such as Spain, in Central Europe, such as the Netherlands and Belgium, and it is also growing strongly in Northern Europe.

In the Netherlands, one out of every two stores has ZUMEX® machines, and it is present in important chains such as Alberth Heijn, Coop, Jumbo and Plus. Such is the firm’s dominance that its market share in the country is already 75% in retail (in stores equipped with freshly squeezed juicing solutions), according to company statistics. In Belgium, the situation is very similar, with a presence in up to 11 retail chains, including Match and Cora.

In Spain, 70% of retailers have already installed the firm’s juicing solutions, including international players such as Carrefour, Aldi and Mercadona. In Finland, the firm is already present in 400 Kesko group stores and it is making progress towards winning other major contracts that will enable it to increase its market share in other Finnish retail outlets.

This robust market share is underpinned by the strategic position provided by the firm’s subsidiaries in the United Kingdom, France and Germany. In addition, the firm, which is a pioneer in automatic juicing technologies, leverages its expertise to build on its partnerships with large food service and retail companies, providing them with advice and guaranteeing high success rates when they consider launching or optimising a juice service. In these win-win partnerships, ZUMEX® acts as their strategic ally in the juice business. The company’s policies aim to meet the demands of its customers and help them anticipate the needs of the end consumer, who expects fresh, genuine, 100% natural, sustainable and easy-to-consume juices in “on-the-go” formats, such as freshly squeezed juice in store, a category that is booming.

InstaFresh Juice by ZUMEX®, the concept behind the origin and success of freshly squeezed juice in store

The ZUMEX® InstaFresh Juice concept is behind this successful juice category created by the firm which has become a worldwide trend. This innovative concept is the basis of the firm’s value proposal, which has revolutionised the juice business. It consists of offering 100% natural juice, with all its nutrients, through a transparent process based on the company’s unique Original System®. As a result, its juicing solutions offer consumers a clear, fast and simple way to prepare freshly squeezed juice. Furthermore, this category generates the highest value for retailers compared to other juice categories, with an average price of €3.41 per litre.

Both Euroshop, the largest retail trade fair in Europe, and Intergastra, a biannual trade fair for the hotel and gastronomy industry, have proved to be a great scenario for the company to showcase its latest innovative juicing solutions to potential clients. The star of the first fair was the Speed series, consisting of the Speed S+plus and Speed Up models, the series of citrus juicers designed for high juice demands in food service and retail, together with the new Speed Pomegranates, the first high-performance machine designed to juice pomegranates. In the second event, the new Soul Series 2, an ultra-compact automatic juicer, with a groundbreaking design, robust interior and premium connectivity, as well as the Multifruit, the most powerful and robust range of commercial juicers for the most demanding food service professionals, aroused a lot of interest.

ZUMEX® Group is a strategic partner in the juice business and has been a world leader in the design of innovative solutions for fruit and vegetable juicing for more than three decades. It is present in more than 100 countries through an extensive network of distributors and its five subsidiaries (USA, Mexico, UK, France and Germany), which work closely with its headquarters located in Spain (Moncada-Valencia).

The company is well known for the development of patented technologies and exclusive systems and has three major business lines: food service & retail, food engineering and vending.

Category: Uncategorized
Tag: ZUMEX® Group
We use cookies on our website to give you the most relevant experience by remembering your preferences and repeat visits. By clicking “Accept All”, you consent to the use of ALL the cookies. However, you may visit "Cookie Settings" to provide a controlled consent.
Cookie SettingsAccept All
Manage consent